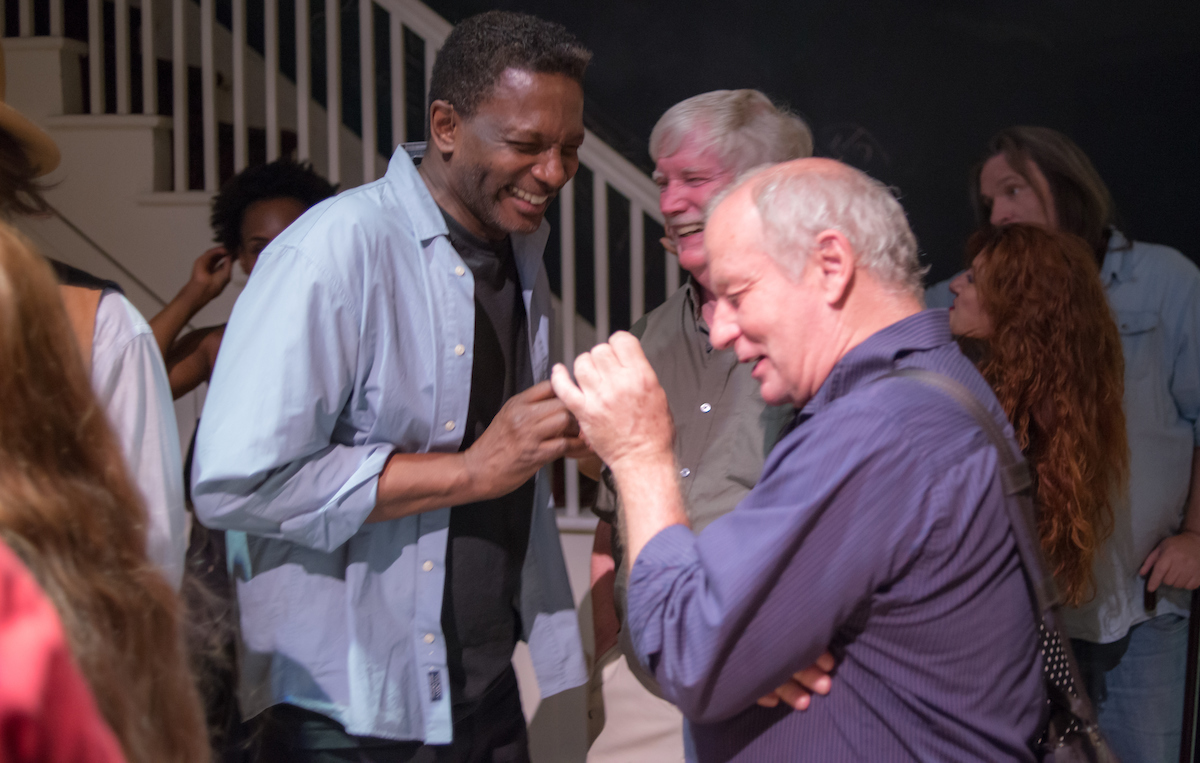 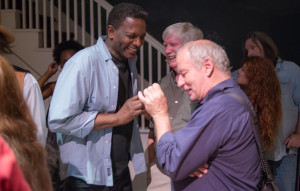 “Performing at Artists Without Walls is a deep privilege and a pleasure. To appear as part of a lineup of such talented artists is simultaneously thrilling and humbling. I always leave AWoW with a soaring spirit, full of gratitude for the gifts of my fellow artists, and newly energized and encouraged in my own work. Mille Grazie to Charles Hale and Niamh Hyland for creating this warm, welcoming community.” Angela Alaimo O’Donnell, poet/author

A witty and humorous beginning to the evening as Giovanni Villari, Janine Hegarty, and Paul Eisemann entered the stage to perform a scene from David Loughlin’s play, “Millennial Discourse.” Soon, ripples of laughter were coming from the audience as David’s comedic look at contemporary relationships began to unwind. Commitment-phobe Emma (Janine) feels as if she’s stuck between a rock and a hard place when her cat-loving work-partner, Anthony, (Giovanni) asks her to marry him. And when the grouchy, eaves-dropping Old Guy (Paul) tells her his tale of commitment-phobe woe, she’s left to contemplate the possibility of moving to Alaska and spending the rest of her life with Anthony.  Is this what she wants?  Whoever thought an afternoon ride on the New Jersey Transit could tell us so much about how we think and feel? 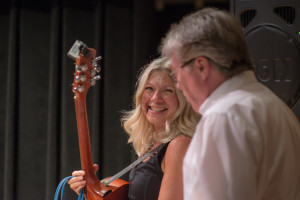 Singer/songwriter Janet Burgan brought three of her newest songs to the Showcase. With her Guild guitar glinting in the lights, she sang about love…all aspects of love. In “Snow Moon,” she told the story of a love that “freezes my soul in endless gloom.” She followed that with a song only a few weeks old, “So Why Am I Crying?,” a funny, in your face song about the end of a relationship. She closed her performance with a screening of her music video, “Seize The Day,” the first single from her new album, Nothing But Love Songs, which you can view by clicking here.  High energy, precise and talented, Burgan is the real deal. Go see her the first Tuesday of the month at Bar Chord, 1008 Cortelyou Street in Brooklyn at 9:30PM. Click here for Janet’s complete performance schedule.  Don’t miss her! 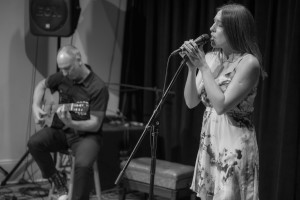 Eliana Gonzalez captivated the audience with a touching rendition of the song “She Used to be Mine”, by Sara Bareilles. Her sensitivity and grace shone through her performance. The joy was palpable during “Andar Conmigo”, the song we all tried to sing along to in Spanish. Martin Fuks, acclaimed producer and composer, skillfully accompanied this singer and actress with a flawless domain of the acoustic guitar. These two Argentinian-born performers are, no doubt, a perfect blend. 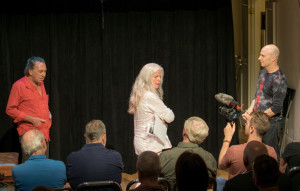 The cast from Peter Welch’s Autumn Stage performed an excerpt from scene two of the first act, and was enthusiastically received by the audience.  The playwright and actors Mary Tierney and Larry Fleischman received dozens of compliments about the work afterward. A number of Artists Without Walls’ folks immediately bought tickets to see the show, which will premiere in two weeks, running from September 4th to September 11th at Theater for the New City’s Dream Up Festival. Tickets can be purchased by clicking here. 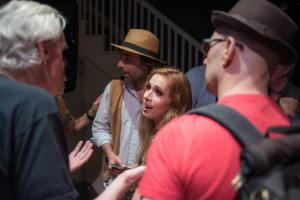 Anana Kaye and Irakli Gabriel were joined at the end of the evening by the world renowned violin virtuoso Deni Bonet and captivated the audience with passionate original compositions – a beautiful ballad “Broken”, funky rocker ” Ain’t Dead Yet” and a particularly poignant “American Smile”, the last two co-written with the acclaimed songwriter Freddie Stevenson. Anana and Irakli, who are originally from Republic of Georgia, are not only first rate songwriters and performers, they are also talented photographers and videographers. They recently released a beautifully crafted an EP “Sentient,” which contains five original songs and is accompanied by music videos which they directed, filmed and edited themselves. You can click here to see them. 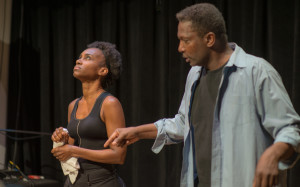 Zhana Roiya,….is one of the newest additions to Artists Without Walls. When actor Sedly Bloomfield asked her to be part of an emotional excerpt from the the Play “Fences” by August Wilson, she jumped at the chance, an opportunity to home her skill in a more intimate setting. This exerpt of the play, takes us on a journey of betrayal, trust and lust, taking the audience on an emotional roller coaster of torment, pain agony defeat and surrender. The passion felt by these two dynamic actors was riveting, an electric clash of two titans….each expressing themselves in ways that left the audience wanting to see more.

Artists Without Walls next event will be a performance as part of Origin Theatre Company’s 1stIrish Fest, called “New York City: A Shining Mosaic.” The performance will take place at Pier A, Harbor House, Battery Place in Manhattan. For further info click here.  For tickets, which are $15 in advance with a small convenience fee, click here.