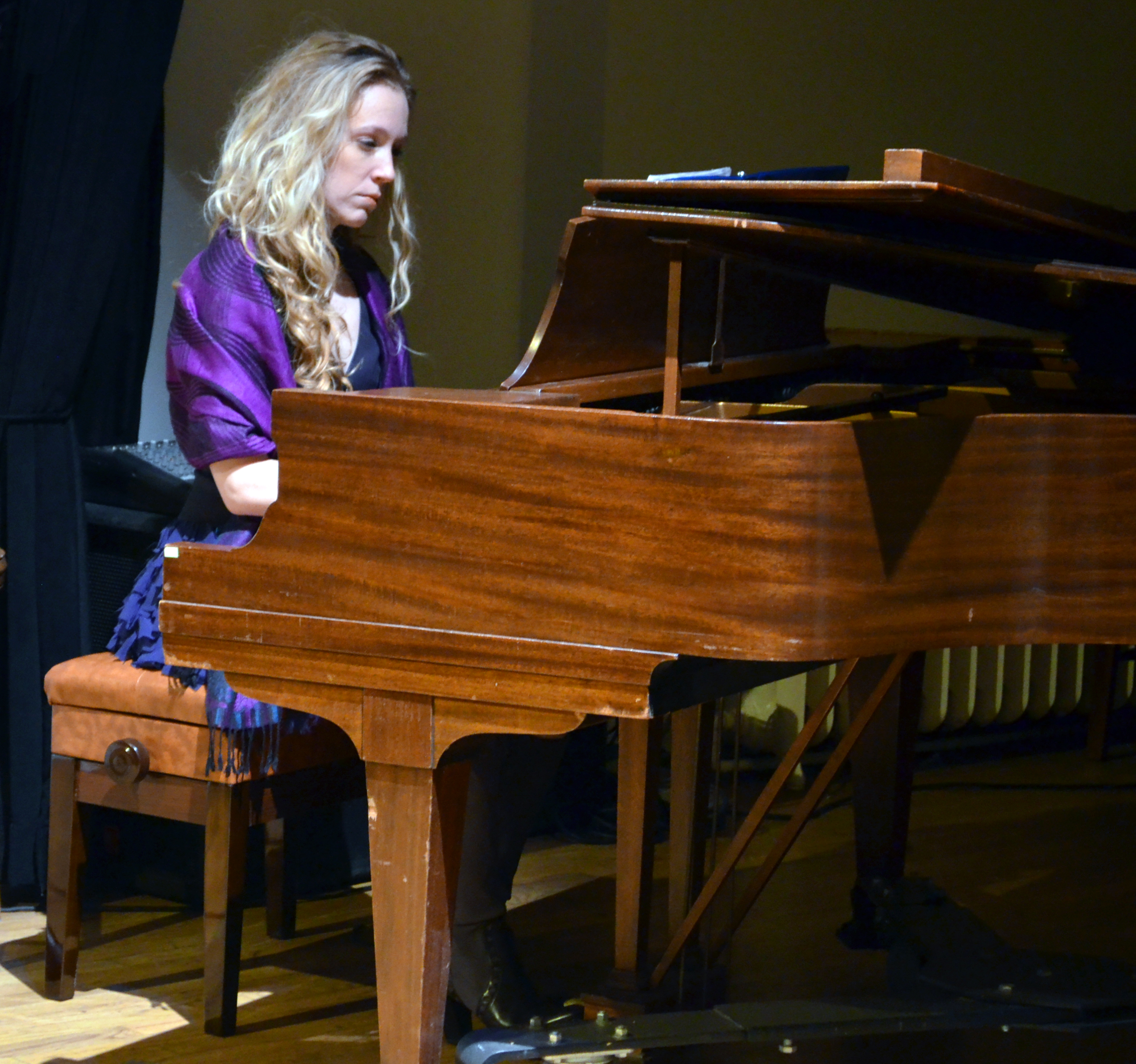 “AWoW, where anything can happen.” Vera Hoar

And Tuesday night’s “anything” was a distinctly multi-cultural night with performers from Macedonia, Bulgaria, Serbia, Ireland, Puerto Rico, the Czech Republic, Germany and the United States. As member Jim Rodgers once said, “It’s proof that AWoW is becoming the United Nations of the cultural scene here in New York City.”

Tuesday night’s Showcase started off with a delightful taste of chamber music. The Trio Samovili, comprised of Macedonian soprano Gabriela Gyorgeva, Serbian flutist Ana Tanasijevic and Bulgarian pianist Aleksandra Kocheva performed three pieces consisting of two arias by GF Handel: Piangero la Sorte Mia (Giulio Cesare) and Ombra Mai Fu (the famed Largo from Xerxes) and culminating with a traditional Macedonian song Zajdi Zajdi Jasno Sonce, which is considered an anthem of the Balkan area. Through their interpretation you could easily feel the special emotions of homeland and the spirit of the Balkan.

In celebration of this month’s 35th anniversary of The National Women’s History Project, Joanna C. Migdal read “Good Night, Noises Everywhere”, a cento (collage-poem) she had composed of lines by 45 of some of her favorite women poets of the past. The audience (including the men!) were moved as the lines of her poetic soliloquy expressed universal and timeless frustrations and anxieties of these women.

With a commanding stage presence and vivacious poems of triumph, tribute, and forgiveness, I.S. Jones’s poetry stunned the audience at AWoW. Her brilliant and heart-warming verse brought the audience from roaring amens to a celebration of the “black body.” I.S. was a delight to experience. We hope to see her again…and again.

Ashley Bell thrilled the crowd with a beautiful performance of Bach/Gounod’s Ave Maria. She then joined forces with Artists Without Walls’ regular, violinist Annette Homann, for an impromptu, spectacular rendition of “The Prayer” by David Foster.

Allison Sylvia performed her anti-strophe, edon.adan, at this past week’s showcase.  “I am endlessly grateful for the opportunity to perform for such a supportive audience,” she said. “There are few words to describe how exciting it was that the audience ‘clapped [that they] believed in fairies.” This is one talented young lady, whose greatness is early in its ascendance.

The opening scene, excerpted from Brendan Connellan’s new play Savage, was just the mix of unsettling darkness and bubbling farce that you might expect from some of his prior pieces, POMPA POMPA, Kill the Bid! or Death, Please! Courtney Torres and Larry Fleischman fully captured the awkward daughter-father dynamic as she dropped on him a very unexpected and somewhat unwelcome piece of news. Mary Tierney directed with great imagination and verve. The full play should be completed in the coming months so the fall out will be further explored! Expect further mayhem!

Martina Fiserova closed out this month’s AWoW Showcase with another spellbinding performance. During her three song set of “Silver Streams,” “Song For Brian” and “A Well” you could hear a pin drop as she wowed the crowd with her voice, her guitar, the piano and the poignant stories she told about where she received the inspiration for the songs. As AWoW member Mitch Traphagen posted after the performance ‘”Go to her shows, look on YouTube — whatever you have to do — she is worth it. An incredible talent.”

Another great evening of multi-cultural talent. The next Artists Without Walls’ Showcase at The Cell will be on April, 28, 6:45pm.

The wonderful photographs of Vera Hora and Mitch Traphagen capture the spirit of another exciting evening of performances at The Cell Theatre, last Tuedsay, March 24th.

Artists Without Walls, in conjunction with the Hofstra University Irish Studies’ program and the Hofstra Cultural Center, will be bringing its “Showcase” to Hofstra University on Tuesday, February 18th, 2:15pm. Over the next two weeks we will be highlighting the performers who will be appearing. We are very pleased to announce that two of the performers are currently studying at Hofstra, Koro Koroye and Priya Gupta.

Nigerian born spoken-word artist Koro Koroye, a Hofstra graduate and current graduate student, imbues the art of storytelling and spoken-word with energy, passion, and strength. Koro has appeared at The Cell Theater, the Living Room and Lehman College in New York City during the past year. Recently, Koro appeared in Charles R. Hale’s production, “Rise Up Singing: Women and the Labor Movement.” Koro both performed and wrote for the show.

We are thrilled to have these two great young talents as part of Artists Without Walls’ Showcase.

One of the objectives of Artists Without Walls (AWoW) is to build a multicultural community that springs from “creative chemistry.” By enabling the exchange of ideas, methods, and creative concepts by connecting people of various cultures and communities who can learn from each other and collaborate to create something new.

A few months ago, after meeting at an AWoW event, brothers from Ireland, Owen and Moley Ó Súilleabháin teamed up with the dynamic spoken word poet from Nigeria, Koro Koroye. They performed new works that bring together Latin Gregorian chant and sacred songs from ancient Ireland with poems-some in Koro’s ancient tribal language–and her contemporary themes of identity and individual expression. In this video, ideas of family, home, migration, self-discovery and transformation are seamlessly presented in a dynamic performance that honors tradition and rejoices in innovation.

We feel that this performance is most representative of Artists Without Walls’ mission.

One of the objectives of Artists Without Walls (AWoW) is enabling the exchange of ideas, methods, and creative concepts by connecting people of various cultures and communities.

A few months ago, brothers from Ireland, Owen and Moley Ó Súilleabháin, teamed up with the dynamic spoken word poet from Nigeria, Koro Koroye, after meeting at an AWoW Showcase.  They performed new works that bring together Latin Gregorian chant and sacred songs from ancient Ireland with poems-some in Koro’s ancient tribal language–and her contemporary themes of identity and individual expression.  In this video, ideas of family, home, migration, self-discovery and transformation are seamlessly presented in a dynamic performance that honors tradition and rejoices in innovation.

We feel that this performance is representative of Artists Without Walls’ vision, developing a multicultural community that springs from “creative chemistry.”

For more information on Artists Without Walls contact info@artistswithoutwalls.com