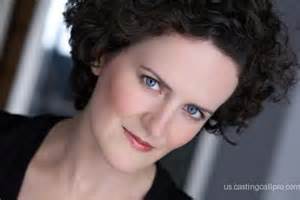 Who is Erin Layton?

I’m a St. Louis, MO native and proud of my Midwestern roots. I attended elementary, high school and college within a ten mile radius of my family’s suburban home so I’m a true St. Louis county girl, born and bred.

The artist, Erin was a wildly imaginative and terribly shy kid content with a box of crayons and yards of blank computer paper. My mom still has stacks of drawings from my early days in a high chair. I was the visual artist of the family and my sister was the actress. I would often do impersonations of Saturday Night Live characters for my family’s amusement but never considered myself a performer much less talented – impersonations came so naturally to me. In my sophomore year of high school, my drama teacher insisted that I audition for the spring musical and though I couldn’t hit a note to save my life, I won her over with my audition for the part of the old mother, Mammy Yokum in Lil’ Abner. She literally shook me and with eyes brim-full of tears told me that I was a natural born 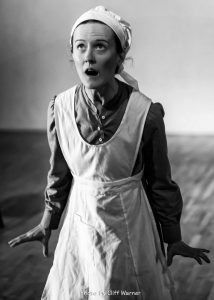 actress. I was cast as the lead (non-singing) roles in every high school play and musical up through graduation. I loved the theatre – taking on the different characters, accents, costumes, never having to play myself. I felt so completely natural and comfortable on stage. The summer before I went to art school I was cast in my first professional theatre gig with the St. Louis Shakespeare Company and received a glowing review from the big St. Louis theatre critic at the time. I was on cloud 9. In the fall, I pursued my BFA in Painting but art school was a blur. I grew quickly bored of the culture – the drugs, drinking, hours alone in a damp studio silently chipping away at concepts that seemed too epic to communicate on the 2-dimensional plane. I learned a ton about my artistic impulses but ached to apply those to the stage. Once I graduated, I threw myself into auditions again and was immediately cast in a tiny Jane Martin two-hander called The Boy Who Ate The Moon, as part of a ten-minute short play festival. My scene partner and I were the talk of the festival. I was hooked for good.

Years later, I devised a new play with an ensemble of actors and writers that introduced me to the Suzuki/Viewpoints methods which altered the course of my life for the positive. It was with them that I discovered my true calling and within a year packed my bags, New York City bound, to study with the Suzuki/Viewpoints founders, namely Anne Bogart and her SITI Company. The SITI Company training and community was foundational and mind blowing.

I’ve been swept under by the expectations that every New York City actor faces about the kind of work you “should be” pursuing – the kind of career you “should be” chasing but have recently emerged realizing that I truly enjoy the challenge and sheer delight of writing and performing for myself. I’ve shared the room with some of the most incredible directors, actors, devisers and writers and hope to continue doing so but it wasn’t until I grabbed the helm and created my own work that the moving and shaking really started happening for me – not them. 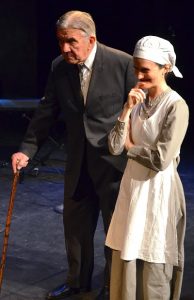 I am presently working on a tour of my one person play, MAGDALEN about Ireland’s Magdalene Laundries in the early twentieth century. I’ve been performing it in NYC for the last couple of years and toured it to a festival in CA last year but am mining Irish communities in New York State who will appreciate its message and want to showcase it as a full production. I’m working with another solo artist on the possibility of double billing our plays as a tour to theatres in rural Ireland next year. I’m also writing a new solo play about my Midwest roots and enjoy sinking into the writing process again, especially exploring some of these old family ghosts.


Do you have upcoming events you’d like people to attend?

The next big event is a performance of MAGDALEN on Thursday, October 2 off-broadway at Theatre Row as part of the United Solo Theatre Festival ENCORE series. I hope to book a few more performances this summer though! 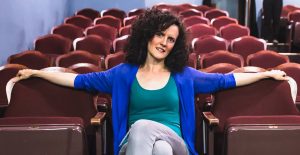 
Who is your greatest inspiration and why?

I’m daily inspired by people – even someone that stands up on a crowded train to offer another person their seat inspires me but in my theatre work, director Anne Bogart is my hero. I’m inspired by Anne’s adaptability as a leader, a thinker, deviser and storyteller. She’s incredibly humble and brave and commands a room like nothing I’ve ever experienced. And with all of Anne’s success, she’s still such an approachable person. I’m sure she has dark days like the rest of us but I truly respect her and strive to grow into my career with the same level of sophistication and grace that she has. 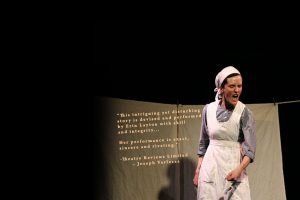 Write a full length play that is not intended to be performed by me. Become an international solo performing artist. Buy a home. Win a really big award for something that I’ve created. Get an MFA.

I love dance, especially original movement. There’s a hip hop dancer named Storyboard Professoar or Storyboard P who I absolutely adore. He trained in classical ballet so he’s strong and fluid but when he moves, he levitates – like a dream. He’s fascinating to watch with a body full of narrative. I’d like to dance like him. I also dream of being a member of Pina Bausch’s Tanztheater Wuppertal Ensemble.

Hours of uninterrupted downtime to daydream, read, cook and hang with close friends.