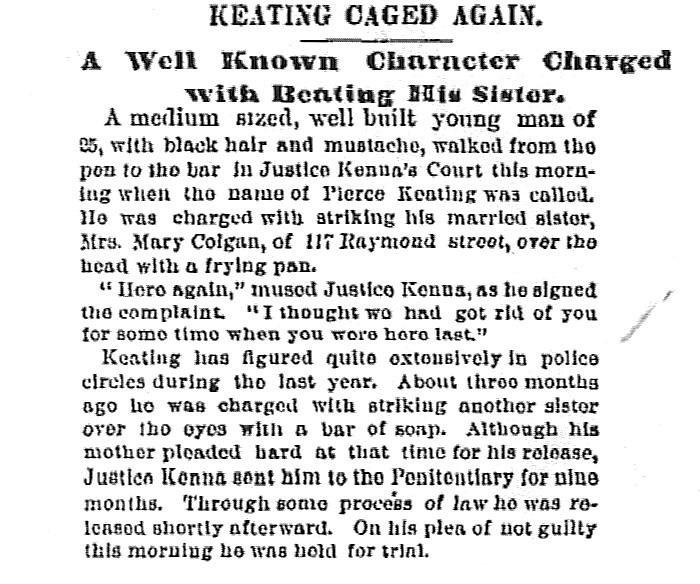 History is replete with stories of the wealthy, but the stories of the poor and dispossessed are rarely recorded.  The Keatings (my maternal grandmother’s grandparents) were poor Irish immigrants and finding material concerning their lives in newspapers or books was improbable.  I discovered, however, if the news wasn’t good, it was possible.

The Keatings, mid-nineteenth century Irish immigrants, including Pierce Sr, his wife, Ella, their son, Pierce Jr, and several siblings, lived at 41 Raymond Street, Brooklyn in a neighborhood that was called Irish Town, now referred to as Fort Greene. The neighborhood was populated by poor Irish immigrants who lived in over-crowded, wood framed houses that were, more often than not, firetraps. My family experienced the consequences of these living conditions when Pierce Sr., my great great grandfather, died in a house fire on August 31, 1884.

Crime was a common occurrence on the street and Pierce Jr was no stranger to trouble. I learned from articles in the Brooklyn Eagle, Brooklyn’s leading daily until it suspended publication in 1955, that Pierce was arrested twice for crimes committed on Raymond Street. He was arrested once on morals charge and once for assaulting his sister with a frying pan. He served time in the Raymond Street Prison, located one block from the family home.

The neighborhood was wretched. Public drunkeness was a normal occurrence.  On the morning of November 8, 1886, James O’Brien, one of the Keatings’ neighbors living at 44 Raymond Street, while drunk on the street and right in front of the prison, amused himself by firing off a revolver.  He was promptly arrested, but soon escaped. He was re-arrested a day later and sent back to the Raymond Street Prison where he spent ten days for drunkeness and another ten days for firing the pistol.

I thought I’d learned all I could of Pierce’s life until earlier this week when I conducted an online search. Might there be a new lead? And to my surprise there was. I found Pierce’s name in a story “Gangs of Brooklyn,” from the blog of Eamon Loingsigh, Artists Without Walls’ member and author of the recently published book Light of the Diddicoy.

It seems Pierce was a member of the “Myrtle Avenue Gang,” a group dedicated to crime and debauchery.  Here’s what Eamon wrote:

Myrtle Avenue Gang – (1872-1885) Known as simple hooligans who were charged with assaulting many police officers and drunken rowdyism. In 1883 one member interrupted a Civil War Veterans picnic at the old High Ground Park (no longer exists) at the corner of Myrtle and Throop. He was “put out” three times, the third time he punched the officer who clubbed and arrested him. The gang assaulted another police officer also that year by throwing paving stones and fighting him while “working the growler” and getting themselves drunk and loud by singing old songs. At one point the gang split in two, the “Dusters” supported by the much bigger Jackson Hollow Gang, and the “Barkers,” who clashed at a saloon at 254 Myrtle Avenue. Neighborhoods they roamed: Bedford-Stuyvesant, Bushwick, Some of the gang members were: Joe Grapes, Paddy Burns, Scabby McCloskey, Patrick Lally, PIERCE KEATING, Maggie McGrath, Dan Callahan, John McCann, John March.

Pierce, Jr. lived a short life. He died at the age of 26, in 1888.  His cause of death is listed as mitral insufficiency. Exhaustion was a contributing factor. A short and fast life ended in fatigue and exhaustion, a not uncommon fate for a nineteenth century Irish immigrant.

I’ve often wondered what it must be like to live one’s entire life in a small town, surrounded by the same sights and sounds, day after day. Brooklyn was not a small town, however, most immigrant’s lives were not lived wandering through the borough. Their lives played out on the living theatre of each individual street, amongst the poverty, the fires and the crime, the horrors of prison, forever surrounded by the chaos of everyday life.

If you would like more information about the gangs of Brooklyn I highly recommend Eamon Loingsigh’s blog,  “Blog for the Auld Irishtown. ” The blog is the home of the Auld Irishtown trilogy, historical novels about Liam Garrity, a 14 year old Irish immigrant, and the White Hand Gang, a gang that called its home the docks and piers along the Brooklyn waterfront during the early part of the 20th Century. The first book in the trilogy is called, Light of the Diddicoy. (Click on the title to see reviews or to purchase.)

Here is what author Malachy McCourt said about Eamon’s book: Light of the Diddicoy is an amazing series of literary leaps from terra firma into the stratosphere above. The writing embraces you, and his description of the savagery visited on poor people is offset by the humor and love of the traditional Irish community. Yes there is laughter here too and it is a grand read, leaving any reader fully sated. Don’t leave the store without this book.”

Who is Eamon Loingsigh?

Author of fiction, including Light of the Diddicoy (Three Rooms Press) and Irish-American historian. With boots on the ground, telling the tales of those who have to fight from the very bottom of the social strata with dignity, humility and hard work as their only weapon. When there was not a system in place to help them, people still survived and fought as best they could to support their families and make a living. This poetry made from real life is the inspiration for my writing.
What are you working on at the moment?
The second book of the Auld Irishtown trilogy (Light of the Diddicoy is the first). 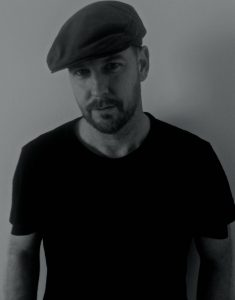 Do you have upcoming events you’d like people to attend?
On April 10, I will be reading with Terry Golway at the Cranford Community Center, Cranford, NJ. I will also be attending and reading at the April 22nd Artists Without Walls’ Showcase.
Who are the writers, past and present, you admire?
I have so many writers that I admire and learned from. Some writers I emulated when I was younger, as many writers do, and others I studied. For a writer, establishing style and voice is of the greatest importance. It takes great soul searching and it takes a lot of missteps and mistakes. Over time, while reading others’ works, I learned that being myself was a great exploration and freed me from my own expectations.

Name five things you’d like to do or accomplish in the next five years.
I’d like everyone to know how to pronounce “Loingsigh” as “Lynch.” Also, finish the Auld Irishtown trilogy and another book of poetry and maybe another novella. I would really like to establish myself not as an “Irish writer” but simply as a “writer.”
What do you enjoy doing in your spare time?
Reading, what else? Also love being with children.
×
Loading Comments...