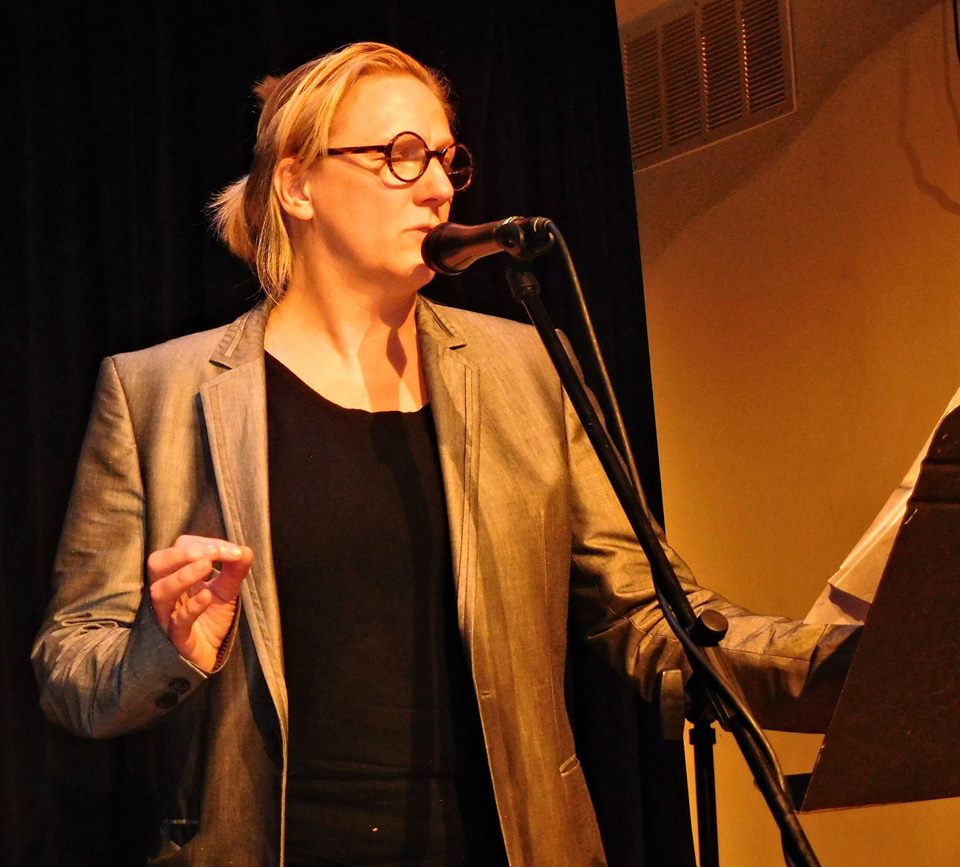 Honor Molloy’s play “Crackskull Row,” which is directed by Kira Simring and stars Gina Costigan, John Charles McLaughlin, Terry Donnelly and Colin Lane, will be performed at the Irish Repertory Theatre from February 3 to March 19. Click here for ticket info and details.

My Father. John Molloy was born in 1929 and came of age during a bleak time in Ireland’s history when a third of the nation’s children left school at the age of fourteen. He was one such child.

Home was no better than school. His father was a man quick with the belt and the fist. Dick Molloy beat his wife when she was pregnant and killed an unborn baby. He did this several times. He beat my father.

He beat his rage into his family again and again. But his anger, his disappointment in life was never put to rest.

Dick Molloy was a dairy farmer with a bad case of tuberculosis. The family hid his disease from the customers, but he couldn’t keep it from his son. He gave my father TB.

From the age of 17 to 23, my father toured the chest hospitals of Dublin. Conditions in the sanatoria were dire. The shame of being poor was added to the shame of being sick. A starvation diet and death all around.

My father left the sanatorium with half a lung and a burning desire for all the sex and booze and theater he could grab. A rogue and a charmer, he married his exact opposite: my mam.

Together they made theater and children and life was marvelous for a time. But my father was sinking into a sea of mental illness, addiction, self-annihilation. He was drowning.

And he was punching.

Any Irish person knows the particular way personal and national history are intertwined; we are cursed with an especially vivid sense of ourselves as figures in an historical continuum. As an eighth-generation Dubliner and expatriate, such is my lot.

Just before I turned five, the IRA celebrated the semi-centennial of the 1916 Easter Rising by blowing up Nelson’s Pillar. As granite chunks thundered down upon O’Connell Street, my father happened to be passing by. He picked up Lord Nelson’s sword and hid it under our couch. I always thought he brought war home in that sword because, soon after, my family was shattered to bits. And we fled to America without him.
I can’t fix my father or repair our family, but I can try to understand why this happened. How. I took a long hard look at the illness and sadness. Hunger and bloodshed.

So, in my imagination, I walked down Dublin’s laneways to my childhood home – a carriage house behind the Georgians on Ely Place.

I went back into the black of Crackskull Row and dug up the stuff of the past – mine, and my homeland’s – the endless cycles and repetitions.

I mean. Can we not stop.

Crackskull Row is not a play, it’s an outcry.

Nancy Manocherian’s play “Hey Jude,” directed by Kira Simring at Urban Stages. Tickets are $45, but AWoW members can get them for $20 by emailing info@artistswithoutwalls.com Performances at Urban Stages, 259 West 30th Street between 7th and 8th Avenues. Fri -Performances: June 14 – June 21 Tues. & Wed. at 7:30, Thurs.-Sat. at 8pm and Sun. at 2pm.

Cellist/pianist Noah Hoffeld will be performing at Bowery Electric, 327 Bowery at Joey Ramone, Place, Wednesday, June 17th, 7:45. Noah will be playing songs from his upcoming album- Play Human. Also ‘save the date, Wednesday August 5th, 8pm for what is sure to be an  amazing CD release party at the Bowery Electric.

What do you get when you throw 3 Moth SLAM Champions together — Adam Wade, David Crabb, Tricia Rose Burt — and mix in a singer/songwriter — Ann Klein — who played with Ani DiFranco and the B-52s and on Broadway with Kinky Boots?  A mind-bending night with a barely-legal dose of hilarity.  Plus there’s an Open Mic at the end (and Open Mic-ers get a 25% discount — 50% if they bring a friend). Friday, June 19, 2015, 8:30 – 10 PM at Spectrum NYC, 121 Ludlow St. (betw. Delancey & Rivington).

Big Block Party in Greenwich Village! AWoW member Deborah Monlux presents: Catahoula Cajun Band at a street dance set in Manhattan on Sunday, June 21st at 4PM on West 8th Street at MacDougal Street (between Fifth Avenue and Sixth Avenue). Dance to the band’s “Northern Fried” Cajun music of Southern Louisiana or sit at a bistro table near the stage and enjoy food and drink from nearby restaurants as you listen. In addition to musical performances, there will be dance, art, and games at the all-day party. Bring your father—and your kids—and celebrate Father’s Day at this pop-up Louisiana dance hall right in the middle of Greenwich Village!

On Thursday, June 11th, 6pm at Cornelia Street Cafe in New York City, Sasha Papernik and Alexander Wu will be officially launching their album, “Four Hand Band.” You can celebrate with them and hear them perform the new album live in its entirety. Poulenc, Gershwin, Bernstein, Berlin, Mozart, Bizet, Chopin…it’s going to be a wonderful night.

Click here for tickets, which are $10. Reservations are strongly encouraged.

Richard Stillman and Flip Peters’ “Spirit of Vaudeville” at The Concert Space at Beethoven Piano – NYC – June 11 @ 8:00 pm – 10:00 pm | 211 West 58th St. (Between Broadway & 7th Ave.) – 10019. Richard’s Show the “Spirit Of Vaudeville” won the Best Concert award at the United Solo Theatre Festival in NYC. This Show takes place in the waning days of vaudeville when the jazz age was in full swing & the Charleston was all the rage. The tale is told through banjo strumming, eccentric tap dancing, vaudeville stories, ukulele & mandolin solos & the Charleston Dance! Concert Charge – $10.00 at the door

As soon as you walk through the doors of Urban Stages Theatre where Nancy Manocherian’s family drama, HEY JUDE is currently playing through June 21st, you are immediately embraced by another dimension. If you grew up in the suburbs, it’s a familiar place filled with the sort of nostalgia that might remind you of your childhood home. There is a Christmas tree, a large, soft, comfortable sofa, the quiet mumblings of a television, even dad is there, fast asleep and snoring in his plush pajama pants. This stage picture is a sweet memory until the play begins. Dad doesn’t wake up and mom rushes into the picture, nervously tackling a large cardboard box and channeling her alter-personality.

HEY JUDE is rife with tension. Anna’s troubled. Henry, Anna’s husband is despondent and passive. Jude, Anna and Henry’s son is on the edge of adulthood, questioning his identity and seeking to draw closer to the truth – his truth. Jude is adopted. He’s a young man, eager to discover himself and understand more about his roots but it’s bad timing. Anna has slipped into some sort of delusional reality colored by Beatles songs and disturbing machinations which was possibly prompted by a religious conversion, which may have been prompted by regrets about her past. Henry doesn’t care and his health and mind are slipping as well. Jude is left to his own devices, trapped in a world that should be safe but is instead completely unhinged. Christmas cheer cannot bring joy to their story. The only way out is to acknowledge the truth but no one in this play is able to.

Director, Kira Simring and her production team – set designer, Peiyi Wong, lighting designer,  Gertjan Houben and M. Florian Staab on sound, have crafted an environment that match Anna’s state of mind – a place as surreal as it is hyper-realistic. This clash is both disturbing and oddly comforting. Both the production design and performances (particularly Adam Weppler in his tragic portrayal as Jude and Larry Cahn as Henry) come together to expertly portray the reality of family dysfunction. Behind the walls of a broken home, you have two choices. You either fight the pain or you disengage from it altogether. While HEY JUDE is difficult to witness, it’s only because of its stunning accuracy. I applaud playwright, Nancy Manocherian’s bravery for transporting us there.

Why attend an Artists Without Walls’ Showcase?  Here’s what poet Connie Roberts said about a recent event. “It was a thrilling, life affirming night—life-affirming in the sense that an Artist Without Walls’ showcase highlights beautifully, often spectacularly, our shared humanity. In our fast-paced, rat-race lives, it is easy to feel disconnected from the world, from our fellow man/woman. But then you have a space like AWoW has created, where people bring their stories and share them—their hurts, betrayals and joys—in various mediums, with a bunch of other folks, who have their own stories.  It’s as if by magic, the whole room experiences a sense of connectedness, real-time affirmation that we’re all part of a rich and complex tapestry.”

We have a great line up planned including Mark Donnelly who will perform the opening monologue from his new play No Dead End. Set in Los Angeles in the late 1980s, No Dead End explores the blurring of movie fantasies and reality through the friendship of a film librarian and an aging actor. Mark writes plays, poetry, short stories and nonfiction. Mark holds an M.F.A. in Creative Writing from Brooklyn College and is an adjunct English professor at St. Francis College in Brooklyn Heights.

Honor Finnegan is a Kerrville New Folk Song Contest Winner, and an accomplished vocalist. She will be sharing a couple of her songs, and covering one by Christine Lavin. Aviv Roth will accompany her on guitar. She will be peddling CDs so bring your spare change.

Renata Hinrichs, a Cannes Film Festival and Obie award winning actress, will present a section of Random Acts, a solo piece she wrote about growing up on the South Side of Chicago in the late 60s.  Her father, a young Lutheran minister, wants to change the world, and her mother just wants to be the perfect pastor’s wife. Renata is performing in the United Solo Festival on Theater Row, Sunday, Oct 12th at 2 pm.

Singer/songwriter Warren Malone loves to sing, write songs and play guitar.  “I love traditional folk music as much as I love a great pop song. The first record I ever put on was a Hank Williams’ record when I was four years old. As a kid I loved Elvis.” Joining Warren on the piano for some old time rock ‘n’roll will be his son Gibson Malone. If you haven’t heard these two play together you’re in for a treat.

Nicholas Garr has appeared in film, TV and Broadway. “Lobsterman” is an excerpt from his solo play, Paper Tigers.  Nick appeared at a Showcase earlier in the year and meshed his great physicality and comedic skills with piped in sounds as diverse as spraying mouthwash, bullets flying through the air and screams to create an intense piece of theater.

Martin Kleinman, a native New Yorker, who was born and raised in The Bronx, returned in 2010, after living in Manhattan, Jackson Heights and, for 25 years, in Park Slope, Brooklyn. Over the years, he has written a novel, screenplays and a recently published collection of New York-centric short fiction. Martin will read a short section from that collection, from the story called “Home Front.”

Steve Simring is a forensic psychiatrist with more than a passing interest in theater. In his quest to understand his long deceased mother, he has attempted to channel her and explore her long and problematic marriage to his father. He’ll be doing just that on stage this Tuesday.

And maybe a short film and an additional song or two. So join us Tuesday, August 26, 7pm for a great night of entertainment and conviviality at The Cell Theatre, 338 W23rd St., NYC. See you there.