Artists Without Walls in this week’s Irish Echo, featuring photos from AWoW’s Collaboration Night at the Cell and Charles R. Hale’s “Rise Up Singing: Women in the Labor Movement.” Photos by Vera Hoar and Cat Dwyer. 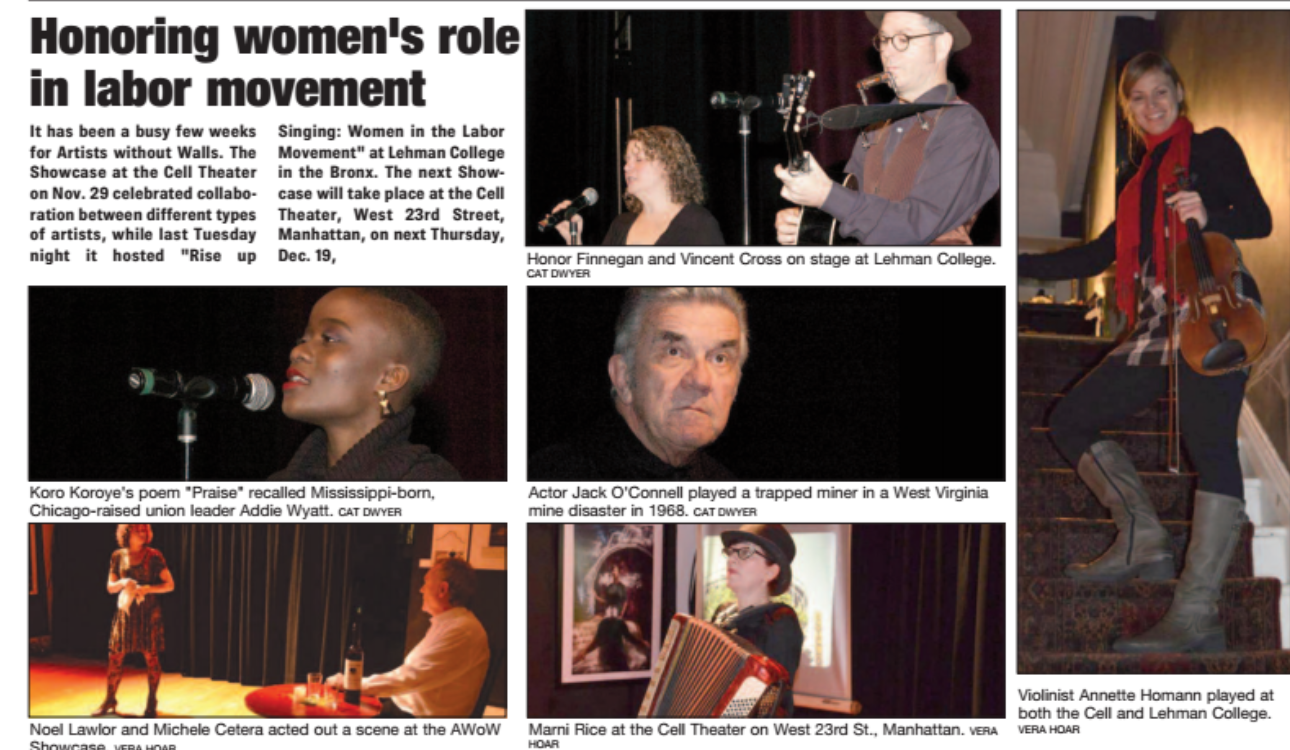 Some comments from Tuesday night’s Artists Without Walls “Collaboration Night.”

“Once again I thank you for the wonderful opportunity and venue you have provided for artists to showcase their talents.” Ron Vazzano

“The photos capture the sweetness and magic of that night!” Jenai Huff

“I still have a smile on my face since Tuesday night, it was so much fun.” Tzila Levy

One of the objectives of Artists Without Walls is for members to collaborate with other artists of the same or different disciplines. Over the course of AWoW’s first ten months we’ve had a number of collaborations that have led to some wonderful performances and we know, given the opportunity, there are many more waiting to happen.

Last Tuesday AWoW had it’s first “Collaborative Night.” Six groups of three or four members, who have worked together for the past two months, presented short works. The idea behind the event was to get the creative juices flowing and come up with something creative and entertaining.

The evening began with a short work written by Honor Molloy and Joe Goodrich. Caroline Winterson and Annette Homann were wonderful as a woman looking for love and another looking for work in “Looking for Love in All the Wrong Places.” Charles Hale played the shifty and lubricious, bar owner/pianist.

Marni, Rice, Jack O’Connell and Guen Donohue each showcased their special talents in a skit about Coney Island circa 1970. Marni’s accordion, Jack’s “barking” and Guen’s yearning all worked brilliantly together and perfectly captured a “gone-by” era.

Singer/songwriter Jenai Huff adeptly wove two songs through Cynthia O’Neale’s compelling reenactment of a story of her character Nora from her book, “Norah: The Making of an Irish-American Woman in 19th-Century New York,” and Joanna Rush’s dramatic performance of a character from her solo play “Asking For It.” The skit was titled “Women Who Rise Up Through Adversity.” This radiant trio gets the award for having the most fun.  What a delight!

Noel Lawlor and Michele Cetera presented “Private Illusions”, combining Tennessee Williams, “Glass Menagerie” and “Streetcar named Desire.” Two different plays, two different characters and yet the protagonists, Tom and Blanche, have much in common. Each creates their own “private illusions” to cope with life’s disappointments and lost dreams, while never escaping ghosts from the past. Great work from two fine actors.

Fiddler and singer Deni Bonet opened her group’s skit with a stirring rendition of her song, “One in a Million” and then proceeded to create evocative moods for the wonderful poetry of Ron Vazzano and Mary Tierney.

All photos were taken by Vera Hoar.

The names appear above the photos. 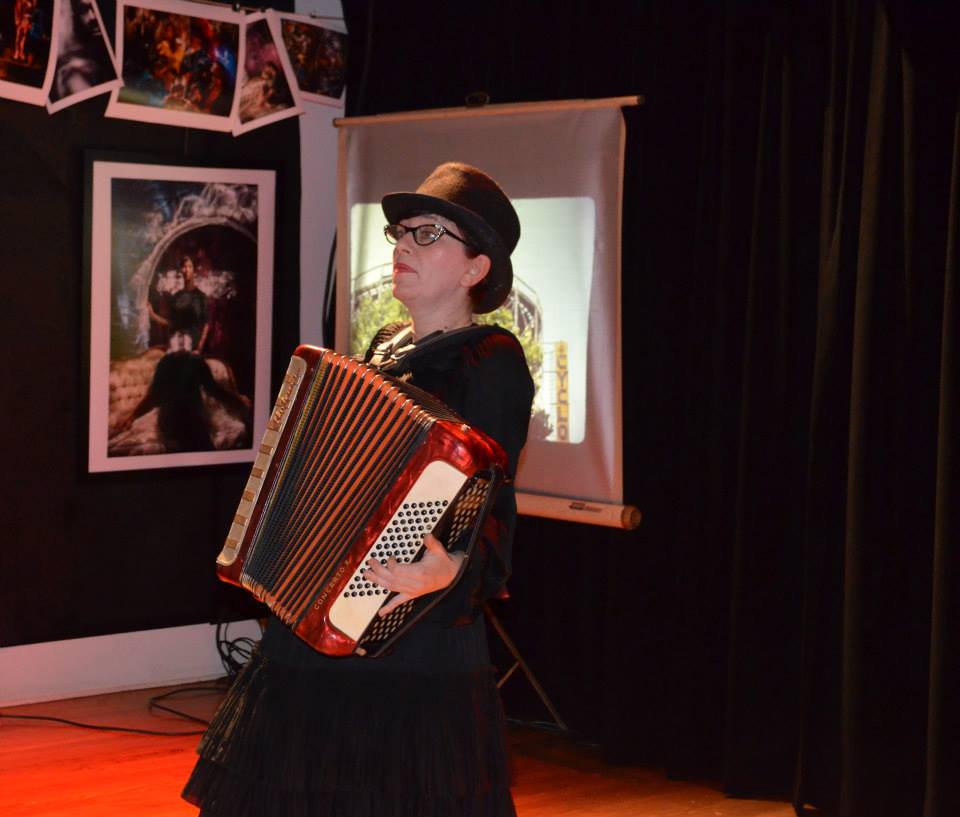 The audience including Brendan Connellan and John Moran. 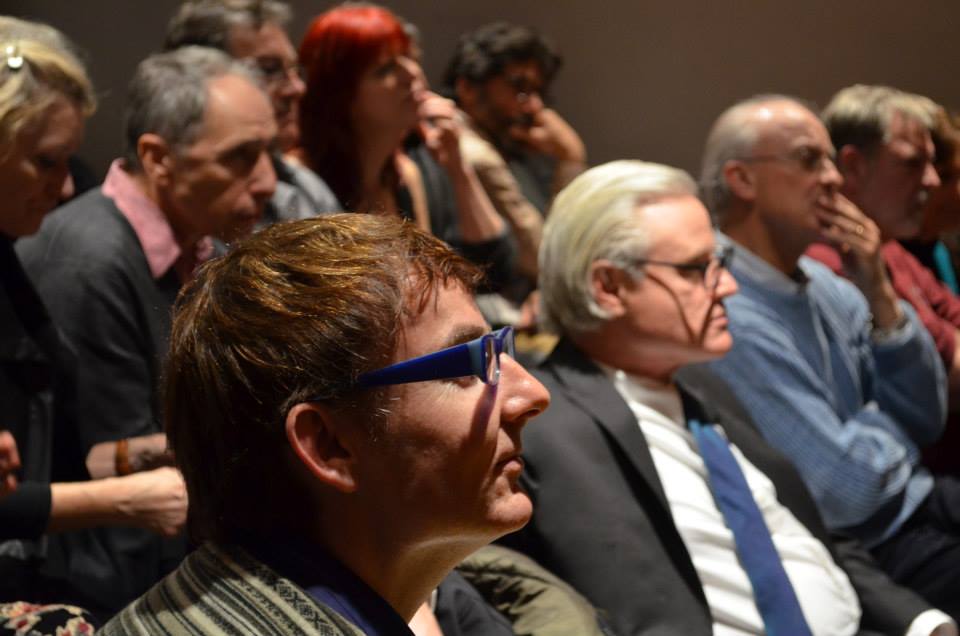 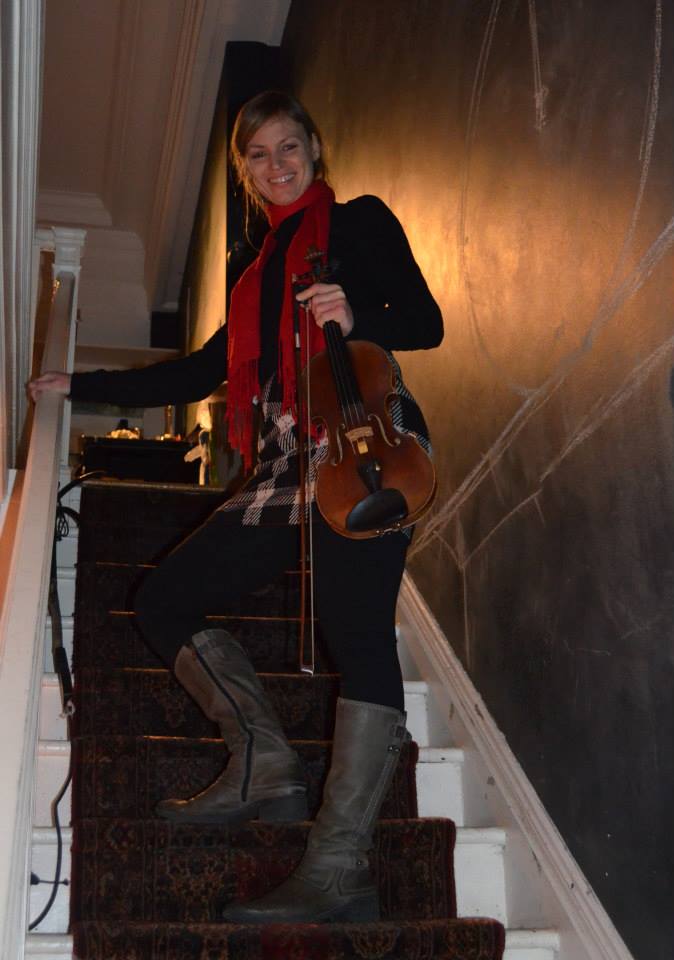 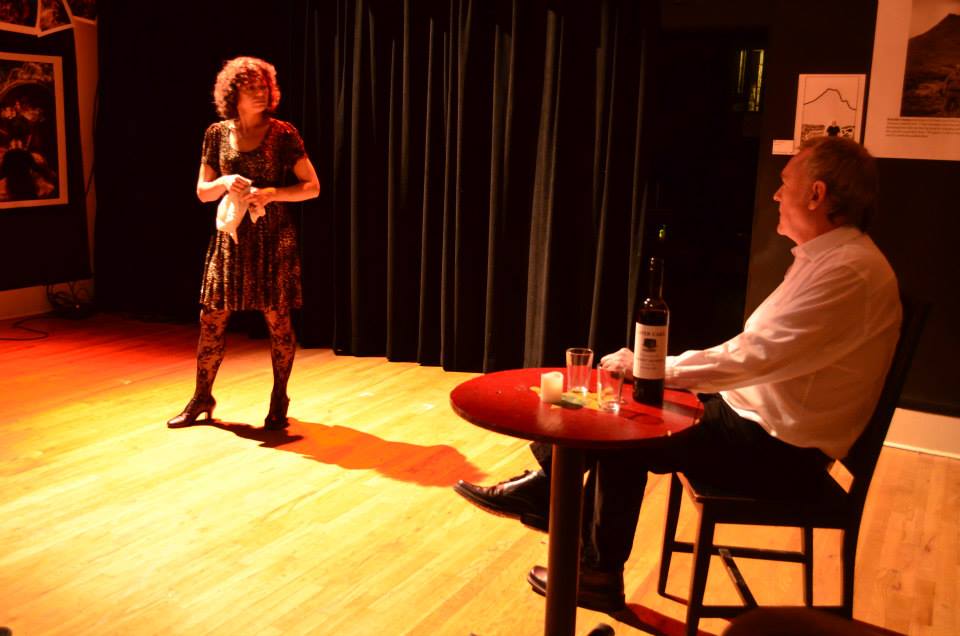 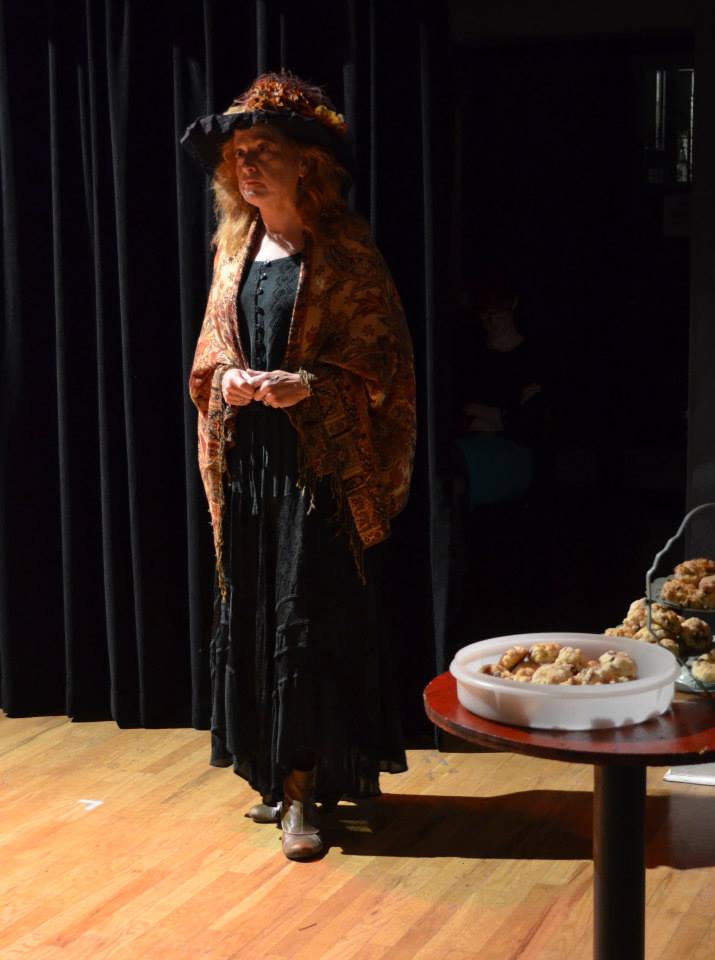 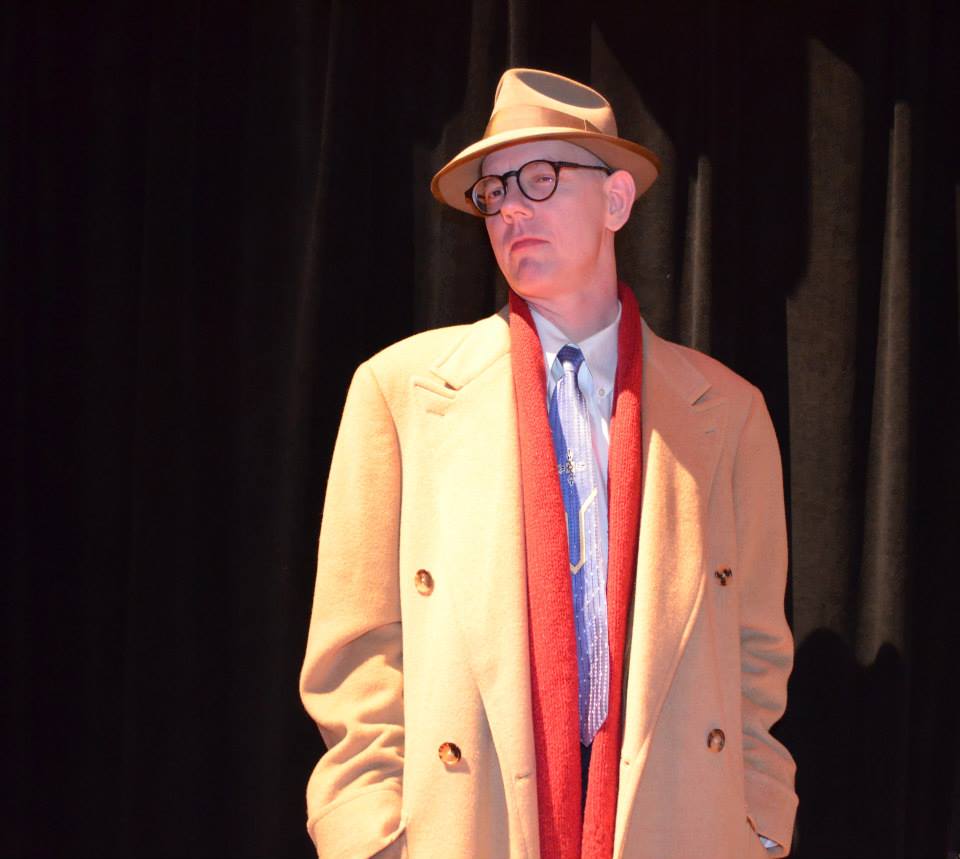 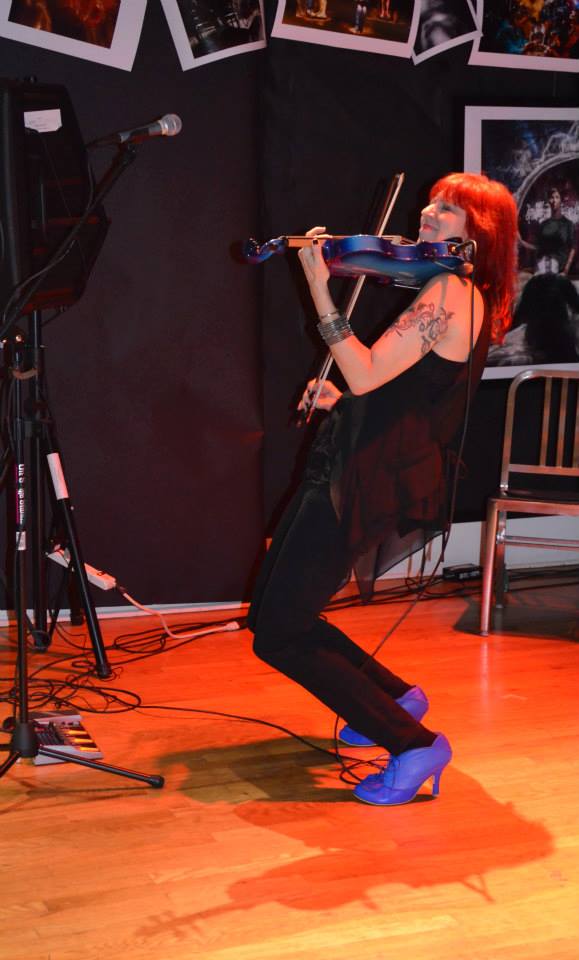 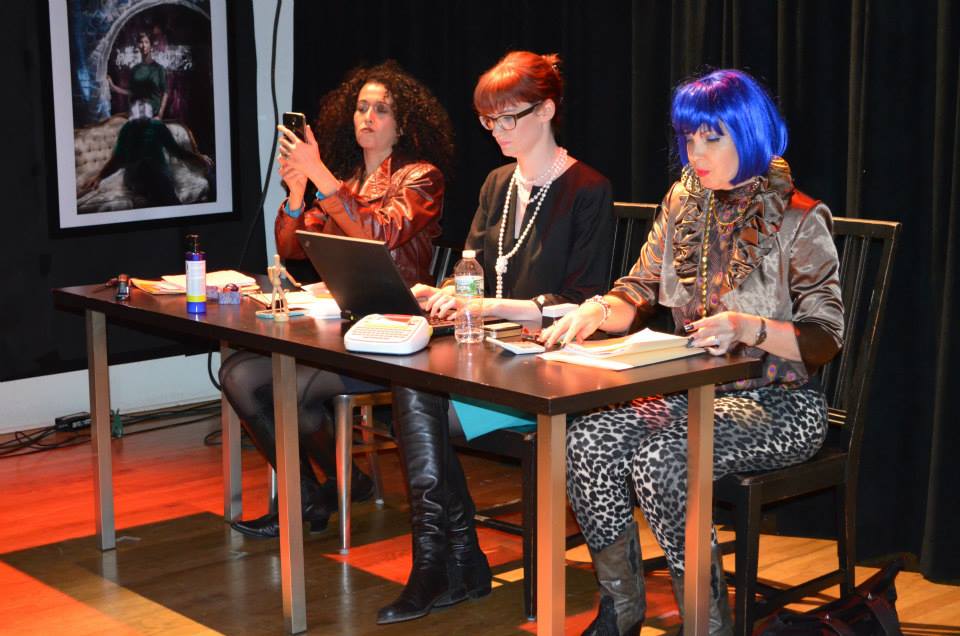 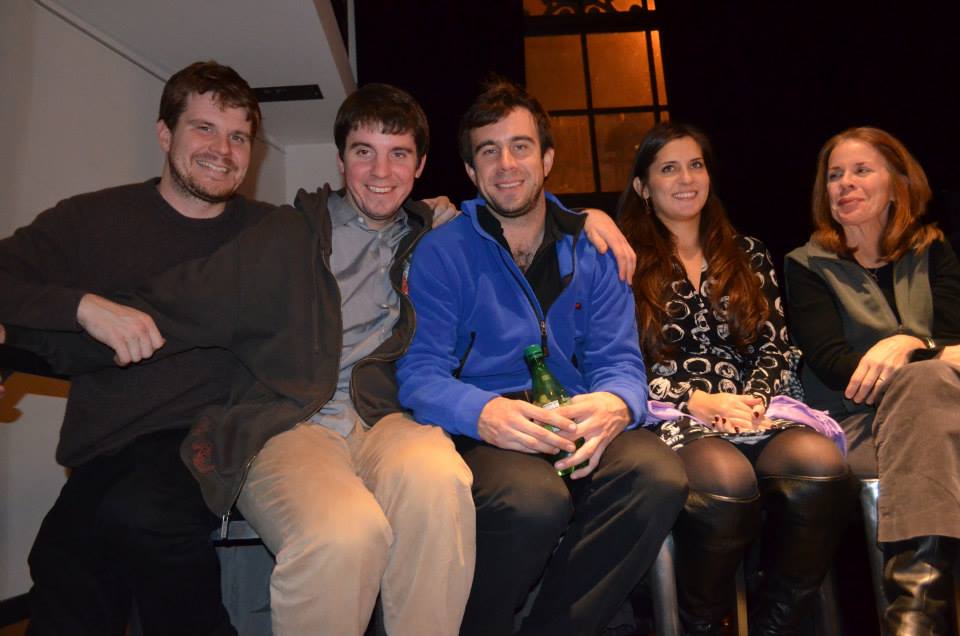 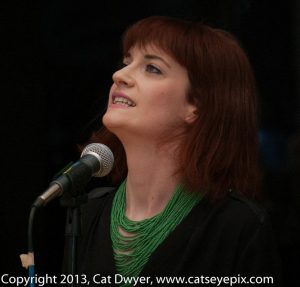 One of the objectives of Artists Without Walls is for members to collaborate with other artists of the same or different disciplines. Over the course of AWoW’s first ten months we’ve had a number of collaborations that have led to some wonderful performances and we know, given the opportunity, there are many more waiting to happen. 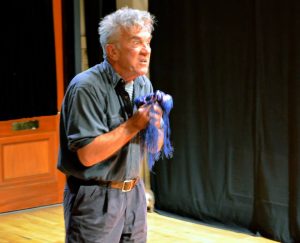 Tonight, Tuesday, November 26th at the The Cell Theater, the evening is dedicated to the collaborative process. Six groups of three or four people have been working over the past month on ten-minute presentations. For example, a group might have an actor, a dancer, a musician and a poet and another might have a singer, filmmaker, playwright and a spoken word artist. All the groups have written their own presentations. The idea behind this event is to get the creative juices flowing and come up with something creative and entertaining. We all know that pushing ourselves beyond our self-imposed boundaries is most often a way to expand our art.

We think this will be a special evening.

Looking for something fun and interesting to do tonight? Looking to hang out with some creative folks who are incredibly supportive of each others craft. Then join us at The Cell Theater, 7pm, 338 West 23rd St., NYC.

We hope to see you there.

One of the objectives of Artists Without Walls (AWoW) is enabling the exchange of ideas, methods, and creative concepts by connecting people of various cultures and communities.

A few months ago, brothers from Ireland, Owen and Moley Ó Súilleabháin, teamed up with the dynamic spoken word poet from Nigeria, Koro Koroye, after meeting at an AWoW Showcase.  They performed new works that bring together Latin Gregorian chant and sacred songs from ancient Ireland with poems-some in Koro’s ancient tribal language–and her contemporary themes of identity and individual expression.  In this video, ideas of family, home, migration, self-discovery and transformation are seamlessly presented in a dynamic performance that honors tradition and rejoices in innovation.

We feel that this performance is representative of Artists Without Walls’ vision, developing a multicultural community that springs from “creative chemistry.”

A special and unique collaboration has begun  between the Irish Folk singer Mary McPartlan (who is in New York on a Fulbright Scholarship) and Jazz pianist Bertha Hope, one of the great exponents of the jazz idiom. Mary and Bertha, who both embrace AWoW’s multicultural approach to the arts, met when they each performed at an AWoW Showcase earlier in the year. The two women quickly hit it off and embarked on a new collaborative effort, which combines Mary’s Irish folk style and Bertha’s jazz piano.

Mary McPartlan has a high profile in Ireland as a  tradional and contemporary folk singer with extensive rave reviews for two recent award winning albums The Holland Handkerchief and Petticoat Loose.  Mary recently recorded a song with a poem from the now President of Ireland Michael D Higgins dedicated to the Chilean poet Victor Yara.  Mary McPartlan Website

Bertha Hope has led an all american women’s ensemble JASSBERRY JAM for 15 years and is prominent on the jazz scene in the tri-state area. Bertha Hope Website

The collaboration and the making of this exciting piece of art will take place at ZirZamin, 90 West Houston, Friday, May 24 2013, 8pm. The doors will open at 7.30pm promptly and early arrival is clearly recommended. Click here for further details.

Who are Owen and Moley O Suilleabhain? 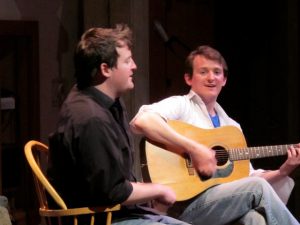 Owen and Moley are brothers from County Limerick and singers of varying styles, from Irish Rap to Gregorian Chant to Irish Sean Nos song.  Owen and Moley’s original songs have garnered much attention from some stellar performers. Among them are English violinist Nigel Kennedy, who invited the brothers on tour, and Russell Crowe who is the executive producer of their current album ‘Happy Songs’.

Two albums on the way! One ‘Folk Songs’ and another which is forthcoming  is called ‘Sacred Songs’. We’ve just launched a new website too! www.owenandmoley.com

We’ll be at The Cell Theatre performing with Artists Without Walls Showcase on March 26th.  Come join us.

What are five things you can’t live without? 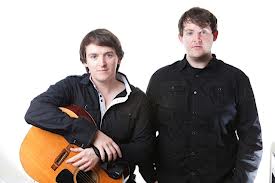 Your favorite quote at the moment and why?

“How good can you stand it,” is a really good mantra, which really dares one to realize and manifest the good things that are about to happen to us all! RECEIVE IT!

Who have you always wanted to work with and why?

We have always wanted to work with Paul McCartney. We find his songs inspirational. Bono wouldn’t be bad, either.

We would have asked all the wrong questions to the wrong person.

We want to set up a circus, and we want to work with a top class choir. We want to perform a month long stint in Las Vegas. Also a full orchestra would be cool…

Collaboration is really the gift that was given to us. We were lucky enough to hang and jam with some amazing musicians over the years, which gave us the ability and confidence to improvise and show our talents in high pressure, but informal environments. The time that people gave us and continue to give is  inspirational!

Nice article in this week’s Irish Echo about Artists Without Walls. (Click on the article to read.)

We’re having our launch–we’re calling our session an “Artists Without Walls Showcase’–next Tuesday, January 29th, at The Cell Theatre, located at 338 W23rd St. in Manhattan. If you can make it, we’d love to see you.