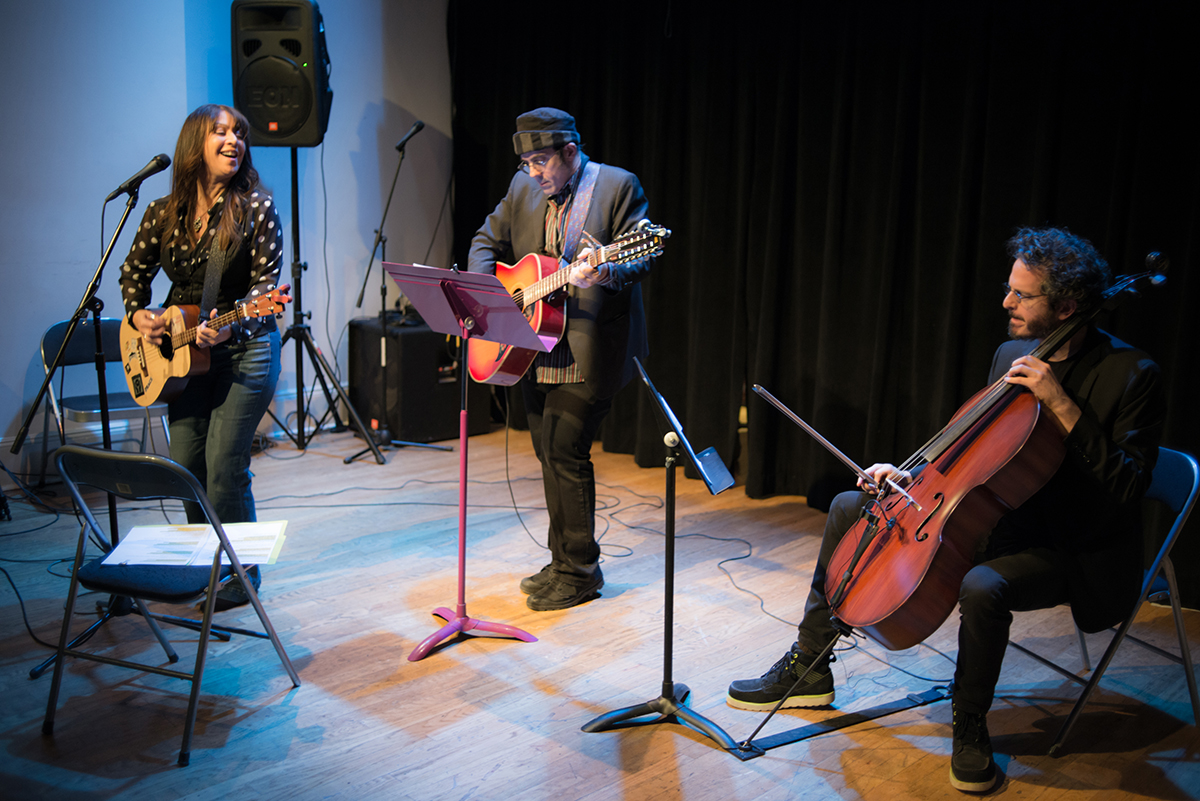 She was the first person I met at my first first Artists Without Walls Showcase at the Cell Theatre. As I made my way to a seat next to her, she just said, “Hi, I’m Deni!” I knew there was something special about her…she appeared to be a bright ray of light with red hair. We talked about music for a few minutes. It wasn’t until later, when I Googled her name, I found out how she could have introduced herself. She could have said, “I once played for the President and First Lady at the White House.” She could have said, “I’m actually kind of famous and have CDs out.” She could have said a lot of things but she didn’t. And Deni Bonet was my introduction to AWoW… It turns out that she wasn’t alone in her grace, modesty and extraordinary talent. There aren’t many like her but there are a few. And they often appear at the Cell…

The chatter isn’t quiet but it isn’t loud; it has a feel-good quality to it. It feels like home. Even for those stepping into the theater for the first time, there are no strangers here. There are no hurdles to conversation, whether in getting a glass of wine or a bottle of water or just joining on any number of loose groups of people talking. Many times the artists are among them.

It is the last Tuesday of the month. And at the Cell Theatre in Chelsea it is the night for the Artists Without Walls Showcase. It is a showcase of incredible people and amazing talent.

Niamh Hyland is a wunderkind with sparkling eyes and a warm heart who could have been an attorney, a business executive, a show host, a Ted Talk vet, or a singer with a voice running an incredible spectrum. Actually she already is all of that. And despite all she is and has accomplished, she still has her dreams; and she works hard to help others achieve their dreams. Niamh is a young woman with an old soul, because seemingly only that could explain her insight and wisdom.

Charles R. Hale, a man of culture and taste who puts on no airs while tracing his roots to the tenements of Lower Manhattan. He, too, could have been anything, and he certainly was something of importance, and in the end he chose the arts, creating an organization to elevate and promote artists; and to continue searching his past, unearthing the lessons his forebears learned. The lessons are often still applicable to all of us today. He has shown that even trailblazers are often able to benefit from a path cleared a century or so ago.

AWoW is a brainchild from Charles. That may sound like a funny word but is is apt. He is much like a father to the members. He is proud of the successes and worries about their hurdles and, despite having an incredibly busy life, he is tireless in promoting the artists and their events.

Charles R. Hale and Niamh Hyland are the co-founders of Artists Without Walls.

When he’s not somewhere else in the world applying his talent and art to sound production, Emmy Award winner Paul Bevan is comfortably behind the mixing board, adjusting and tweaking the sound to optimize each performance. He makes it look easy but it’s not. A typical showcase could include everything from an author reading from a newly released book, to actors performing a vignette of an emotional play, to an amazing, emerging rock band. He probably isn’t working with the high level of equipment he is accustomed to but he makes no complaint. Paul’s heart and soul is in the sound and equipment matters less in his hands.

And then the lights dim and the comfortable, not quiet, but not loud, din abates to silence. The show is about to begin.

The Cell Theatre in Chelsea is a special place. In the heart of Manhattan, the center of the known universe, it is the usual home of the monthly Artists Without Walls showcases.

Charles and Niamh are on center stage to introduce the first artist. Charles provides some background, someone amazing is about to take the stage. Niamh squints to see past the stage lights into the crowd…and then she smiles.

And the show, which is better than any show in the past and will only be topped by the next, begins…

Whether an artist or someone who loves the arts, we would welcome you to join Artists Without Walls. Just click on the “Become a Member” link. We’re looking forward to seeing you at the Cell!

2 Replies to “Artists Without Walls Presents: A Night At The Cell”