“Artists Without Walls creates the space—literally and figuratively—for artists of all stripes to be their best selves, to push boundaries, to experiment, to collaborate in a safe, nurturing environment.” That’s what Connie Roberts, poet and author of “Little Witness” has said about an Artists Without Walls’ Showcase.  Connie’s words provide a perfect description for Tuesday’s Showcase, which was one of the finest and most emotion packed Showcases in the last few years. 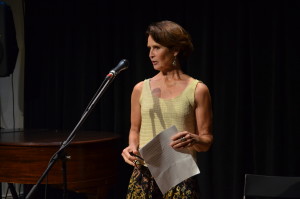 Kathleen Bennett Bastis started the evening with her reading “Man in the Desert” a touching, funny story about how heart break lead her to a spontaneous trip to Burning Man where she found a renewed strength and determination. Who knew that eight days in the desert without a shower could be so cathartic! 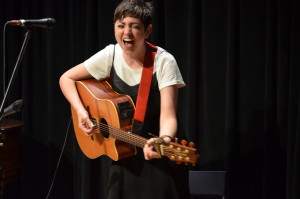 Jenna Nicholls delighted the audience with her voice, singing songs that felt like they were torn from the pages of a 1920’s American Songbook. Songs including “Take Me Out Tonight” and “Back to You” reminded us of a forgotten era… 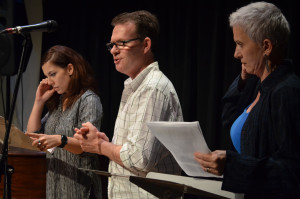 Karin de la Penha and Kimberly Adams were wickedly funny in a hysterical scene from Dublin born playwright Derek Murphy’s new play “Dyin’ For It.” The audience were certainly dying for more of Murphy’s very dark, extremely funny, look at what happens when a very unloved loved-one returns home to die, and potentially ruining Christmas. The writing and the acting were razor sharp. Murphy definitely takes no prisoners with his writing, and his actors thrive because of it.

Alexander A. Wu and Annette Homann 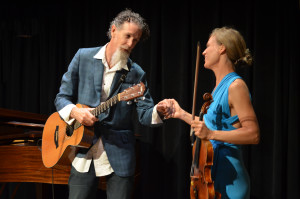 Here’s what singer Judy Collins said about Walter Parks, “Walter is an extraordinary singer whose songs can break your heart as well as get you dancing….Walter is a musical treasure, an artist of the highest caliber. To hear him is to be lifted into a mystical sphere.” How true, as we once again experienced Walter’s lofty talents, performing songs he wrote “Comin’ Home Holler,”  “So Bad, So Good,” and “Butta.” He then asked Annette Homann to join him in “Angel’s Point of View.”  What followed was a special moment–exquisite music filled with tension and emotion from two incredible artists.  Standing ovations and many hugs followed, particularly for Annette, who announced she will be returning to her native land, Germany,  in the very near future.  A wonderful evening of artistic expression, good feelings and friendship.

The next Artists Without Walls’ Showcase will be at The Cell Theatre on August 23. Doors and bar open at 6:45. The performances begin at 7:30.