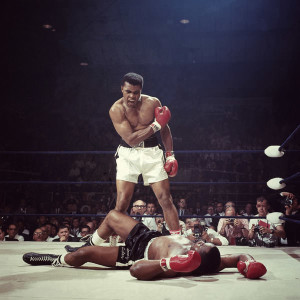 From Sam Edelman’s story “Getting Out of Show Business”

“I totally enjoyed the Showcase. The level of professionalism was captivating, and inspirational…the The Cell is an exceptional venue. Thank you for an enjoyable evening….I plan to be there again soon.” Maia Nero

Sam Adelman opened the evening, reading a humorous piece from his upcoming book “Getting Out of Show Business,” offering an anecdotal account of getting stiffed for cash on an editing job, only to receive a world-famous photograph and a hand shake from Muhammed Ali. This picture was certainly worth a thousand words. A perfect opening to what became a grand evening. 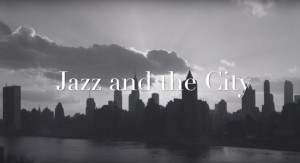 Charles R. Hale, one of Artists Without Walls’ cofounders and a Resident Artist at The Cell Theatre, premiered his short film “Jazz and the City: The New York Connection.” The film is a companion piece to his show of the same name, which debuted at The Cell in April. From the best of times to the worst of times, songwriters have captured every corner of New York City through music. Weaving story, sidebars, images and the music of the Gershwins, Jerome Kern, Johnny Mercer, Billy Strayhorn and others, Charles’s film connects New York City through the songs of the composers and performers who lived in the city, through the venues in which the songs were popularized and through his own recollection of New York and song.  “Sharp film…and that voice…as usual, great tone and presence.” David Goldman 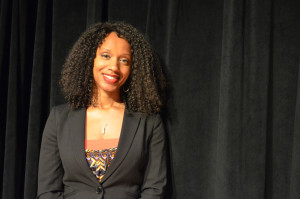 Actor/singer Almeria Campbell followed with a stirring performance combining her acting and singing skills. “Performing at AWoW was my first time singing (outside of voice lessons ) for an audience in quite some time. It was amazing. The audience, or I should say community, is so supportive.” Despite her concerns, Almeria’s voice was in very fine form, seamlessly incorporating two songs, “His Eye is on the Sparrow” and “Maybe This Time” into her presentation. 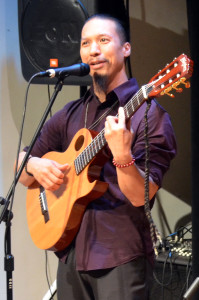 Joel Cruz, the story teller, will make you cry…and then smile. He’s not just toying with emotions; His songs are borne from his personal story. They pull your heart in all directions the way life does.  He takes his time, as if he really wants you to listen and hear. Joel demonstrated  his vulnerable side, sharing his most inner thoughts, but the audience loved and appreciated his work. Additionally, it was a joy to see singer/songwriter Martina Fiserova and Joel perform together. They were clearly having a good time! The music was complex– lots of lyrics, yet catchy enough for listeners to sing along. We look forward to more unexpected surprises from Joel Cruz.

Mark Donnelly channeled his inner child with a funny monologue based on his boyhood desire to be a cowboy and ride the range with Gene Autry and Roy Rogers. But it seems the audience was most impressed with Mark’s father, who stepped up, defended his son, and won the day…and the audience.

David Raleigh was joined by Annette Homann for a moving and evocative “Stormy Weather,” a pop standard built around a classic weather metaphor.  From the moment Annette’s bow struck her instrument, through the moment David sang, “Don’t know why, there’s no sun up in the sky…stormy weather…” through their last playful notes, the audience was held rapt. A beautiful duet.  David closed out the show with a brilliant medley, incorporating tunes by Al Green, Stevie Wonder, George Gershwin and one of David’s tunes,  “One Together.”  The perfect finishing touch to another sensational evening of diverse talents.

The next Artists Without Walls’s Showcase at The Cell, 338 West 23rd St, NY, is scheduled for Tuesday, July 26. The doors and the bar open at 6:45. The performances begin at 7:30.  For more information: info@artistswithoutwalls.com