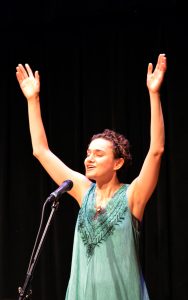 You can watch the artists perform, and meet them as well, at Artists Without Walls’ May Showcase at The Cell Theatre, this Tuesday, 5/24. The doors and bar open at 6:45. Presentations begin at 7:30.

Here are a few of the artists who will be performing:

Allison Sylvia is a poet/artist/dancer who has performed at a number of Artists Without Walls’ Showcases. Here’s what was said about Allison after her performance at “Permutations,” an AWoW/ Kathleen Bennett Bastis collaboration at Chelsea’s First Street Gallery last Spring: “Attention grabbing, fast paced, stay focused so you don’t miss a thought….Allison is not a rapper, but if Socrates were a rap artist you might think of Allison. Brilliant.”

AWoW charter member Brendan Connellan, who has written and produced a number of shows that were premiered on 42nd Street, NYC in the past few years, will be presenting a scene from his play, “Savage.” Appearing in the scene will be:

Courtney Torres, who frequently works with independent theater companies such as Locked in the Attic Productions and Fengari Ensemble. She has participated in various showcases and festivals in the New York City and currently trains at Playhouse West Brooklyn Lab.

Rebecca Lowry, who last appeared on the New York stage in the mid-1990s, when she spent a decade traveling the country as a professional actress performing in everything from Shakespeare to Burlesque. She is currently an attorney and legal writing Professor at Saint John’s University as well as an economic analyst.