This past Thursday, a select crowd, awash in warm yellow light from the small stage at Sid’s Piano Bar in Manhattan, exemplified the name of this organization we’re all so pleased to be a part of. The performers, each revealing what love means to them, dissolved the walls between themselves and the audience and played, instead, to dear friends. The evening became less about the love in each chosen piece than what we all feel for each other as Artists Without Walls keeps bringing us together.

Martina Fiserova kicked off the night of love laced songs with a beautiful rendition of her song  “And Fly” while accompanying herself on guitar. She dedicated the song to the evening’s sponsor Marty Plevel and Marty’s good friend Max Siegel who was also in the audience.  Martina then gracefully transitioned to the piano for two additional spellbinding original songs, 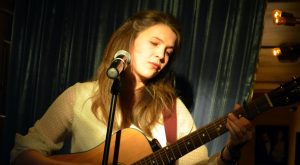 “Misunderstanding” and “A Well”. You could hear a pin drop as she tickled the ivories with passion while showing off her vocal range and unique phrasing.  To round out her stellar set, she performed, for the first time, in honor of the occasion, a superb rendition of Joni Michell’s “Love,” which was originally released in 1982.  As she wrapped up the song with the lyrics “Of faith and hope and love, And of these great three, Love’s the greatest beauty, Love, Love, Love” she set the tone for the evening and had the audience in the palm of her hand.

After accompanying Connie Roberts in her stirring reading of “Raglan Road,” cellist Noah Hoffeld opened his set with an original tribute to David Bowie, for cello and loops. He used the loop pedal to create an atmosphere of mystery and played a moving elegy for his departed hero. He was then joined by a great visiting guitarist, Nathan Finkel from London, who played on two rocking ballads from Noah’s album Play Human– ‘Stay the Same’ and ‘A Woman and a Man.’ Their highly distinct tones were filled with longing. 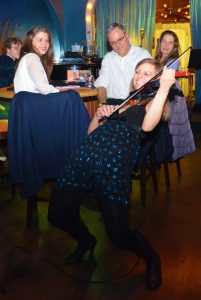 Annette Homann, though unsure of how her act would play out in the confined space of Sid’s, literally leapt from the stage in a whirl of glitter, stomp, and sway. Her “romantic partner” for the evening was a brand new electric violin, which she made wail on Marc O’Connor’s “Caprice No. 1 in A Major” for solo violin, “Feeling Good” and a medley centered around “A Little Party Never Killed Nobody” that had us all grinning to split our faces and a few brave souls on their feet dancing. Annette herself was a dervish of Matrix-like leans and a grin that could have generated the bar’s lights. She filled the room with joy. 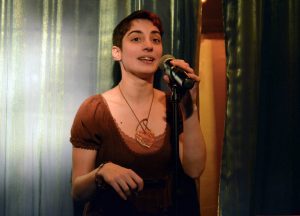 The day after our gathering, Charles Hale told me that he frantically whispered to Niamh Hyland during Annette’s wild joyousness, “Who’s following this?” She answered, “Don’t worry, it’s Liv. We’re covered.” I am still humbled by such faith, especially given that I was so unsure of my place at a performance on the theme of love. I chose a new piece for the occasion, “After Seeing a Facebook Post that Proclaimed ‘Stop Romanticizing People who Hurt You!’” and a piece written for my sister. While I cannot review myself, I saw a woman in the front row clutching her chest and shouting, “Oh my God!” What else can a performer hope for?

My mentor Connie Roberts then returned to the stage unaccompanied, as always the picture of elegance and refinement as she sparked life into WH Auden’s poem “Funeral Blues” with a slow, steady timbre that allowed each word to hit the listener like its own sharp pain. We poets were, neither of us, certain how to keep the sadness of love from our performance choices, but I am grateful Connie grounded us with this blessing. 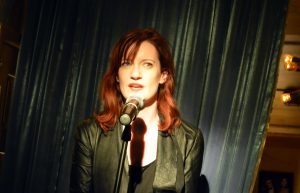 I am never prepared for the voice and stage presence of Niamh Hyland, much less to have to describe it. (It’s very possible that I’ve written and rewritten an ode to this idol of mine that has been sitting around for months…) It is equal parts a warm hearth and a wolf growl. Backed by the expert fingers and almost unfair coolness of guitarist Shu Nakamura, Niamh treated us to Queen’s “Love of my Life,” got us singing with her on “House of the Rising Sun,” and 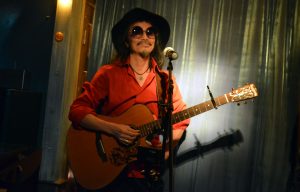 broke every heart with “Wild Mountain Thyme.” She then quickly decided that all the night’s musicians should return to the stage to lead the crowd in an improvised rendition of Bowie’s “Modern Love.” This, I believe, is what is best about Artists Without Walls. Not only is each voice deeply distinct, but it is the way that we all come together and lift one another. Nothing else exists like it.