I was so looking forward to the “L” in the logo, and in every promotion and ad. But in announcing Super Bowl “50” this year, “they” have decided to deep six this whole Roman number thing from here on in, and go Arabic.

Though given the troubles in the Middle East, don’t be surprised to hear someone declare: “When I’m President we won’t be using Arabic numbers, I can tell ya’ that right now.” 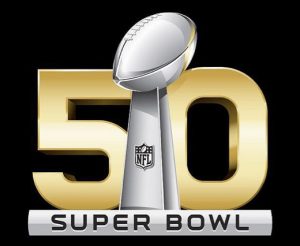 I was so ready to point out that this would be the last time that a single Roman numbered letter would be used to designate a Super Bowl, until “C”! In other words, until 2066. When those of us of a certain age, will certainly be dead. (Don’t you hate when that happens?). And that it has now been 40 years since the last single letter marked still another over-hyped and much anticipated Sunday—“X” (a game played in MCMLXXVI).

With “X” being an unknown factor, it is unsurprising that I have no recollection of that game. But really, by that point I had stopped caring, what with so many more important life events just up ahead. Like Divorce “I” and then just prior to Super Bowl XLV, Divorce “II”.

Of course I remember the first Super Bowl very well. It was trumpeted in all the on-air TV promos, as if the Second Coming. Though hype is not exactly something that hasn’t existed throughout the ages. (“Mary Stuart gets the ax tomorrow. News at XI!”). 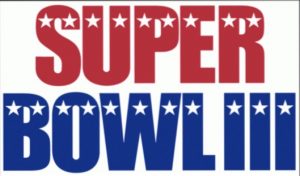 I also remember Super Bowl II, and most especially “III”, when Joe Willie Namath guaranteed that his New York Jets from the upstart American Football League would—and did— defeat the powerhouse Baltimore Colts of the supposed superior National Football League. The Jets were 17 points underdogs that day. That’s a lot of points. Even in Latin. Though I had forgotten how dorky its logo.

The other single letter one, “V,” was the first following the AFL-NFL merger, and it would forever serve as the official league championship game. For the record and for those keeping score, those aforementioned Colts, on a field goal by Jim O’Brien, beat the Miami Dolphins in the final five seconds, 16-13.

While I often lean towards nostalgia and love traditions and rites of passage—I even look forward to my annual flu shot—the loss of those Super Bowl designations, are really no skin off my un-Roman nose. (All my Italian roots aside). The use of Roman numbers in titles, events, sequels, dates and the like, has always struck me as a bit pompous. As if to announce that, “This is really important.” Whereas, in its rather convoluted alternative to Arabic numbers, it suggests just the opposite to me.

MCMLXXXVIII as a date for example— which is about the length of a freight train and looks like something foreboding out of ancient history—is simply 1988; the year that Who Framed Roger Rabbit? was released. That’s why I wryly suggested once, that given the humility of Pope Francis I, he might consider referring to himself as Francis1. Or even better, using lower case…francis1.

You don’t even want to know about a Roman calendar and how it is organized, and its days counted. But if you do, you can reference it in a short piece I once offered on the subject called, Kalends and Nones and Ides Oh My! (March, 2013, Muse-Letter)

To cut to the tackle, the monthly date for this year’s Super Bowl would be expressed via a Roman calendar as “VII Ides.” In English and Arabic…February 7. And as I’ve also said before, (with a license I got down at the DRM; the Department of Repeating Myself), this method of date keeping also suggests still one more reason for the fall of the Roman Empire. (Though not of the Roman Polanski).

As for the game itself? Like so many who will watch—and are not in any betting pool— I’ll have no rooting interest in the participants or the score. Or even the ads really (“been there; done that”). Just pass the chicken wings and let’s raise a Bud (remember the “Bud Bowl?”), to the days of Roman numbers past. Who the “L” needs ‘em!

Ron Vazzano, a writer, poet and actor, has been a frequent contributor to this website as well as performer at Artist Without Walls monthly showcases.