“Oh, my gosh, what a night. The rafters rang.” Cara De Silva 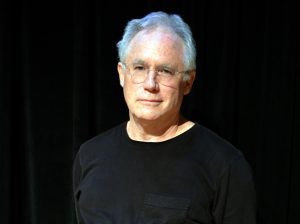 The buzz was palpable as the audience filed into The Cell Theatre last Tuesday for Artists Without Walls’ Holiday Showcase at The Cell Theatre.  First time presenter Jim Phelan opened the night’s proceedings and was met with, silence…a high compliment, at least for writers reading their own work. And silence, lots of it, is what Jim Phelan received while reading his story, “Sketches of China.” Jim’s story was a tale well written and well told of a man dying of cancer, wafting in and out of a morphine fog, remembering a love affair when he lived in China half a century earlier. We hope the character, “Mr. J” lives and Mr. Phelan continues to tell his story. Well done, Jim. 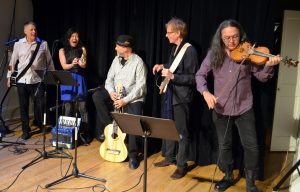 The Artists Without Walls’ Holiday Showcase was also the debut performance of the band Too Many Lauras featuring Peter Chance, guitar, vocals, Cecil Hooker, violin, Susan Hwang, accordion, vocals, Mike Muller, bass and Jagoda on percussion.  The first tune was the premier of “Living in Sin,” which Peter originally wrote as a woman’s response to a bad breakup. Susan’s backing vocals were psycho-samba! Second was “Rita,” the story of a woman who blames all of her life’s struggles on an ice skating accident she experienced as a child.  The band closed with “Burn Me Like a Cross,” the struggles of a young couple in love, against their town that disapproves. The addition of the newest members Susan and Pagoda, who was on an acoustic guitar body, tricked with percussion pieces, rounded out the original trio which appeared at Artists Without Walls’ June Showcase. Of course, Cecil’s beautiful violin and Michael’s bass were evident throughout.  The band will be recording an EP over the next few weeks. 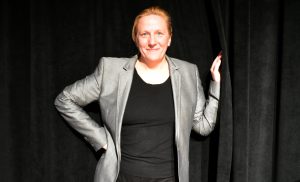 Honor Molloy read from Betty Smith’s classic novel “A Tree Grows in Brooklyn.”  Honor carried the audience back to Christmas Eve, 1912 when Francie and Neeley Nolan brought home the biggest tree in Williamsburg.  Honor, one of the finest readers on the New York literary scene, was brilliant. She perfectly captured the spirit of Smith’s scene, casting her voice in pitch-perfect Brooklynese, tossing our imaginations from one vivid scene to the next. 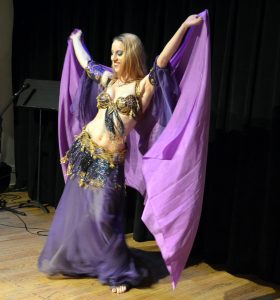 Diversity is a strength and Mary Susan Sinclair-Kuenning has an uncommon diversity of talents including dance, voice and athleticism, which is rarely seen. Additionally,  Mary Susan executes her art forms with a passion that was immediately evident to AWoW’s audience.  Her Oriental dance, accompanied by Mid-Eastern classical music  performed by the Cairo Symphony Orchestra, was both vibrant and artistic.  Her sensual performance, the pulsating music and shimmering costume made her dance a joy to watch. Mary Susan followed her dance with a short film of her work on the Cyr wheel, which  demonstrates her incredible strength and precision.  A wonderful, show-stopping performance. 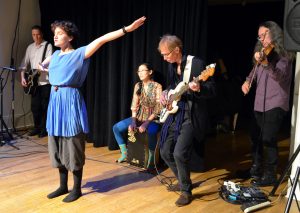 Allison Sylvia read poems from two chapbooks, “Marginalia” and “Scattered Ethos,” which she had been making and leaving in subway cars, parks, on benches, statues over the past two years. She sang a small poem from a journal she has been keeping lately and–collaborating with the talented Cecil Hooker (violin), Peter Chance (guitar) and Amy Yamashiro (cajon)–she danced the first dance of her one woman show, “Girl Rising” to the sounds of “Amazing Grace.” “As always, I’m grateful to have such a supportive as receptive audience as Artists Without Walls to workshop my work in progress,” Allison said.   As always, Allison performed with open hearted eloquence. 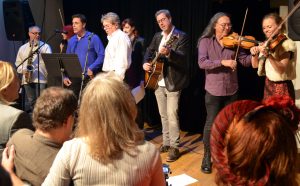 A number of great performers including Artists Without Walls’ Artistic Director Niamh Hyland, saxophonist Erik Lawrence, singer/songwriter Ed Romanoff, fiddlers Annette Homann and Deni Bonet with assisting vocals from Nicholas Garr, Mary Susan Sinclair-Kenning, Charles R. Hale and the entire audience, rounded out one of the most festive holiday endings in memory. Niamh Hyland closed out the evening with a beautiful and stirring rendition of “Have Yourself a Merry Christmas.”

It was a grand night!  The next AWoW Showcase at The Cell Theatre will be on January 25, 2016.

2 thoughts on “POWERFUL, TALENTED and FESTIVE: ARTISTS WITHOUT WALLS' HOLIDAY SHOWCASE at THE CELL THEATRE, 12/22/15”