THE NIGHT THE LIGHTS WENT OUT

As we were about to sit down to an early family dinner of spaghetti and meatballs, the apartment suddenly went dark. “What the…?”

Our first thoughts were to blame it on the faulty maintenance that characterized our tenement building. Then looking out the window and seeing we were not alone, shifting the blame to our faulty neighborhood instead. But upon turning on my trusty transistor radio, we immediately realized that the likes of this (affecting 30 million people), was unprecedented and heretofore unimaginable. (I was yet to experience my first big California earthquake. Nor heretofore, had ever used the word “heretofore.”). Now coming up on its 50th anniversary, I’m talking of course about The Great Northeastern Blackout of 1965. 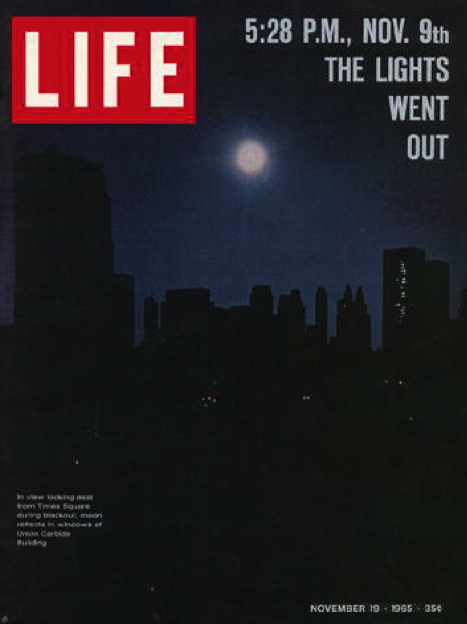 There was some initial concern that this could have been some dastardly deed by Boris Badenov. Were the Soviets about to attack? Not so farfetched, for the world as we knew it seemed to be turning upside down.

Just three autumns prior, the Cuban Missile Crisis brought us as close as the world had ever been to a nuclear war. (Bond & Kennedy: 17 Days in October, OCTOBER, 2012 MUSE-LETTER). And the assassination of JFK, with its cornucopia of conspiracy theories to follow, was only two years behind us and almost to the day. (A Triptych in Remembrance on the Death of JFK, NOVEMBER, 2013 MUSE-LETTER). Context, as always, is everything. If it happened today, who would not first think— terrorists!?

But soon enough it would be attributed to human error; someone asleep at the switch on the Ontario side of Niagara Falls in Canada (“Our Neighbor to the North”). Phew.

Thank God, that neither He (in “an act of God”), nor the Reds were responsible… merely mortal incompetence.

This was said to be “The Good Blackout.” The New York Times reported that:

“Despite the confusion, there were very few cases of rioting, looting or other crimes during the blackout. For the most part, New Yorkers shared flashlights and supplies, and interacted with neighbors.”
A light comedy would be made about this night three years later, starring Doris Day, “Where Were You When the Lights Went Out?” It was a godawful movie. But better, was actually walking the streets on that night under a full moon shining brightly; a scene so surreal as if out of “The Twilight Zone.” 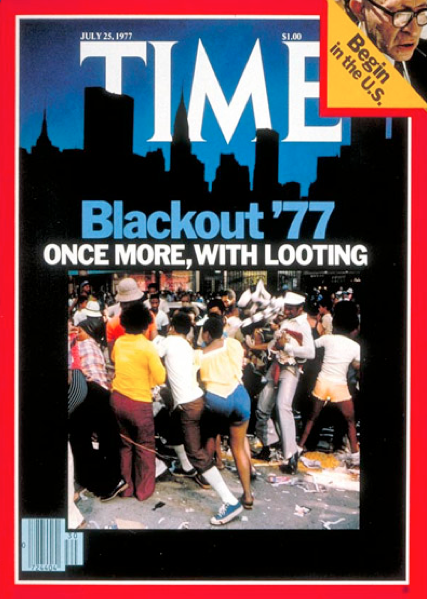 But no harm no foul. And in thirteen hours, electricity would be restored to most of the areas affecting those 30 million across seven states. And as we now understood the cause of it all, surely this was something we could correct. Surely, such a hemorrhage in the infrastructure could never happen again. But of course it did.

A dozen years later in a sweltering summer, the “Summer of Sam,” the summer when the Bronx was burning, came what came to be called the “Bad Blackout.” For the news this time, was about far less than civilized behavior. Albeit commemorative buttons— one of which I still own—noted this dubious event.

And, “Doh!” not again? But yes, in 2003— a blackout even more massive and widespread than that of 1965. (For those keeping score at home, 55 million people impacted this time around. And at 25 hours, lasting almost twice as long.). And again the explanation: stuff happens.

Being left in the dark, literally and figuratively, triggers a sense of vulnerability and fear. And that would especially be the case today in a post 9/11 world, with its increasingly “hackable” technologies. We are no longer safe. “Stuff” doesn’t just happen, it is intended.

In a recent piece in The New York Times, ominously entitled “Infrastructure Armageddon,” there were these chilling bits of news and speculation: 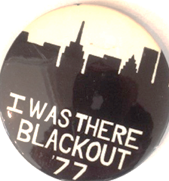 “Over the last four years, foreign hackers have stolen source code and blueprints to the oil and water pipelines and power grid of the United States and have infiltrated the Department of Energy’s network 150 times.”

“…former Defense Secretary Leon Panetta warned in 2012: ‘They could contaminate the water supply in major cities, or shut down the power grid across large parts of the country.’”

“Last year, the Department of Homeland Security announced that it was investigating an attack against 1,000 energy companies across Europe and North America.”

Northeast blackouts will seem like quaint inconveniences in the face of what has been referred to, as these potential “cyber-Pearl Harbor” attacks. Nothing seems too farfetched. It didn’t for a while on that night in ’65, and it most certainly doesn’t fifty years later.

But I’ll not think of these things this November 9th, when I sit down to a spaghetti and meatballs dinner by candlelight, with someone who was entrapped on the subway that night.

Ron Vazzano’s poetry has appeared in several literary publications, and in his published collection, “Shots from a Passing Car,” as well as NPR and the internet. His popular blog “Muse-Letter” (www.domenicapress.com) comprised of his essays, poems and reviews, is now in its 11th year.

As a reader performer of his work, he has been featured at Barnes & Noble and many independent bookstores, festivals, clubs, and now regularly at The Cell in Chelsea, as a member of the performance company Artists Without Walls.