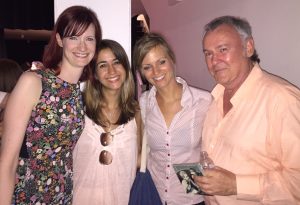 This month’s Artists Without Walls’ Showcase at The Cell Theatre really exemplified our organization’s core values of both diversity and community, bringing a set of fresh, new, young artists amidst seasoned veterans of the AWoW stage. The whole evening was filled with the warmth and the welcoming atmosphere we have come to expect from these gatherings. The Cell itself feels as though it’s growing smaller and more intimate with each passing month, as this family of faces come together to support, sustain, and shine. But the circuit never closes, always making room for more. 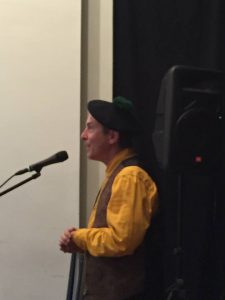 First up, Richard Stillman gave us all a laugh with two musically accompanied story recitations. One, a comical rhyme about a young highland lad named Angus with a prominent honker he puts to use in a bagpipe band; the other, a Peruvian pied piper tale about a young man who uses the forgotten tradition of pan flute playing to rid his mountain town of a scourge of slimy frogs and finds his place among them. Richard, too, has embraced an art form not seen often these days with his oral storytelling and showed us why it is still vivid and necessary. (How on Earth did he make that bubble sound?) 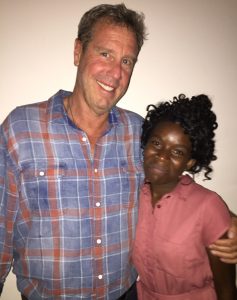 I.S. Jones shimmered with grace and grit reciting three spoken word poems; a gripping piece about racist language; the sensual “Kingdom of Touching”; and a gloriously uplifting ode to those forces in her life which have tried and tested her. I.S. had worried that her work would be “a little risky” for the audience, but we were jolted and moved by the elegant truth in her work. Her calmness and refined manner acts as a prism through which torrents of feeling are focused. Her risk was rewarded and we would welcome her future work. 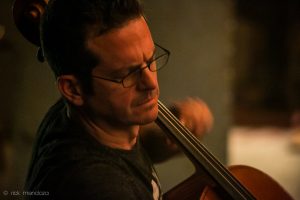 Cellist, pianist, and songwriter Noah Hoffeld demonstrated his incredible range, favoring us with a melodic ballad, a rocking ode to the music that shaped his youth, and an utterly heartrending classically inspired solo to return us to his Juilliard roots. His vocals are reminiscent of Matthew Good, at once tender and rough-edged. It was a roller coaster of feeling to be witness to just a fraction of what he is capable. 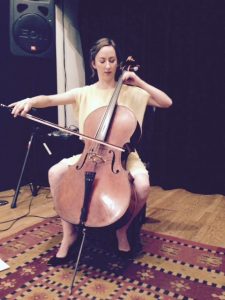 In a happy accident, we were then joined by Eithne Nic An Riogh, just this week transplanted from Ireland. She had reached out to fellow University College Dublin alum Niamh Hyland looking for a cello and we were most fortunate that, instead, she wound up with a slot. Borrowing Noah’s, Eithne treated us to a million dollar smile and two beautiful pieces, a cello standard as well as a deeply moving Irish song about a woman who cannot be buried on the island of her choice. It was heartwarming to see how these fellow performers came together on a spur of the moment to share her talent with us.

Have you ever wondered what would happen if the Sopranos’ Chris Moltisanti was given the psychic powers of John Edwards? Character actor Nicholas Garr has finally given us the answer and it is as hilarious as you would expect. Watching how Nick has altered his body language especially is truly evidence of his gift. He left us in stitches. A pilot should be sent to HBO now that its gangster show niche has a void. 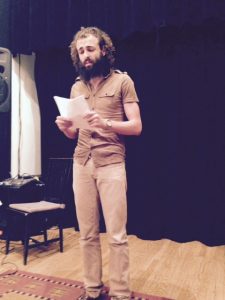 The second poet of the night, Alex Shapiro, was brand new to the AWoW stage, and brought a bouquet of lively, thought provoking, philosophical musings. These poems as quick and sharp as shots of whiskey. Alex inhabited his whole body for his reading, giving off an air of approachability and an enviable talent for memorization. We are lucky to have caught him before he heads out to the Midwest to continue his writer’s journey.

Ed Romanoff is never less than awe inspiring and was a perfect closer for our evening. Ed has performed a great deal with AWoW and is an integral part of its nature, but those who were in the audience last night hearing him for the first time are to be envied. He demonstrated his prowess as a lyricist and his signature sound–steady as a train and sharp like a razor–in three tracks. The first was new, the story of a boxer and his shiftless women. His second choice was a deeply personal gesture for fellow member Connie Roberts, a song called “Orphan King.” Niamh and Noah then joined Ed for his song “Two Yellow Roses,” giving an already breathtaking number a level of depth we as audience members were held in thrall by. It is always an indescribable pleasure when showcase performers come together in impromptu collaborations. This is part of the magic of the space and there is nothing else like it.

We hope that you could be present and that you’ll join us for the next Showcase on August 25th, at The Cell Theatre.