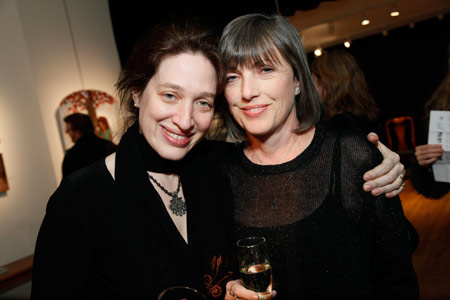 As soon as you walk through the doors of Urban Stages Theatre where Nancy Manocherian’s family drama, HEY JUDE is currently playing through June 21st, you are immediately embraced by another dimension. If you grew up in the suburbs, it’s a familiar place filled with the sort of nostalgia that might remind you of your childhood home. There is a Christmas tree, a large, soft, comfortable sofa, the quiet mumblings of a television, even dad is there, fast asleep and snoring in his plush pajama pants. This stage picture is a sweet memory until the play begins. Dad doesn’t wake up and mom rushes into the picture, nervously tackling a large cardboard box and channeling her alter-personality.

HEY JUDE is rife with tension. Anna’s troubled. Henry, Anna’s husband is despondent and passive. Jude, Anna and Henry’s son is on the edge of adulthood, questioning his identity and seeking to draw closer to the truth – his truth. Jude is adopted. He’s a young man, eager to discover himself and understand more about his roots but it’s bad timing. Anna has slipped into some sort of delusional reality colored by Beatles songs and disturbing machinations which was possibly prompted by a religious conversion, which may have been prompted by regrets about her past. Henry doesn’t care and his health and mind are slipping as well. Jude is left to his own devices, trapped in a world that should be safe but is instead completely unhinged. Christmas cheer cannot bring joy to their story. The only way out is to acknowledge the truth but no one in this play is able to.

Director, Kira Simring and her production team – set designer, Peiyi Wong, lighting designer,  Gertjan Houben and M. Florian Staab on sound, have crafted an environment that match Anna’s state of mind – a place as surreal as it is hyper-realistic. This clash is both disturbing and oddly comforting. Both the production design and performances (particularly Adam Weppler in his tragic portrayal as Jude and Larry Cahn as Henry) come together to expertly portray the reality of family dysfunction. Behind the walls of a broken home, you have two choices. You either fight the pain or you disengage from it altogether. While HEY JUDE is difficult to witness, it’s only because of its stunning accuracy. I applaud playwright, Nancy Manocherian’s bravery for transporting us there.