“I’ve been working as an actor for at least twenty five years now and I’ve never before been involved in anything quite like this. AWoW is a unique blessing. So happy to be a member.” Jack O’Connell, actor

“What a night…a jam packed evening of talent journeying from a Greek isle lutist, to an Ex ‘Mad Men’ like poet, to B-Boy Melding Irish Hoofers.”  John Munnelly, singer/songwriter

Hammerstep co-founders Jason Oremus and Garrett Coleman, who have performed at Lincoln Center and the Palace Theatre in London, brought their incredible dance act to  AWoW’s May showcase. (Rather than speak about it, check out the short video below.) As a company that strives to embrace traditional elements of culturally rebellious dance forms, while breaking down barriers to how they may be integrated and presented to the public, Hammerstep felt right at home alongside AWoW’s other genre-bending artists who like to think outside the box. “AWoW is a uniquely communal place for artists to celebrate and share in that common goal, and Hammerstep looks forward to having AWoW supporters at its premier run of the company’s NYC-based immersive theater experience INDIGO GREY, next Spring,” said Garrett. For updates on the company’s work, check out Hammerstep on Facebook or at their website by clicking here 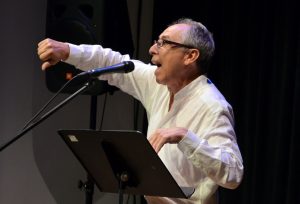 Ron Vazzano offered a quartet of poems that played thematically with a couple of current pop culture events: the concluding of the Mad Men series—as Ron once toiled at an ad agency on Madison Avenue in the late 60’s —and horse racing, which is in the midst of its “Triple Crown” season. He ended with a “sendup poem” about our esteemed group (“…a gathering that called itself “Artists Without Walls”/Though they performed in a space called The Cell”) that was both hilarious and poignant, and enthusiastically received by an audience of fellow artists.

Maritri  Garrett performed one of her hits from the album Soulfolk Experience volume one, “No Regrets,” an anthem for living life to the fullest. She followed that up with a compelling cover of “Royal” by Lorde, which takes on a whole different meaning when taken out of the teen demographic for which it was intended and sung by a mature artist. Maritri finished off her set with Police’s popular tune “Message in a Bottle,” by the Police, which had the audience singing along.  This extremely talented women moves from the guitar to the piano to cello–all with a her beautiful voice–with shocking ease. And she’s a delight as well. 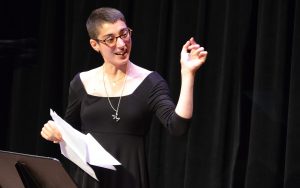 Liv Mammone is a poet who attacks life with a strange combination of joy and rage; humor and pathos. Improvising jokes to set the audience after an accidental fall, she then led them deep into her experience as a disabled woman in a variety of ways–a blues song about her chronic pain; a gripping letter to her grandmother about the death of her friend; a loose litany of images from the morning prior to an operation closed out with an encore of “Vagina Resigning” to lift us back up. With honesty and freshness of image, she shows us the universality of the body’s breakdown and how we rise above those changes. 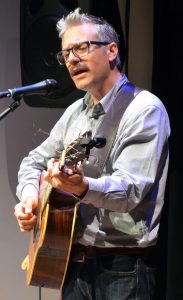 John Munnelly compacted the life, times and death of Julius Caesar into a witty three verses and a very catchy sing-along refrain.   John is as creative and as strong a writer as his award winning stripes attest to. He sang a paean to love while addressing the escapist daydreams we all have, finally realizing he would be ‘Nowhere without You’.   For the final geography  lesson John took us to the world’s most hipster borough in his song ‘Brooklyn’ for a gentle dig at the local hood sighing and singing though the eyes of a wide eyed newbie who ‘knew she’d like it here’ – now she’s living in Brooklyn. This one had the crowd laughing and singing along. 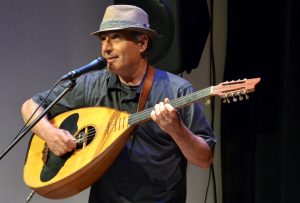 In the true spirit of multiculturalism, Dennis Demakos, who has been playing traditional Greek music and singing the tradtional folk music of dozens of countries from Europe, Asia, and the Middle and Near East for many years, began his performance with a traditional from the island of Karpathos-Gori To Maksellari Sou, My Lass, Your Pillow- a common themed tune in which a young woman usually gives an embroidered handkerchief to a young lad as a token of her affection. The second tune is a traditional from the island of Kassos-To Pathos, Passion- and is another common themed tune about the heartbreak of living in foreign lands away from one’s Mother and homeland. Beautiful and evocative.

The next Artists Without Walls’ Showcase will be at The Cell Theatre on Tuesday, June 23, 6:45pm. For more info on the group please contact info@artistswithoutwalls.com