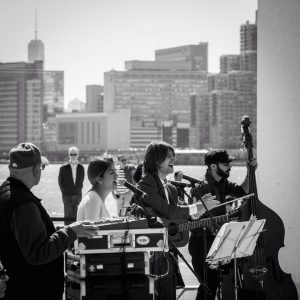 Sasha Papernik and her band on Roosevelt Island in NYC

Two Artists Without Walls’ members, Sasha Papernik and Amanda Thorpe, will be be performing free shows at Rockwood Music Hall this week.  Sasha will be performing at Rockwood tomorrow, Sunday, May 3rd, at 6pm with two original bandmates: Kyle Saulnier on bass and Justin Poindexter on guitar. You can join Sasha for an evening of Russian dances and original songs.

In other news, Sasha is very excited to share that her arrangement of the Russian Folk Song “Vo Pole Bereza Stoyala” (In the Field Stood a Birch Tree) has been licensed to Carnegie Hall’s Link Up program and will be orchestrated and played by orchestras across the country! She will be performing the song live at Rockwood.

On Thursday night, May 7th, 7pm, Amanda Thorpe, AWOW’s member abroad, will be back in NYC and performing Bewitching Me: The Lyrics of Yip Harburg. Harburg, born and raised on the Lower East Side, is the oft unknown wordsmith of some of the most popular songs in America.  Two of Harburg’s most famous lyrics form brackets around the 1930s: “Brother, Can You Spare a Dime?” written for the musical Americana, told from the point of view of a WWI vet who’s standing in a breadline, wondering where his slice of the American dream is, and “Over The Rainbow,” sung by a girl clutching her dog, gazing into the heavens, wishing she could get the hell out of Kansas.

Amanda’s CD, Bewitching Me: The Lyrics of Yip Harburg has received wonderful reviews. Here’s what Tom Semioli,writing for the Huffington Post, said of Amanda’s singing. “Amanda’s organic rendition of “Somewhere Over the Rainbow” turns subtly anthemic upon the arrival of the chorus…and (guitarist) Scherr’s exquisite solo on “Adrift on a Star” deeply echoes Thorpe’s seductive pathos.”

Amanda is looking forward to returning to New York City from Paris to perform these and other Harburg tunes at Rockwood.

Rockwood Music Hall is located in Manhattan at 196 Allen Street.