“As a first time visitor … I really enjoyed everything about the evening. Talented performers, friendly people, time to mingle … fantastic. I will be back for certain.”  Clyde Berger 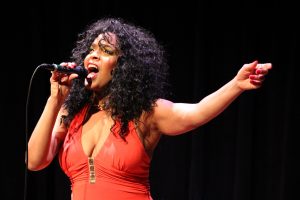 Sybil Scoby, portraying Donna Summer, took us all down memory lane, reminding us of how great it was to watch and listen to Donna’s disco.  For many, Sybil’s renditions of Donna’s songs reignited memories of an era gone by.  A feel good musical experience to begin the evening. 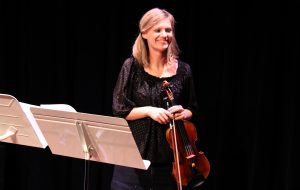 Violinist Annette Homann returned to her classical roots with a performance of the 1st movement of Serge Prokofiev’s Violin Sonata, crafting a performance of  technical skill and passion.  Switching gears, Annette held the audience rapt with virtuosic fiddling during her second piece, Caprice No. 2 by Mark O’Connor. 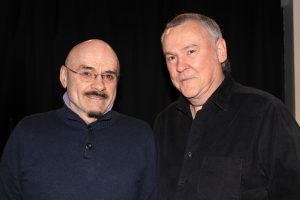 Noel Lawlor followed with a superb rendition of the “Muse Of Fire” speech from Shakespeare’s Henry V. In this scence, Shakespeare asks his audience for their willing suspension of disbelief, to come along with him on an epic journey on land and sea using only their imaginations as he depicts vast battle scenes over a period of time during the 100 year war between England and France, with just a few actors on a bare stage.  Spellbinding performance from Noel. 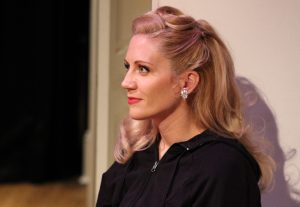 Melissa Ritz brought “glitz” to Artists Without Walls Showcase. Melissa  impressed with a skillful assortment of singing, tap dancing and character work from her award-winning one-woman show, Journey of a Bombshell: The Ina Ray Hutton Story. Melissa’s show makes its west coast debut in March in Las Vegas, where audiences are sure to be charmed by her talents.

Award-winning actress and comedian Nancy Redman was described as brilliant, hilarious, and hysterically funny in the her preview of her sci-fi comedy, The Doctor Is Not In , exploring the hypocrisy of Hippocrates. She demonstrated perfect comedic timing in her performance, which is directed by Austin Pendleton.  Nancy can be seen in a benefit performance of the play at the Dorothy Strelsin Theatre, Abingdon Theatre Company, 312 W. 36th Street, NYC on Sunday, March 15, 2015 at 7pm.  Ticktes are $20.  Use Code DOC315 for a $15 ticket 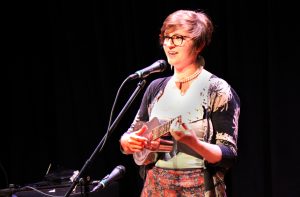 Amy Virginia Buchanan’s lilting tunes tricked us–seeming simple and sweet–but then tugged on our coldest, furthest heart strings. She has a gentle, chatty voice that floats above a steel ukulele, and weaves stories about whales and birds and boats and other such things. She sings about loneliness and love, clearly knowing the pain of it, but also remaining optimistic and hopeful. Her joy on stage is palpable, and by the end we were all pleased to have the chance to sing along.

Niamh Hyland brought her rock band Lily Sparks to Monday’s Showcase and although they kept it acoustic, the band absolutely rocked the crowd with their original tunes. Niamh’s voice revealed surprising new dimensions to those familiar only with her traditional and acapella singing talents. Their passionate final song, “Ressurection,” gave the audience at taste of what’s to come in their full electric show at Arlene’s Grocery on Friday, March 6th, 7pm. Not to be missed!