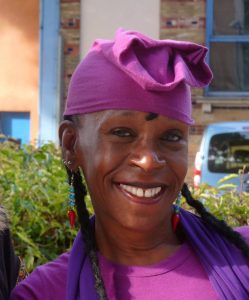 Here are a few journal entries written shortly before she left:

Very sad to update my status here in Cambodia. The Tom Dy Center, a place that was filled with many staffers last year now has only four. The offices looked like people ran from their desks mid-day in a rush to escape something. I noticed that there were new guards outside. I assumed they were hired to keep the place from being robbed. 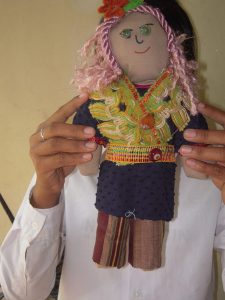 Crafts made in Cambodia

The Center was a ghost town. Eight girls this year, last year 121.  They were still in their street clothing, hair tangled, and uncombed. There was a far away look in their eyes and tremendous distrust of any staff including me. I laid out the supplies, was introduced and began working with them. They were slow in the beginning, but I knew once we started the laughter would start. But it never did.The girls worked in silence.

Cambodia has been hard this time. Tom Dy, my favorite shelter, closed the next day.

I saw Somaly Mam, today for the first time. I saw her before she saw me. She was very thin. When she saw me, her eyes lit up and she ran to me. She held me by the hand and whispered, ” Sana, I am not perfect, I have made mistakes, human mistakes, not all they say is accurate. But now, I care less what people think of me, but what about the girls?”  Somaly Mam continued, “I am a volunteer in my organization now. I work here eighteen hours a day. I will rebuild this foundation and then I will disappear with retirement. I am tired and my youngest child has never had a mother in me. I am not perfect. Time will tell.”  She then said “Thank you for loving my girls Sana” 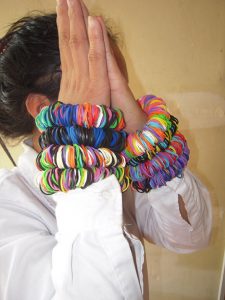 She will no longer run shelters she said but instead will do outreach from the brothels in Cambodia.

I said bye and I left. I shouted back as I drove off on my motorbike, “You brought them back to life, Somaly, you did it and you will do it again.”

I returned today from the Lighthouse Orphanage, where Shey Nich lives, the young girl I met 7 years ago. She was taken to the orphanage at 6 years of age by her uncle and has grown up there. She is now 17.  She told me that she cried for three days straight when she arrived. She missed her mother and family that lived in the countryside, but they could not feed her and saved her life by placing her in the orphanage. She says now ” Lighthouse is my home and I love it, Sana. “

On the way home, I was counting my funds trying to figure out what to pay the driver, Mr. Ton. He is a gentle young man that has taken me everywhere I needed to go these past 6 years. I was being careful counting and holding on, when $10 blew out of my hand. My head rotated about-face, but my eyes never lost contact with the $10 blowing behind me.

Somehow I found the Khmer word for stop, “Chop, chop!!” and must have screamed it as he stopped so suddenly that I almost flew forward. I never took my eyes off the money. Before he could turn around, I jumped off the motorbike and made a speeding dash for the money.

Mr. Ton stood frozen and watched me run down the road. “I got it!” I yelled.  I ran back to Mr. Ton. I pushed it into his hands with an additional $5 and said to him “Thank you for the day.” He looked traumatized. I wondered what he thought of this crazy women running down the highway after a few dollars. He probably would have done the same.

The average salary for a Cambodian policeman is $2 per day. This money was five days of salary rolling down the street. For me, it’s three days of eating simple food, or it’s one week of water. It’s dear to all of us.

Sana returned from Cambodia on on Tuesday, January, 27th at 10:30 pm. She taught at 9 am in NJ the next day and Hunter College in NYC–her 20th year–that same night. The following day she taught at John Jay College in NYC.