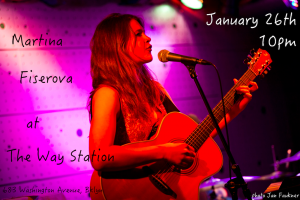 Martina Fiserova, a singer songwriter originally from Prague, will perform her original songs on Monday January 26th at 10pm at The Way Station, 683 Washington Avenue, Brooklyn, no cover charge. 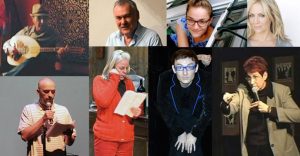 CANCELED DUE TO THE BLIZZARD

Moonlight Sonata, written by Brona Crehan and starring Grainne Duddy, made it to the finals at Manhattan Rep’s winter one act competition. Thirty plays participated and six move on to the finals on January 29 and 30 at 6.30pm and 9.00pm each night.

The Manhattan Repertory Theatre is located at 303 W42nd St, NYC. Reservations can be made at: mrtreserve@gmail.com

Join them for the next session of their traditional Brooklyn Cajun Jam Session at the fabulous Jalopy Theatre in Brooklyn. This jam will be led by Jesse Lége.

The Brooklyn Cajun Jam focuses on the traditional Cajun & Creole music of southwest Louisiana. Vocals are sung in Cajun French and are backed up by button accordion, fiddle, guitar, and occasionally, ‘tit fer (triangle) bass and mandolin. Since most tunes are played in the keys of C and G, fiddles are usually tuned down a whole step to FCGD. Bring your instruments, join the music session, dance, or just come by and listen to some great traditional Cajun music.