In the aftermath of the terrorist bloodbath in Paris at the offices of the satirical magazine Charlie Hebdo, reportedly three million people took to the streets in solidarity, many holding up signs proclaiming “Je suis Charlie.” In translation, it might read something along the lines of…

“Though we were not even aware of the existence of this magazine…or, while we were aware of it and even thought it crude at times in its lampooning of religious beliefs and institutions, we are at one with Charlie in the right to freedom of expression without being murdered for it.”

When CBS’s Sunday Morning program asked the Editor-in-chief of MAD magazine, John Ficcara, for a commentary on this tragedy, he admitted to giving pause. He had a couple of concerns not the least of which was, that by appearing on TV denouncing terrorists and defending the rights of satirists and cartoonists, would he be endangering his own life and that of his colleagues?

He went ahead all the same and noted in his two and a half minute statement, something so obvious that we’ve always taken for granted. Yet in the lunacy of a terrorist world, it is newly appreciated and even profound in its assumption. He said in part:

“…we were merciless on the Catholic Church for covering up the child abuse scandal. And after 9/11, we went after Jerry Falwell hard for blaming the 9/11 attacks on gay feminists, abortionists and the ACLU.

We knew at the end of the day, no matter how much we lampooned Falwell or the Catholic Church, we shared a common set of rules of engagement.

The worst that could happen to us was that we got a stern letter from their lawyers—we live for those. Not once did we ever fear for our safety.”

Actually, from what I’ve heard about Charlie Hebdo, I would not have associated it in any way with MAD magazine. As a piece in The New Yorker noted, “they (Charlie) worked in a peculiarly French and savage tradition, forged in a long nineteenth-century guerilla war between republicans and the church and the monarchy.” Hardly the raison d’être for MAD. Yet former Chicago Seven defendant and later California state senator Tom Hayden has been quoted as saying, “My own radical journey began with MAD magazine.”

Having been a reader of MAD over forty years ago, I loved the great caricatures of the people it was spoofing in the pop culture, its sendups of ad campaigns, its regular features of “Spy vs. Spy,” “The Lighter Side of…” Don Martin cartoons and the Fold-in, and the like. I didn’t remember it being particularly controversial or scathing on any great political or social issues. Yet a quick Google scan of some covers over the years that jumped out at me, suggests that it has taken on the establishment and those things we hold dear. Sacrebleu, even Facebook. 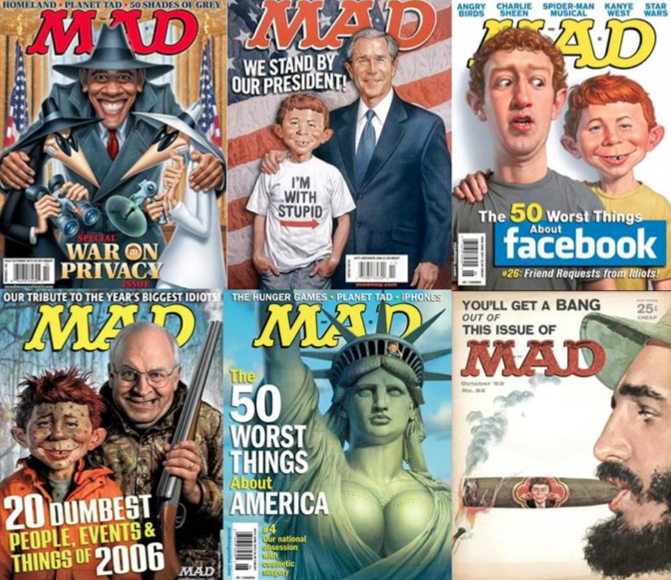 The Fidel Castro cover from 1963 is particularly ironic, in that it has since been alleged, that one of the methods the CIA was considering in assassinating him, was with an exploding cigar. “Out-spying” even “Spy vs. Spy”?

From there it was but a short walk to a Barnes & Noble to pick up the current copy, to see if my remembrance of the magazine (comic book?) as being something merely mischievous, had developed into something more satirically venomous in my long absence. In two words…not really.

In its annual tribute to the year’s biggest idiots issue, “The 20 Dumbest People, Events and Things 2014,” it roasted some of the more low moments in the news of the past year. These included jabs at the “NFL’s Domestic Violence Problem,” “Ebola Hysteria,” the “Militarization of the Police Department” (though nothing on Ferguson) “Obama Caught Off Guard” (“Fail to the chief.”), “Hillary Clinton Crying Poverty,” “Chris Christie’s Traffic Scandal,” “Putin Invading the Ukraine,” “White House Security Breaches.” It also featured in a cartoon spread, “A MAD look at the Old Testament,” in which for example, the pharaoh’s daughter upon finding Moses in a basket, leaves him on the Nile river bank and just takes the basket. Not the sort of stuff that is going to result in a massacre of their staff by outraged fundamentalists. It will be interesting to see if MAD addresses Charlie Hedbo, even obliquely, in their next issue.

To be Charlie means going over the top and never having to say you’re sorry. It means believing in a right to freedom of expression that doesn’t cause an endangerment to people, as say yelling “Fire!” in a crowded theater would. The only danger here being to themselves. And they knew it, as their office had been fire bombed before. And that takes guts. Or some might say stupidity. But in that sense, Je ne suis pas Charlie. Je suis MAD. And I suspect most of us are.

Ron Vazzano, a writer, poet and actor, has been a frequent contributor to this website as well as performer at Artist Without Walls monthly showcases.