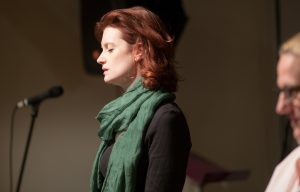 “What a great night of talent…and Niamh Hyland’s voice is stunning. I literally get goosebumps. Amazing. ” Mitch Traphagen

Joseph Goodrich started things off with “The New Boy”—a poignant and humorous look at Christmas in a small Minnesota town. Goodrich’s story skillfully conveyed the turbulent emotions of its main character, a seven-year-old boy whose life has been touched with loss. Sensitive writing and a bravura performance by Goodrich made “The New Boy” a welcome guest. 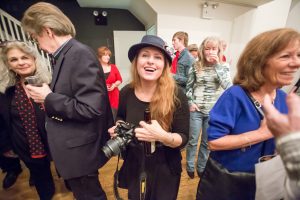 Ron Vazzano’s poem “Trains: A Christmas Story,” suggested paradoxically, the joy and peril of getting what you wish for, in that it can come at a cost of a loss of innocence and humiliation in the process.  Beautifully done.

Things Never Change,” the title track from Michaels Christmas CD, touched the audience’s heart with it’s loving sentiment for Mom and Dad as they physically change over the years. Michael finished his set, appropriately ringing in the New Year, with “Year Out…Year In.”  You can hear all the above mentioned songs on Michael’s latest  Christmas CD Some Things Never Change.

Here’s what the audience had to say about playwright Brona Crehan and actress Grainne Duddy:

“Moonlight Sonata – a roller coaster of a ride. “

“We felt like we were eavesdropping on something deeply personal and could have listened all night.”

Singer/songwriter Ed Romanoff began his performance sharing the ironic discovery of his own Irish heritage and being welcomed to Ireland by Phillip King on the RTE program, “Where The South Wind Blows.”  Ed then continued his engaging rootsy storytelling with an Irish twist by becoming the voice of Willie Sutton in a ballad about the famed Irish bank robber, paroled on Christmas Eve by Governor Rockefeller.  Ed also played a crowd pleasing new song, “A Golden Crown,” about a boxer and a claddagh ring.

Nicholas Garr gave a wonderfully moving, and hysterically funny performance, from his solo theatre piece Paper Tigers, which explores our shared issues of love, sex, ambition, and self image, in a world where things are often not as they appear. In the scene Nick performed, Father Rodney, a teacher at an all boys Catholic school, gives his final religion class, to a group of graduating seniors.  In Nicholas’ Paper Tigers, a Mafia psychic, channels a variety of characters from the underbelly of the familar, in order to help his audience find “spiritual understanding and their true inner selves.” 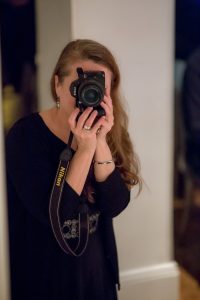 What if 19th century Paris’ most infamous party-girl were undead and on the loose in the Big Apple? Marion Stein read from her new novel Blood Diva (published under the pen name VM Gautier) which reimagines the heroine of Camille and La Traviata as a vampire-about-town enjoying the human smorgasbord that is New York.  Blood Diva is available in paper book and as an ebook at Amazon and other fine booksellers.  Click here for a link to the Blood Diva blog. 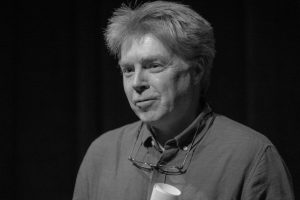 Honor Molloy and Niamh Hyland brought the evening to a close with “Christmas on an Island.” Adapted from a Radio Eireann script written by Honor’s mother Yvonne Voight, this selection from Smarty Girl – Dublin Savage is set in the wilds of Inish Maan during the last days of 1954. Honor played the mother and the mischievous Noleen O’Feeney. Niamh played a handful of Island Women, including the Mighty Spirit, Bridgie Flaherty. There was a song—miracle a song–as Niamh sang the first verse of “Silent Night” in Irish. Then the whole crowd joined in to celebrate the season and send each other home (with a quick stop at the Westside Tavern first.)

The next Artists Without Walls’ Showcase is on January 27th, 7pm at The Cell Theatre, 338 W23rd St., NYC

All photos by Vera Hoar and Mitch Traphagen.