“The atmosphere is electric; it encourages creativity, imagination, and very importantly, friendship and discussion between like minds amongst the audience and the performers. Everybody is welcome at Artist’s Without Walls.” Eimear O’Connor, Ireland, author, Sean Keating: Art, Politics and Building the Irish Nation. 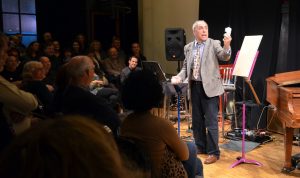 Ron Vazzano performed a monologue entitled “Ten Totems of Obsolescence in Passing,” adapted from an essay he had posted online in his monthly “Muse-Letter.” This stunning piece, that ran the full gamut of emotions— from pathos to joy— captivated the audience.  A highlight, was his bemoaning the fact that the 100 Watt bulb had now been replaced by a new squiggly fluorescent one, which he suddenly produced from his jacket pocket with an existential bewailing:  “A light bulb that will outlive me!” 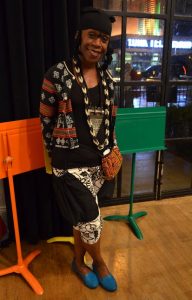 Ceramic artist Sana Musasama began her compelling performance, which included a filmed photo-journey of her art and travels, stating that as a world traveler she seeks out the comfort and protection of women in traditional cultures. She visits markets that are dominated by women who invite her into their lives, guide her and teach her; they feed her passion.  Describing her mission, Sana said, “Heart first…you touch lives and you are touched by life.” A riveting presentation. 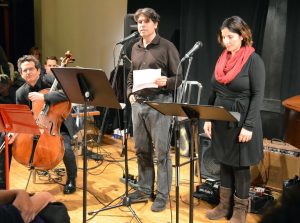 Liz Queler and Laurie Lewis, were joined by musicians Mike Visceglia, Seth Farber and Robin Daniels in a piece written expressively for their AWoW performance called “The Owl and the Pussycat. Here are few of the audience’s comments:

“Everything about it was perfection—the contrast between the nursery rhyme and your narrative, the beauty of the underlying melody, Robin’s eerie percussive touches, it all coalesced into an incredibly moving and emotive piece of art.”

“Wow.  That was wonderful.  It came together beautifully and moved me to shiny tears.  I expected the piece to be poignant, but the joy and hope came from the performance.”

“I just loved the piece – as lulling as a lullaby but oh so subtly becomes an adult odyssey, daydream, night mare….” 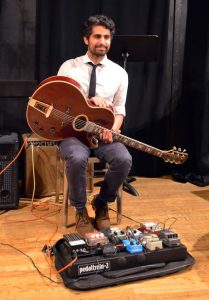 Israeli born Jazz guitarist Idan Morin said, “My playing is based off of jazz, but is influenced by rock, classical and world music. The music that I write tends to be very melodic, cinematic at times.” Idan began his set playing an improvised intro to an old jazz standard called “My Ideal,” followed by the actual tune. He followed with two originals, the first called “Mental Comp” and the second “Movement.” Idan is clearly staking out his own territory with his technical brilliance and melodic sound.

Richard Deane read a scene from his novel in progress “When Yesterday Comes.” In this scene Richard invites us into the private retrospection of a young woman reflecting upon the psychological abandonment and abuse that haunted her childhood. Elle Hatcher’s survival comes at the cost of her innocence and portends consequences that will affect not only her own life but those of her younger sisters. Richard’s words evoke a universal poignancy meant to scratch below the surface of our sympathetic responses to life’s tragic disappointments.

Warren Malone and his son Gibson lit up the theatre with three inspired tunes. Warren began with one of his own works, a soulful tune called “Ash and Smoke,” then was joined by his son Gibson on piano for “Good Golly Miss Molly” and “Mean Woman Blues.” Have a listen below.

Artists Without Walls next Showcase will be at The Cell Theatre on November 25th. For more information contact info@artistswithoutwalls.com