“I wanted to thank you so very, very much for having me perform at your showcase. I had a wonderful time meeting everyone and I must say, I’m beyond elated to know that your organization and showcase exists. It’s such a pleasure to see live music and art alive and well in New York — and being so well received in such a right, proper venue. As a touring artist in the pop world (although I come from a classical concert background), I experience all different sorts of venues on a regular basis, but by far, the showcase at the Cell, totally took the cake! So thank you!”  Emiko 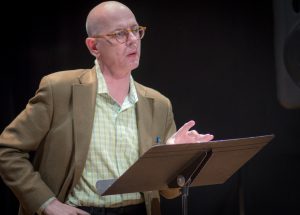 Joseph Goodrich opened the evening with a powerful reading from S. N. Behrman’s The Worcester Account. He captured all the finely-shaded emotions of Behrman’s prose and brought to vivid life the story of a boy’s intimations of mortality. 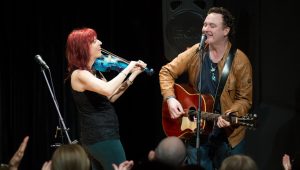 Fiery redhead Deni Bonet was joined by her full band of Steve Murphy on guitar, Bruno Esrubilsky on cajon, and Emiko on keyboard. Deni premiered two very exciting songs from her upcoming instrumental CD, which the audience adored. Then she sang an energetic cover of the Cameo hit “Word Up.” She wrapped up her showcase joined onstage by multi-platinum Irish recording star Mundy (who had popped in for a visit) on his international hit “Galway Girl.” A brilliant, lively segue into the intermission.

Playwright/performer, Erin Layton performed a riveting scene from her award winning, multi-character one woman play, MAGDALEN, portraying the most extreme pairing of her eight characters – a severe nun and a loud prostitute. Erin transitioned between her characters with such ease that is was almost like witnessing two separate actors onstage.

Ashley Bell wowed everyone once again with a beautiful performance of a rarely heard version of  “Ave Maria” written by the 16th century Italian composer Caccini. Ashley shifted to musical theatre  and provided a thrilling rendition of “How Could I ever Know?” from the Secret Garden.

Artists Without Walls next Showcase will be on Wednesday, Oct 22nd, 7pm, at The Cell Theatre, 338 W23rd St.