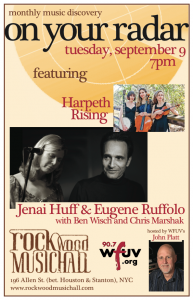 Singer/songwriter Jenai Huff will be performing with Eugene Ruffolo, Ben Wisch and Chris Marshak today, Sunday (9/7) on NYC’s WFUV.  Tune in and listen to their interview with host John Platt on his Sunday Breakfast Show; they will be performing 4 songs as well. John’s show airs from 8-11am, 90.7fm on your dial in the NYC metropolitan area or streaming at WFUV.  They will likely be on sometime between 9-10:30am EST.

Tuesday they will be performing an hour set during the “On Your Radar” concert series at Rockwood Music Hall, 196 Allen St., NYC, which is hosted by WFUV. The show starts at 7pm but you will want to get there early to get a seat. The doors open at 6:30pm. Also performing that night is a wonderful trio from Nashville, TN called Harpeth Rising .

Actor Jack O’Connell plays Uncle Richard, a tile store owner on Coney Island Ave, in the  film The Quitter, which opens for a one week preview at Regal Cinemas, 247 W 42nd St, NYC on Friday September 12th. There are five screenings per day for one week. This great little gem of an Indie was filmed mostly in Brooklyn and directed by Brooklyn native Matt Bonifacio.

Singer/songwriter Martina Fiserova will perform a solo set of her originals at the Way Station, located at, 683 Washington Ave (Btw Prospect and St Marks), Prospect Heights, Brooklyn 11238, on Wednesday Sept 10th at 8pm. No cover.