Who is Renata Hinrichs? 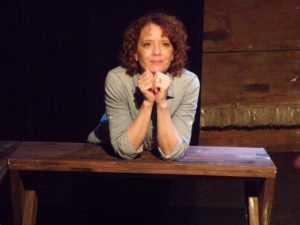 I am a Midwestern girl.   I was born in Dubuque, Iowa and moved five times before I was 12 years old, ending up in Minneapolis, Minnesota. I am the daughter of a Lutheran minister, and growing up in the church watching Dad preach every Sunday was like going to the theater every week.

My first acting lesson came from Dad when I was asked to read a lesson from the Bible for a Youth Service at age 12 or 13. He said breathe, understand what you are saying, follow the punctuation, say it like you are really talking to someone and remember to look up. I was painfully shy and hated speaking in public, but when he gave me tangible things to do, I did it without crumbling in terror.   I was always most comfortable dancing. I can’t remember when I didn’t dance.

Mom must have noticed me dancing in the living room or in the backyard as a child. Of course I thought my cloak of invisibility made that impossible, but she saw me and took me to my first ballet when I was seven. It was THE NUTCRACKER at the McCormick Place Theater in Chicago. I was totally enthralled. I saw other children dancing for the first time and afterwards she said, “Would you like to learn how to do that?” And I said, “You mean they learn how to do that? You don’t just do it?” Thus began my journey with dance. 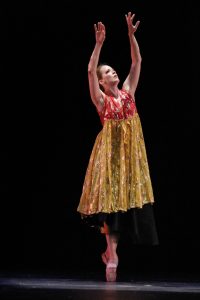 My first teachers were Russian, and the way they taught dance was another form of an early acting lesson. They first focused on technique, placement, and precision, but they also emphasized musicality and the character of the movement. They taught us to think of movement and music as phrases of speech. What is your intention? What do you want to communicate with this movement through this music?

When I arrived in New York after high school to pursue my dream of being a dancer, I got a scholarship with the Harkness Ballet School but, I found the ballet world to be very restrictive. I longed to be more creative than being one of 25 other girls in the corps de ballet, so I started exploring modern dance. Paul Taylor, Martha Graham, Jose Limon, Eric Hawkins, Phyllis Lamhut and May O’Donnell. Then I saw the first performance of Pina Bausch’s company in the United States at BAM.   Her production of THE RITE OF SPRING changed my life. That piece completely transformed my perception of what dance and theater could be.

Around that time I met Annie B Parsons, a young dancer and choreographer at Columbia University. She used me in much of her early work. We continued to work together for the next 15 years. Then she and Paul Lazar started BIG DANCE THEATER.   I am proud to be one of the founding members. That was the perfect way for me to explore my love of dance and theater. Working with Annie B Parsons and Paul Lazar has been a major influence on my work.

I am working on a solo play called RANDOM ACTS an autobiographical piece about some of the events and circumstances that shaped who I am as a person and an artist. It is the first of a trilogy I am developing. 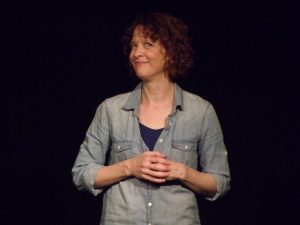 I was living in downtown Manhattan during the events of 9/11, and that experience unearthed some of my earliest childhood memories. One incident that happened on the way to school when I was 5 on the South Side of Chicago was the spark of the piece and everything followed after that.   I have had a lot of support and encouragement from Lee Brock and Seth Barrish from the Barrow Group. Lee was the first person to suggest I develop a one- person play based on my experiences. I first performed it in a Solo Flights Festival for FAB Women of the Barrow Group and then as part of the Emerging Artists Theater New Work Festival.

I am performing RANDOM ACTS, which is directed by Camille Saviola, in the United Solo Theater Festival at Theater Row, 410 W. 42nd St.

The show is playing, October 12th at 2pm and on October, 18th at 6 pm.   I have sold out the October 12th date, but tickets are still available for October 18th. If I sell out that date, they will give me another date. That would be nice, but we’ll see. Tickets can be purchased through Telecharge.

Who are the actors/writers/playwrights past and present that you admire?

I am most inspired by random acts of kindness. Any time someone goes out of their way to help someone whether it’s holding a door open or in the case of my friend, Stephen, holding a woman’s head after a train crash, when he was also injured, until help arrived and in so doing saved her life. That inspires me. 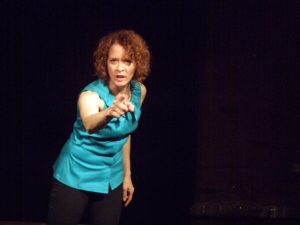 The person who most inspires me is my mentor, Greta Schreyer Loebl. She passed away several years ago, but there is not a day that goes by that I don’t think of her. She escaped the Nazis from Vienna in 1938 at age 18.  She arrived in New York unable to speak a word of English and became a jewelry maker, fashion designer, painter and poet. We met through a mutual friend when I was writing my first solo show about a Dutch woman who died in Auschwitz in 1943.   She thought I might learn something from her. Well, I started out as her model, then I became her assistant, and in the process, she became a dear friend and a grandmother I never had.

Greta created in some way every day. Her life was a work of art, whether painting or drawing or writing, planting flowers or making a beautiful meal for friends and sharing her amazing life stories. She was always curious and engaged. She never became famous and didn’t sell as many paintings as she wanted, but she did her work, practiced her art. She was true to herself and brought joy to the world.   She encouraged me to create and trust my own voice and vision and for that, I am most grateful.

Name 3-5 things you want to accomplish in the next 5 years.

Finish the trilogy as part of the New Harmony Theater program and/or in The Sundance Theatre Lab and see them fully produced. Write a multi-character play. Develop a TV show. Continue to act in theater and on television and get better at surfing. 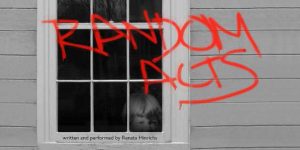 I would like to write and direct a film.

Cooking, eating and drinking red wine with my husband. Being by the ocean or a beautiful lake. Having lots of downtime to daydream. Being in nature, going to museums, listening to music and hanging out with my nieces and nephew.

All photos from Renata’s show are by  Maryann Lopinto.

To find out more go to:

Connect with Renata on Face book and Twitter http://www.facebook.com/renatahinrichsfanpage or https://twitter.com/#!/renatahinrichs

For tickets to RANDOM ACTS on October 18th at 6pm here’s the link: http://bit.ly/1nuGzZT

8 thoughts on “SPOTLIGHT on ACTRESS and PLAYWRIGHT RENATA HINRICHS”