It was another splendid evening of performances at Artists Without Walls’ Showcase at The Cell Theatre this past Tuesday. Mark Donnelly got the evening started with the opening monologue from his new play No Dead End (still a work-in-progress). A terrific performance, plus cool props — black-and-white posters of Humphrey Bogart, James Cagney, Spencer Tracy and the Dead End Kids in the background.

Honor Finnegan roused the crowd with her humorous lyrics and powerful voice. She sang a new song, “Fortune Cookie”, on which she played the ukulele; Aviv Roth joined her on guitar for Christine Lavin’s hilarious “Air Conditioner Song”, followed by Honor’s rousing blues, “Internet Junkie”. At the break, Honor was seen enjoying salted peanuts at the bar. Channeling Dizzy Gillespie for a future tune, Honor? “Salt peanuts. Salt peanuts!”

Cannes Film Festival and Obie award winning actress Renata Hinrichs gave an engaging and riveting performance of a section from her solo show, Random Acts.  The play brings humor and pathos to a time in our history we shouldn’t soon forget.  Tickets are now on sale for her second show, October 18th at 6pm, in the United Solo Festival  Link to tickets: http://bit.ly/1nuGzZT

Warren Malone, a New York based singer/songwriter who is originally from Manchester England, was joined by his eleven-year old son Gibson for a rousing set. They began with a Jerry Lee Lewis tune, “Whole Lotta Shakin’ Goin’ On,” with Gibson on the piano, pumping out a driving boogie pattern with his left hand while his right added some flashy ornamentation. They followed with Warren’s poignant song about his father, “Whole Life Blues,” and concluded with another great flashback, Fats Domino’s “Blueberry Hill.” A sensational performance by this very talented father and son duo.

Nicholas Garr opened the second half of the Showcase by giving a wonderfully moving and hysterically funny performance from his solo theatre piece Paper Tigers, which explores our shared issues of love, sex, ambition, and self image in a world where things are often not as they appear. And the lobster outfit was incredible! 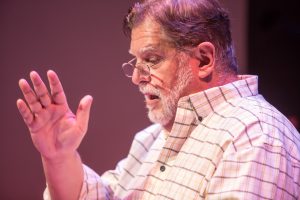 Marty Kleinman, the popular New York storyteller, read an excerpt from his new short fiction collection, Home Front.  Careening between heartbreak and hilarity, Marty’s tale took us on a white-knuckle joyride through the convulsing Bronx landscape of the late 1970s.   Through his spot-on dialogue of ne’er-do-well characters, and keen observations of life during New York’s nadir, we were reminded that there were darn good reasons why “Fun City” apartments could be had so cheaply back then. 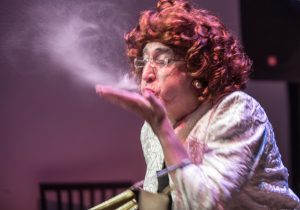 Last night, Steve Simring’s mother returned from the grave to tell a sympathetic audience about her less than successful marriage.  She rarely made mistakes, she said, but she screwed up royally when she married Simon. At last, according to her, she found vindication and understanding in a group of lovely, caring people at the Cell.  She’s happy to report that today she is resting peacefully. Perhaps she’s recovering from expending so much breath in the final moments of her act. You had to be there!

All in all, a great evening, bringing AWoW’s Summer Showcase Series to a close. The next Artists Without Walls’ Showcase will be at The Cell Theatre on Tuesday, September 23rd, 7pm, 338 W23rd St.

For more information on Artists Without Walls contact info@artistswithoutwalls. com