“Artists Without Walls allows the various artists to bring things they “make” to The Cell, to share with others.  Sharing my neon animations, MANAHATTA and THE ATOMIC ADVENTURES OF JACK KEROUAC last night was a real honor.  To have been able to offer the crowd a touch of fun and joy is the icing on the cake for an artist.” Jack Feldstein, animator and scriptwriter. 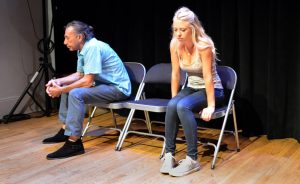 Jack Feldstein’s words echo the sentiment of Tuesday night’s performers who clearly were feeding off the energy  of the audience as well as their fellow artists.  Lorin Partalis and Larry Fleischman moved the jam-packed Cell Theatre with a poignant performance of a scene from A Cancelled Note, a new play by John Moran. John’s play, directed by Tess Howsam, transported the audience into the bittersweet world of a father and his grown daughter who find themselves at odds to the breaking point. Will they part forever?  John is currently shopping the full play with a production goal of March 2015. We’ll keep you posted on all future developments. 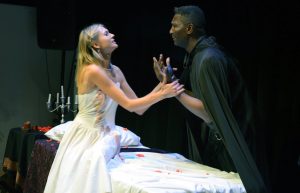 Desdemona’s death scene in Othello always comes with a high degree of difficulty and expectation. In the hands of Alessia Sushko and Sedly Bloomfield the audience was witness to a beautiful, passionate and moving scene. Love and fear was on display. Ms. Sushko’s beauty and Mr. Bloomfields’s presence left us wondering, “What would have happened if Desdemona had lived…?”

Singer Serena Jost captivated the AWoW audience with two of her new songs, “Silver Star” and “Bloom.” Accompanying herself on cello and guitar, the subtle poetry of her lyrics was highlighted by her beautiful, haunting voice. A transportive experience by a unique and delightful artist.

Vinnie Nauheimer  held the audience rapt as he read two poems about current events. The first, “Nigerian Girls Up in Smoke,” addresses the kidnapped and still missing girls from Nigeria, an event the world has chosen to ignore. The second, “Invisible Victims of Tuam,” deals with the missing remains of eight hundred children in the little town of Tuam, Ireland and the horrors of the Catholic run Mother-Baby homes. Vinnie’s poem suggest the notion that apathy can be the progenitor of evil. Vinnie hopes to include both of these poems in a book of poetry called Remembering the Children.

Maura Knowles’ new play Insult to Injury, which examines why we should never give up on angels or anyone with broken wings, was given a wonderful reading by Maura, actor Jack O’Connell and composer Nathania Wibowo. Maura, accompanied by Sean Chandra Irawan on piano, also provided the vocals to which one of the audience later said, “Such beautiful work, her singing soars through such glorious tones….She made the room sing!  And such wonderful collaborators.”

Pat Schneider and Joe Goodrich joined Honor Molloy for a reading from Prisoner’s Cinema, the book to an opera about three long-term inpatients and their psychiatrist. The scene is a darkly layered view into the backstories for the doctor and Natalia, who is actively suicidal. Joe’s portrayal of a psychiatrist was spot on and Honor, well anything Honor puts her voice to is spellbinding. 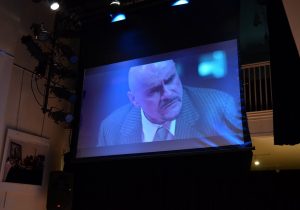 Steve Silver showed a clip from his feature film The Watchtower, a story of love and survival in notorious Hell’s kitchen, one man’s plight to get out of the gangster life and return to his birth land of Ireland. The audience was captivated by Silver’s sharp humorous dialogue which soon changed to a shocking execution scene of Harvey Steinberg (played by D.J. Sharp), a big time mob tied loan shark. Great ending, which left the audience in breathless silence.

Jack Feldstein closed out the evening with two fascinating neon animations, MANAHATTA, from the poem of the same name by Walt Whitman, and THE ATOMIC ADVENTURES OF JACK KEROUAC.  If you’d like to contact Jack for collaborations or simply to keep in touch, Jack asks that you feel free to find him through his website www.jackfeldstein.com .

And we would be remiss if we didn’t acknowledge the contributions that Noel Kilkenny, Consul General of Ireland and Hanora O’Dea Kilkenny made to New York’s Irish American community. They will now move on to their next assignment in Athens, Greece. Athens’ gain is our great loss.

Noel and Hanora’s efforts on behalf of business, tourism and promotion of the arts were tireless and they were gracious hosts to countless events during their four years in New York City. Additionally, Hanora was an enormous supporter of Artists Without Walls, referring many artists and constantly singing the group’s praises. During the evening Hanora was presented an award for her generous commitment of time and support of Artists Without Walls and the New York City multi-cultural arts community. She and Noel will be greatly missed.

The next Artists Without Walls’ Showcase is on August 26th, at the Cell Theatre.  For more information about AWoW write to: info@artistswithoutwalls.com