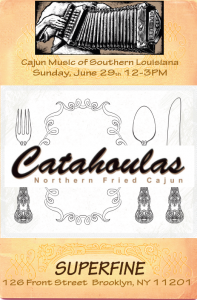 Today, from 12 noon-3pm, Deborah Monlux’s Catahoula Cajun Band will be playing at Superfine, a converted warehouse space with open kitchen, live music, bar and restaurant. Located at 126 Front Street, Brooklyn, NY  11201, in  the Dumbo neighborhood between Pearl and Jay Street.

Take the F train to York Street and walk one block to Front.  Make your day complete by walking after brunch to John Street , located between the Adams and Pearl Street waterfront, to see John Street Pasture, an art installation waterfront lot covered with beautiful crimson clover!  For reservations or tables near stage, call 718-243 9005     Directions

The Lobby is an Irish immigrant story, a modern American comedy, and an old-school farce all wrapped up in one terrific new play. A group of Irish ne’r-do-wells do whatever it takes to get ahead in New York. The result is one big, elaborate and extremely hilarious hoax.