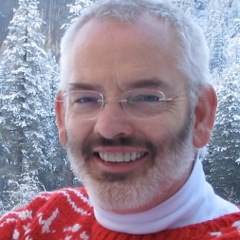 Who is Ed McCann?

The first thing I wanted to be when I grew up was a park ranger; I wanted the cabin, the Jeep, the dog, and the hat; I wanted to be that guy down front in the amphitheater with the clicker, narrating the night-time slide show about raccoons, with fireflies winking on and off in the tree line.

In a sense, moving to New York’s Hudson River Valley to finish college was a dream come true.  I fell in love with the place and chose to make my home in a semi-rural part of Ulster County; today I continue to enjoy all the pleasures of those childhood camping trips – relaxing by a fire beneath the stars, listening to the calls of owls and coyotes – and I don’t have to carry water and firewood or wear flip flops in the shower. 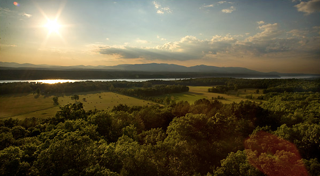 Six years post-college as a local television writer and producer afforded me extraordinary access to many of this region’s cultural and historical treasures, and turned me into a genuine Hudson Valley booster.  As a history nerd, it was thrilling to bring a video crew to a location like the FDR home in Hyde Park and have the curator remove those velvet ropes for us.  I left broadcasting for a year-long stint creating cooking videos at The Culinary Institute of America before my partner Richard Kollath and I struck out with our own business, Kollath-McCann Creative Services.  Richard and I have spent the last twenty years producing books, magazine features, television segments, and special events from our home office and studio outside New Paltz.

First and foremost, I’m a professional writer with features and essays published in national magazines and literary journals (American Baby, Better Homes & Gardens, Country Living, Gardener, Good Housekeeping, Ladies’ Home Journal, The Sun and more).  I’m a longtime contributing editor at Country Living, I’ve written the text for Richard Kollath’s design books; and my blog, My Rescue Mutt, chronicles my adventures with Willie, an eleven-pound canine from central Louisiana who looks like a Border Collie someone left in the dryer for too long.

Incidentally – as a long-time gardener and bird feeder I’m no longer so enamored of those raccoons.  Did you know they have opposable thumbs?

My training as a producer – managing crews, locations, budgets, and deadlines – provided a valuable skill set that’s translated into several arenas.  Most recently, Richard and I have been heading interior design projects at various National Historic Sites – a few of which are located in Yosemite National Park in northern California.  It’s been a privilege to toggle back and forth these past several years between The Hudson Valley to The Yosemite Valley.

On the writing side, I’ve recently completed a memoir and am at work on a second one that tracks my family from Ireland to Brooklyn and to the stages of Vaudeville.  I’m building a collection of observational essays that relate to the various critters that share the land surrounding our home, and I’ve been faithful with my twice-weekly blog posts at www.myrescuemutt.com

Most recently, I’ve been focused on the launch of a new literary endeavor called Writers Read — a platform showcasing both established and emerging writers and a celebration of writers, writing, and the spoken word.  Our live, staged events planned throughout the year will be organized around a single, broad topic that invites a range of expression.  Individual readings will be professionally videotaped for web streaming, and audio recordings of the staged readings will be edited for broadcasts and podcasts.  Upcoming topics and deadlines are listed under the submissions tab of our website: Writers Read Online

.
If you share our passion for good writing and original voices, visit our website to join our e-mailing list and help us spread the word.  To paraphrase humorist Dan Zevin, who joins us at our launch event on June 14, please also “Like” our Facebook page; you can still hate us in real life.

The inaugural event for Writers Read is called Listen To Your Father.  Inspired by Listen to Your Mother , a national live reading program launched in 2010 in Madison, Wisconsin, it takes place this Saturday, June 14, at 2pm at The Cell Theater on West 23rd Street in New York City.  Featured writer Steven Lewis said it best in this email message he sent this week to his friends:

“Mark your calendars and take the old man—or if you’re the old man, take someone who loves you—to this fabulous celebration/remembrance of fatherhood.

I know that most of you are already shaking your heads no and possibly breaking out in hives, but I promise this will be the best of all possible literary events: Ten really FINE writers reading ten really SHORT pieces that are guaranteed to make you laugh, cry, and remember that guy with enduring fondness (despite, you know …).  We’ll even get you outathere in less than two hours.  Plus, it’s the day before Father’s Day, so there’s no conflict with golf, grilling or going to the stadium (or, dare I mention it?— it might just get you off the hook and you can have Sunday to yourself).”

Who are the writers, past and present, you most admire?

I have loved reading ever since that remarkable moment when the letters on the page arranged themselves into recognizable words.  My first favorite writers were Hans Augusto Rey and Margret Rey who co-authored the Curious George series.  What a thrill to be issued my very own library card – a license to carry home stacks of those slim yellow hardbacks filled with George’s adventures (“he was a good little monkey, and always very curious…”)

Whew.  And there’s a lot more on the shelves upstairs.

What are three of your favorite literary works?

Creative inspiration sometimes comes from those who strived for something and failed, or who wished for something but didn’t actually to the work to achieve it.  It’s the motivation of the negative example.

There are many memoirists and non-fiction writers who inspire me, but I’m really inspired by kindness and generosity as much as by someone’s talent; people who make the time — and the room — in their lives to help others and transmit knowledge without any personal gain.  These are people who make you want to pay it forward, and on that scale – and within my personal sphere — my partner, Richard Kollath, rates near the top. 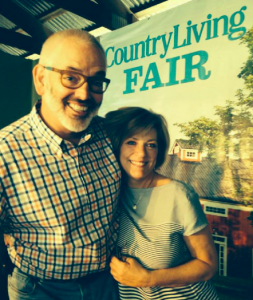 I’d like to publish my book, I’d like to start a foundation to support writers and writing, and I’d like to spend a lot more time on my bike and in my kayak.

I’m doing it right now, in real time, and just launched Writers Read Online The site will become a resource and a repository for both writers and readers, and the live events I’m designing are the type of events I’d really want to attend myself (I once brought binoculars to a Sarah Vowell reading in Troy, NY.  And I was in the third row).

Reading and writing.  Time with friends and family is also really important to me – and it’s even better if that time involves bikes or kayaks.