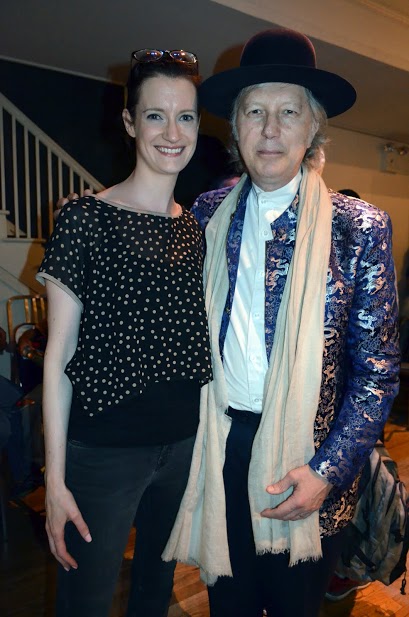 “The scope and depth of the performances of these evenings continue to amaze me. I know of nothing like this that exists elsewhere. And elsewhere is a big place.” Ron Vazzano, Poet and Author

“I’m happy to be a member of this wonderful group, Artists Without Walls, which does so much to promote artists (in the broadest sense) from NYC and around the world.” Paul Bevan, Sound Engineer, Production and Tour Manager

“I felt at home with the sophisticated audience and outstanding performers. The taste of The Cell made me desire to come back to perform a full-scale concert. I am honored and humbled by the experience of Artists Without Walls.” Croatian American, Recording Artist, Nenad Bach.

Singer/Songwriters Niamh Hyland and Michael Brunnock opened the evening with their new tune “To Live To Love.” This wistful duet, melts their beautifully matched voices into one sound, which aptly captures the essence of the love song.  They followed it up with the ballad “General Munroe” written by Roger Casement, with music by Michael from his upcoming musical honoring the life and works of Casement.

Fiction writer/storyteller, Marion Stein performed “A Cellar Full of Caskets.” The story was initially developed in the “Narativ Inc.” workshops and had been previously showcased on the radio station WBAI. This was the first time Ms Stein had the opportunity to perform it in front of a live audience. As with her fiction, the story involved universal themes of connection and loss – told in a distinctly urban voice, and not without occasional humor. For more of Marion’s stories click here www.marionstein.net

Nacho Arimany, a much sought after Flamenco percussionist in Spain, engaged the audience with the experience of “Elemental Sounds and Rhythms,” helping us to unfold our natural voices and full creative potential through movement voice and joyful elemental rhythms. The experience was empowering. The vibrations of his voice and the singing bows creates a wave of trust and wonder. Arimany’s body percussion, in conjunction with the audience participation, is mesmerizing. He reminds us that we are the “Rhythm,” we are the “Drum” and that the pure “Voice of the Universe” flows eternally through us when we align our bodies and brains with natural patterns of growth.  “I’m looking forward to future collaborations with your organization,” Nacho said. “Very inspiring with vibrant quality.”

Shirley Hershey Showalter read a story from her memoir Blush: A Mennonite Girls Meets a Glittering World. She read of Vicky Martinez, the little girl from the Lower East Side who entered her life when she was five years old, a Mennonite girl on a dairy farm. The writing was crisp, the delivery impassioned, and the ending a moving surprise. I promise: you will be transported, says Bill Moyers of Shirley’s memoir.

Rock guitarist and singer Ann Klein stomped in her chair and got folks stomping along to her three original tunes, “Tango Wrangler,” “Remember to Forget” and “Chocolate Pie.”  Everyone was asking for a slice of the pie at intermission.  You can catch her full band for her cd release show on July 16 at NYC’s Rockwood 2.

Nenad Bach’s music is a potent shot of rock infused with heart and soul, packed with provocative lyrics, which call back the ethos of the sixties, unafraid to question, determined to seek answers, and a rousing call to action that electrifies the listener. Through his singing and songwriting, Nenad’s goal is to spread the message of joy and universal peace. Nenad and his band, which includes Nenad, Joe DeSanctis, Richard Lindsey, Michael O’Keefe and Hank DeCora. performed two songs. Everything Is Forever and I Will Follow You,

Nancy Oda gave a wonderful Bloomsday reading on the Nausicaa section of Ulysses by James Joyce.  She read the Gerty MacDowell piece portraying Gerty as romance struck girl who creates a “moment” with Leopold Bloom. A witty and impassioned performance.

The evening concluded with a tour-de-force performance from a work written by the very talented actor David Sharp. His portrayal of Tennessee Williams in his final three days of his life at New York’s Hotel Elysee was spellbinding, witty and brought down the house. A brilliant end to a night filled with one great performance after another.

The next Showcase at The Cell will be on June 24, 7pm, 338 W23rd St. For more information about Artists Without Walls contact info@artistswithoutwalls.com