“What an honor to perform for Artists Without Walls – truly. The audience – everyone was so warm and welcoming.” Actress and playwright, Erin Layton

Connie Roberts began the evening with a reading of two poems from her Patrick Kavanagh Award winning poetry collection, Not the Delft School.  The first poem, The “Potato Picker,” which draws its inspiration from Jean Francois Millet’s iconic painting “The Gleaners,” depicts the stoicism of a poor farmer (her father) in 1970s Ireland, who continues to pick potatoes as the TV rental man repossesses the unpaid black and white television.  Her second poem, “Wounds,” is a darker portrait of her father, a violent alcoholic, who perpetrates a heinous act against her mother.

Honor Finnegan followed, Connie, belting out a soulful, “Down So Long” by Bobby Darin. She also sang a piece of her own called “Swimming,” which, as Honor said, “Is Irishy and therefore tragic and beautiful.” The perfect “Honorism.” 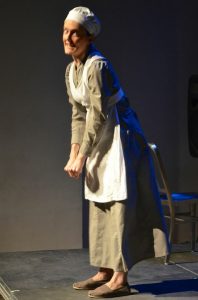 Playwright/performer Erin Layton performed a riveting and emotional scene from her award-winning one person, multi-character drama, MAGDALEN based upon the true stories of the women and children who labored in Irish Catholic workhouses operated by nuns in the mid-twentieth century. Erin seamlessly embodied and transitioned between four of the eight characters in her solo play, introducing us to a pair of nuns and two of the child laborers one of whom is severely crippled and cannot manage the labors demanded of her. 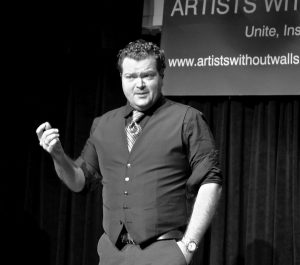 Karl Scully, former member of the Irish Tenors, who has performed in Carnegie Hall, Lincoln Center and hundred of venues internationally, wowed the audience with two songs.  The first song “McBreens Heifer” was written by Percy French, the second “Knocknashee” a modern day Sean Nos creation written by Brendan Graham and Neil Martin. 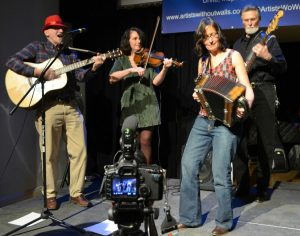 The Catahoula Cajun Band, with Julie Winterbottom on accordion, fiddler Deborah Monlux, Frank Luschinsky on bass and vocalist and guitarist Michel Henry provided the entertainment during intermission.  The group performed Allons a Lafayette, Lacassine Special and more. The root and spirit of their music stems from Cajuns whom played at home gatherings, clearing out all the furniture and bringing in musicians who would play until early in the morning in celebration of life, or “la joie de vivre.” The music was uplifting and spirited and a had a few of the audience “clearing out the furniture” and dancing across the floor.

The second half of the evening began with the opening pages of Joseph Goodrich’s short story “The Ghost of Brooklyn Past,” which was expertly read by Jack O’Connell. Jack found all the warmth and pathos of Goodrich’s story and proved once again what a superlative actor he is.

Bernard Smith closed out the evening with an original song called “Sandy” named for  devastating 2012 storm.  In one short day (the day after the storm) Bernard woke up displaced as well as losing his car to the salty sea. All over the Rockaway 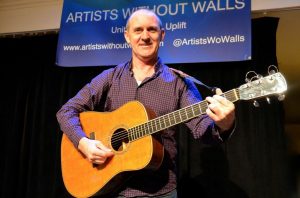 Peninsula and Long Beach he saw devastation and thus he was inspired to write a song about it, bearing witness to what he’d lived through. The second song he sang was “The May Morning Dew,” a story about the Irish diaspora. The song is a lament from a man in the winter of his life, remembering vividly the old homestead, a place and a people he will never see again.