“The event last night was replenishing, especially because of AWoW’s spirit and the vibe among the people. They were all so happy to be there.” Justine Blau, author of Scattered: A Mostly True Memoir.

Afro Peruvian guitarist Yuri Juarez and percussionist Jhair Sala got the evening off to a great start with a song called “Idolatría.” The song is a traditional Peruvian waltz with a free and open interpretation for guitar and cajon.  Yuri and Jhair followed with “Arroz Con Concolón,” a Festejo or in English a celebration. “Arroz con concolón is rice with the toasted rice in the botton of the bowl. You can see that in the Spanish paella. It’s delicious,” Yuri explained through his infectious laughter.   Great music, a great beginning.

———-
Nick Garr followed with an outstanding performance from his solo theatre piece, Paper Tigers. Written by Nick, the work is a stunning combination of comedy and drama. Nick meshed his great physicality with piped in sounds as diverse as spraying mouthwash, bullets flying through the air and screams to create an intense piece of theater.
———- 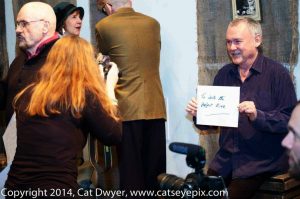 Actors DJ Sharp and Mary Tierney were splendid in a scene from Joe Davidson’s Looking for Cans. DJ, as the butler Philip, perfectly captured the lubricious behavior of Philip, as he attempts to extort money from his boss, the wealthy socialite Mary Wellsworth. Mary T, as she always does, slipped into her role of “wealthy socialite,” well, as if she were one. Is she?  A stirring scene brought alive by two great actors.

———-
Jim Hawkins, making his first appearance with AWoW, began his presentation by giving the audience a brief background on the life of Eamon Kelly, the great Irish storyteller or seanchai.  Jim followed with a wonderful rendition of Eamon’s story, “The White Cat,” and concluded with a spirited version of Tommy Makem’s humorous song, “The Liar. Of Jim’s performance, actor Jack O’Connell said, “I love watching a great pro who’s come prepared.”  Well said and right on the mark.
———- 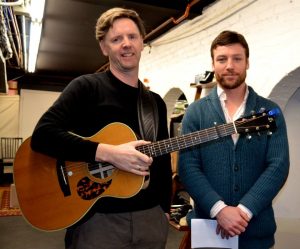 Actor John Duddy and singer/songwriter Michael Brunnock opened the second half of the show bringing to life the extraordinary character that was Irish Nationalist, Roger Casement. Their passion for telling Roger’s story was palpable and truly compelling in its intensity. If this is a taste of what’s to come , then I believe the audience is hooked.  John and Michael aroused the listener’s curiosity through haunting melody and Casement’s own words, telling the story of one of the great humanitarians of this century . “I believe Roger Casement and what he represents is as important today as when he died, one-hundred years ago. I am privileged to tell how I see his story and working with John Duddy on this has been such an inspiration to me ” said Michael. “We are so excited to work together and looking forward to producing the full show in the late spring.”  And we’re looking forward to having this dynamic duo return.

Aedin Moloney, one of NYC’s finest actresses, performed a scene from her award winning performance in A Most Dangerous Woman, a play about writer George Eliot. During this bravura performance, Aedin held the audience captive as she brought to life the disappointments and frustrations of being a great woman writer in a man’s world.

Mary Lannon charmed the crowd reading from her completed novel An Explanation of the Fundamentals of the Derivation of Dilapidated Brown Station Wagon Theory aka How I Became A Scientist and Discovered the Truth About Getting Stuck in the Wrong Universe by Miranda J. McCleod.  (Yes, that’s the title.) She also encouraged everyone to “Facebook Friend” her main character Miranda J. McCleod as she seeks out an agentpublishing opportunities for this terrific young adult novel. 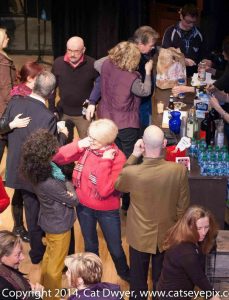 Actor Andy Baldeschwiler closed the evening by sharing the Tom Robbins’ travel story “Two in the Bush”, depicting a couple’s romantic mis-adventures in the African wild. His animated and hilarious performance elicited many appreciative guffaws from the crowd and was the perfect send off into a chilly New York night.