“What’s been needed so desperately is what AWOW gives us, a loving ear to witness. That room, that audience of art friends, people that really understand and want to see you express it. Wonderful!” Mary Tierney, actress

And we expect more of that tomorrow night, Tuesday, January 28th, 7pm, at The Cell Theater in NYC.

Nicholas Garr has appeared on Broadway, Off-Broadway, and around the U.S. in productions of A Streetcar Named Desire, A Doll’s House, Godspell, Brigadoon, Orpheus Descending, West Side Story, and Jerome Robbins’ Broadway. His television credits include Law and Order, Dream On, Another World, and Loving; and independent films Joey and Mike and Doctor’s Intentions. Nick is also the founder of City Theatre Project, a not for profit group, which teaches young teens theatre arts in the South Bronx. Nick will performing a piece titled “Action Hero” from his solo show Paper Tigers. 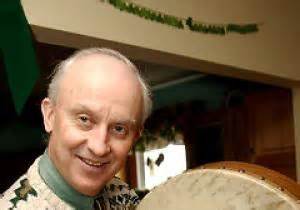 Seanchai JimHawkins will be making his first appearance at an AWoW Showcase. Jim will  be telling “The White Cat,” a story of  one of Ireland’s great storytellers, Eamon Kelly, and singing a song “The Liar” that was written and sung by the great Tommy Makem of the “Clancy Brothers and Makem” fame.  Jim will accompany the song on the Irish drum, more accurately known as a bodhran. (bow-ron)

Actors Mary Tierney and DJ Sharp will be performing a scene from Joe Davidson’s play “Looking for Cans.” In the scene, the butler Phillip (DJ), is attempting to extort money from Ms. Wellsworth (Mary) through the revelation of  a strange encounter thirty years earlier with a now homeless veteran. Joe’s play will be performed at both the Manhattan Veterans Hospital and Northport Veterans hospital and the ultimate goal is a fundraiser for the Wounded Warrior Project.

One of the evening’s highlights is sure to be Afro-Peruvian guitarist Yuri Juarez, who will be joined by the great Peruvian percusionist Jhair Sala, one of the most sought after percusion players in the city. Yuri, who was named the 2009 Latin Jazz Guitar Player of the Year, has crafted a distinct approach to jazz harmony and improvisation, placing it carefully among Afro-Peruvian rhythms.

Singer/songwriter Michael Brunnock and actor John Duddy, who is seamlessly making his way from being a champion boxer to a top notch actor, will be performing an excerpt from Michael’s highly anticipated new work, a musical drama highlighting the life and legacy of Irish Nationalist hero Roger Casement. Of his award winning album, Orchard, one reviewer said, “…encapsulated by the slow build-up of rich, warm harmonies, uplifting melodies, and beautiful folk instrumentation.” 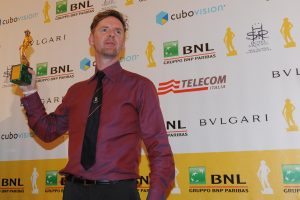 AWoW member Mary Lannon will be making her first reading in front of an AWoW audience. Mary will be reading from her finished, young adult novel An Explanation of the Fundamentals of the Derivation of Dilapidated Brown Station Wagon Theory aka How I Became A Scientist and Discovered the Truth About Getting Stuck in the Wrong Universe by Miranda J. McCleod (Yes, that is the title…I confirmed it…twice) and sharing a little about publication strategies.

Actress Aedin Moloney, who has had great success in the last few years in her roles in Dancing at Lughnasa and Air Swimming, and most recently in her brilliantly reviewed A Most Dangerous Woman about the life of George Eliot, asked if her presentation could be a “bit of a surprise.” Why not? Whatever Aedin comes up with is bound to be incredibly special. We’re honored to have her.
———- 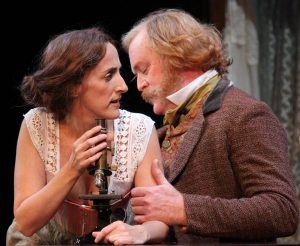 Aedin Moloney in “A Dangerous Woman.”

And closing out what is sure to be a great evening will be actor and voiceover artist Andy Baldeschwiler.  Andy’s recent stage credits include work with The Pearl Theatre Company, Shakespeare on the Sound, The Glass Eye, and the Accidental Shakespeare Company; he has also appeared in a few short films and web series.  A lover of words and storytelling, Andy said “I’m excited to be sharing with the AWoW audience some humor and wit from one of my favorite writers.” Can you guess whom that might be?

One thought on “ARTISTS WITHOUT WALLS' FIRST ANNIVERSARY SHOWCASE at THE CELL, TUESDAY, 1/28/14”