“Absolutely amazing night. Thank you so-so much for all that Artists Without Walls does. It was a stellar line-up filled with love, light and laughter.” Author Honor Molloy

Last Thursday’s “Showcase at The Cell” opened with two works that were recently performed at Lehman College as part of the Artists Without Walls’ performance of “Rise Up Singing: Women in the Labor Movement.” Honor Finnegan opened with a rousing  rendition of Jack Hardy’s “Ain’t I a Woman,” and spoken word artist Koro Koroye followed with a poem she wrote for “Rise Up” called “Sickness of Freedom” about the struggles of African American women after the Civil War.  Koro added an additional poem, “I Can Write About That Too.” Her performance, which highlighted the art of storytelling and spoken-word, was filled with energy, passion, and strength.

Drummer Scott Kettner followed with a dazzling blend of Brazil and New Orleans sounds in a pandeiro solo that pulsed with rhythm and energy. His drumming seamlessly blends the Louisiana second-line sound with a Brazil-ified backbeat. Neatly juxtaposed between Scott’s music and a theater piece to follow, Gary Ryan beautifully read a passage about the self-sacrifice of Percival’s sister, from “The Quest of the Holy Grail.”

Kate McLeod, producer of New York City’s “Bacon Theater Festival,” presented two short works from the festival. First, Kirby Sybert, Anna Smeragliuolo and Rob Ackerman performed Ackerman’s six-minute play “Forgiveness,” a rhapsody on the guilty pleasures, spiritual overtones, and persuasive powers of the world’s most compelling pork product…bacon. Doug Shapiro and Cristin Hubbard were also on the “bacon plate,” singing the high notes and the deep bass for Rob Hartmann and Kate’s short opera—an AWoW first—“One Weird Trick.”   A couple in trouble find their way back to loving each other through a bacon cleanse.  (That’s right a “bacon cleanse.”) To say it succinctly, the talented duo of Shapiro and Hubbard nailed it.

Nestled snugly into the middle of a talented and diversified lineup, producer and editor Sam Adelman presented several sequences from “That Daughter’s Crazy,” a new documentary starring Rain Pryor. Using footage from her autobiographical one-woman show, and mixing that with family interviews, an entertaining portrait emerges of a confused, multi-racial child of a celebrity icon. The full film is an official submission for the 2014 Tribeca Film Festival. 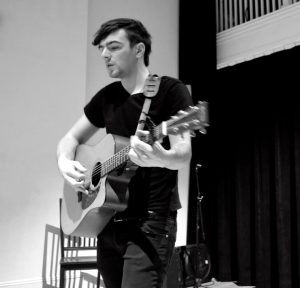 Young singer/composer Brían Farrell from County Leitrim Ireland kicked off the second half of the evening. The singer-songwriter performed two of his own acoustic rock songs “Moondance” and “Try,” and rounded out his set with a Roy Orbison cover of “Mystery to Me,” which was written by Bono.  Clearly, Brian’s a star on the rise.

Jose Roldan performed a scene from his one man show “Father Forgive Me for I Have Sinned,’ an award winning auto-biographical coming of age story of a young Latino boy who grew up in the South Bronx of New York City in the 80′s/90′s.  Jose masterly took the audience on a roller coast ride of emotion, from hilarity to poignancy and back. Positively brilliant work. 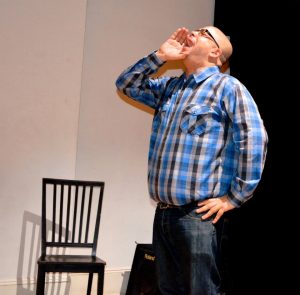 Honor Finnegan stepped up once again and sang two witty, topical, seasonal songs: “Snow Day,” about the need to pause and “Jesus’s Birthday,” about rampant holiday consumerism. Accompanied by guitarists Aviv Roth, she closed with Internet Junkie – a satirical blues number, about “internet addiction.” Not only is this lady talented, she’s incredibly versatile. Great performance.

Honor Molloy closed the Holiday program reading a piece from her novel “Smarty Girl – Dublin Savage.” It’s 1966 and Noleen O’Feeney goes wandering among the market stalls on Moore Street. She gets an earful from a tangerine dealer about the first Christmas Eve. This was Honor Molloy at her absolute best, instantly transporting the reader—shes’ as good at doing that as anyone I’ve heard—to another time and place, in this instance, the streets of Dublin.