“Eloquent writing, beautiful voices, charismatic performers who connected with each other — it was an inspired evening.” Justine Blau, author of “Scattered: A Mostly True Memoir,” after attending “Rise Up Singing: Women in the Labor Movement” at Lehman College.

On Tuesday night, The City & Humanities Program, in conjunction with the CUNY Institute of Irish American Studies and the Department of African American Studies at Lehman College, presented writer/creator Charles R. Hale and a brilliant cast of Artists Without Walls’ members in “Rise Up Singing: Women in the Labor Movement” a multi-media event incorporating storytelling, film, photographs and music.

The evening began with Honor Finnegan’s rousing performance of Jack Hardy’s “Aint I A Woman,” a song borne of Sojourner Truth’s speech on gender inequalities. Actor Jack O’Connell followed with an introduction in which he quoted author John Steinbeck: “We learn a great deal about people by listening to their music. Listen to their songs, for into the songs go the anger, fears and frustrations, the hopes and aspirations.”

Throughout American history, activists have adapted the lyrics from spiritual songs and applied them to various causes. Singer Antoinette Montague and pianist Sharp Radway followed a short story, accompanied by photos, of the deadly 1911, New York City, Triangle Shirtwaist factory fire, with an inspired rendition of “We Shall Not be Moved,” a American folk song whose lyrics date back to slave era.  One-hundred-forty six women, mostly young immigrants, lost their lives at the Triangle factory fire.

A year after the Triangle fire, striking women mill workers in Lawrence, MA were surrounded by the threat of physical harm. They continually sang “Bread and Roses,” a poem written by James Oppenheim, put to music. Honor Finnegan and guitarist Vincent Cross gave rise to the spirit of that event with an intense performance of “Bread and Roses.”

Following the Civil War, racial prejudice kept African American women working in jobs such as cooks, maids and laundresses. Spoken word artist Koro Koroye presented a poem that she wrote, called “The Sickness of Freedom,” which poignantly describes the difficulties faced by African American women, many of whom were slaves and daughters of slaves, in the post Civil War era. 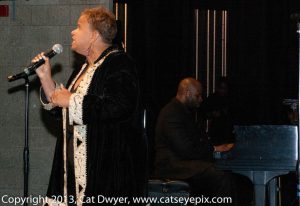 Woody Guthrie was an American singer-songwriter whose musical legacy includes hundreds of songs about the experiences of the poor and oppressed. Woody’s song “1913 Massacre” is one of the most powerful interpretations of the Calumet, Michigan tragedy in which seventy-three people, mostly striking miners’ children, were trampled to death on a staircase during a Christmas Eve party. Vincent Cross evoked the spirit of Calumet and Woody with a stirring rendition of Woody’s tune.

Women have written a number of “workers” songs. One of them, Diana Jones, performed two songs she’s written, the heartbreakingly tender “Henry Russell’s Last Words,” in which she was beautifully accompanied by violinist Annette Homann, and “I Told the Man.” Each song tells the story of miners trapped hundreds of feet below ground, writing farewell notes to their families.

In the summer of 1968 six miners were trapped for 10 days in a cold, flooded mine in the Appalachian hills of West Virginia.  Jeanne Richie wrote a song from a wife’s viewpoint called “West Virginia Mine Disaster.” Honor Finnegan sang and performed from the perspective of a trapped miner’s wife and Jack O’Connell played the trapped miner who describes the horror of the experience. The back and forth between Finnegan and O’Connell was exceptional and one of the evening’s many spectacular performances. 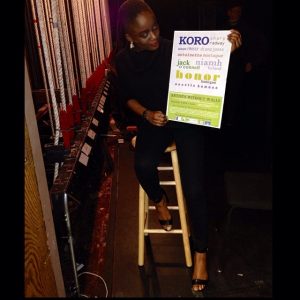 Addie Wyatt, who became the first African American woman to retain a high position in an international union, couldn’t do enough for people.  She was born into poverty in Mississippi in 1924 and grew up in Chicago during the depression. When Addie was a child she played piano for her church choir…she even sang with the great gospel singer Mahalia Jackson.  Addie’s life was marked by “getting over” indignities such as discrimination and prejudice. Koro’s poem “Praise,” speaks to the pain of Addie’s setbacks but ends triumphantly with the words “I prayed until I got over.” This was a perfect lead-in to final tune of the evening, “How I Got Over,” which was popularized by Mahalia Jackson. Singer Montague, pianist Radway, violinist Homann and Koro combined to create a unique and rousing ending to the show.

2 thoughts on “REVIEW of "RISE UP SINGING: WOMEN IN THE LABOR MOVEMENT"”