Who is Darrah Carr?

Darrah Carr Dance is delighted to be celebrating our 15th Anniversary Season at the Irish Arts Center from November 22 – 24.

We will be premiering several new works, including one by guest choreographer Seán Curran!  To commemorate our anniversary, Macater Press has published a retrospective artist catalogue of our repertory entitled ” ModErin Contemporary Irish Dance Works-Darrah Carr”  We will be having an Opening Night Reception and Book Launch immediately following our performance on Fri, Nov 22.

What honors have you received?

Most recently, Darrah Carr Dance and guest choreographer Seán Curran were nominated for a 2012 Bessie Award for “Dingle Diwali: Outstanding Production of a Work that Pushes the Boundaries of a Traditional or Culturally Specific Form.” 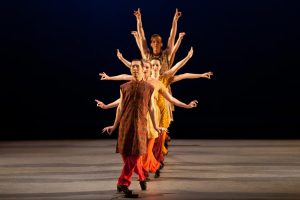 What is ModErin and how did it develop?

ModERIN is a term that I’ve coined to describe my choreographic interest in drawing from the tradition of American modern dance and the tradition of Irish stepdance in order to create a blended style of contemporary dance choreography.  The fusion of two words – modern (dance) and ERIN (an Irish American reference to Ireland) symbolizes the creative fusion of two dance disciplines as seen in the work of Darrah Carr Dance.  The structure of Irish dance – revealed in its percussive rhythms, its spatial patterns, and its traditional music cycles – provides a wonderful template for modern dance choreography.  Modern dance, in turn, frees the torso from the rigidity of Irish dance and frees the body to work with gravity, to engage in counterbalance and non-gender specific partnering, and to use the floor as an extension of one’s kinesphere.  ModERIN is not just a descriptive term for two styles sharing the same stage side by side. Rather, it is a choreographic principle, a tightly woven marriage of modern dance freedom and Irish dance structure.

Who are the dancers you admire, past and present?

Tim O’Hare – for his elegant grace and the bottomless patience that he displayed as my first teacher.

David Parker – for his rhythmic genius.

Michelle Dorrance – for her amazing virtuosity.

Mark Morris – for his intense musicality.

The 55 dancers who have been part of Darrah Carr Dance over the last 15 years are my greatest inspiration.  They brought the choreographic vision to life and their talent and dedication has never ceased to amaze me.  I am especially inspired by the beautiful dancers that I am currently working with for our upcoming season including: Chris Armstrong, Louise Corrigan, Brigid Gillis, Erin Hayes, Timothy Kochka, Caitlin McNeill, Niall O’Leary, Laura Neese, Melissa Padham, Mary Kate Sheehan, and Alexandra Williamson.

I would love to be a singer – although I have an absolutely horrible voice!

Or – a drummer – which might be a tad more realistic given the rhythmic training that I have in Irish dance.

My parents enrolled me in both Irish dance and ballet lessons as a child.  They dutifully drove me to rehearsals and competitions day in and day out for years on end.  I remain eternally grateful that they laid the foundation for me and encouraged me to explore my passion for dance to the fullest.

Photos from top to bottom: