Ever think it’s too late to start over? Ever worry about acceptance? My friend Jeanie Raffa is one of the most thought-provoking, compassionate people I know. Read Jeanie’s short story about courage, self-acceptance, and open-heartedness. If you’ve ever struggled with these issues you’ll find this worth a few minutes of your time.

Something Different About Last Weekend

I want to tell you about last weekend.

But first, some background.  Around 35 years ago, my husband’s youngest brother, Tony, called us late one night from college to tell us he was gay.  My first reaction was surprise.  This was in the late seventies, when homosexuality was still so closeted that the average straight person rarely thought about it, let alone openly encountered it. 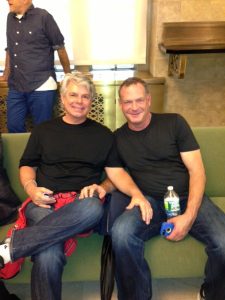 My next reaction was a flash of understanding. Suddenly Tony’s unhappiness and occasional troubling behavior as a teenager made sense.  How alone he must have felt. How he must have despaired of ever finding acceptance.

That’s why my third reaction was admiration for Tony’s courage. Where had that come from? What pain had brought him to this place?  How much more would he experience now that he had chosen to reveal his truths to a judgmental and unforgiving world? I had never met anyone with that kind of bravery before, and I was in awe of it. Could I be that brave?  I didn’t think so. I was still too afraid of failure and censure to leave the conventional path I was on.

Years passed.  Tony became an interior designer and thrived in a profession he loved. Eventually he started his own successful design firm in Houston. Meanwhile, I grew increasingly unhappy with myself. Unlike Tony, I didn’t love my work as a college professor, but I was too afraid to quit and start over.

Then, when I thought there must be something terribly wrong with me and had given up hope of ever finding fulfillment, I discovered Jungian psychology. Afraid of what I might discover about myself, but even more afraid of wasting my truths on an unlived life, I turned within and stepped into a bold new adventure of self-discovery and authentic living.

By the time Tony and Scott met I had quit teaching and written my first book. Two years later they invited Fred and me to Houston where I conducted their commitment ceremony. Never have I felt such warmth and kindness, such sincere interest and approval, as I received from their friends that weekend. The natural, unforced acceptance of these total strangers was a revelation. 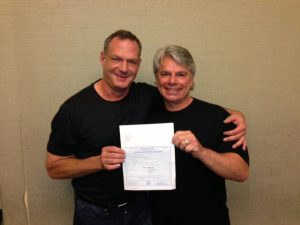 Since then I’ve encountered this attitude many times. Always from Tony and Scott and their friends. Most recently I felt it last weekend at the city clerk’s office in New York where Fred and I went to witness their marriage. While waiting for their number to be called I sat next to a producer of Broadway musicals. In just moments, he and his partner would be legally married after being together for 35 years. They, too, exuded a rare, unguarded friendliness.

What makes people like this so different from the norm? I found my answer at the play we attended that night. Kinky Boots is a delightful musical about a young man who saves his father’s shoe factory by making boots for drag queens. Its theme is acceptance: how it is withheld by some and freely given by others.

Most of us have been hurt by some form of prejudice, whether because of our nationality, race, religion, social or economic class, age, appearance, gender or sexuality. The people who automatically judge and reject us do so because they fear and reject their own differentness. Those who freely accept us have broken through their fear and found the courage to accept themselves.

Reflecting on last weekend, I realize why it was so very special for me. Since that late night phone call so many years ago Tony has been a beloved teacher who paved the way for me to stop fearing my life and start living it. He did that by showing me what courage, self-acceptance, and open-heartedness look like. These are among my most treasured lessons and I will always be grateful.

Congratulations, Tony and Scott!!  May your marriage be long and happy.  And thank you for being in my life.

You can find Jeanie’s Healing the Sacred Divide at Amazon and at Larson Publications, Inc.

2 thoughts on “ON SELF-ACCEPTANCE, COURAGE AND OPEN-HEARTEDNESS”