Singer/songwriter Ed Romanoff said, “If you were to put Ed Sullivan, Oscar Wilde and TEDTalks into a blender you’d get Artist Without Walls. The Showcase is a friendly environment for artists to share their work and start unique collaborations in a remarkably intimate setting.  One of the most receptive and fun shows I’ve been a part of…”

Poet Angela Alaimo O’Donnell offered a powerful reading of selections from her books Moving House, Saint Sinatra, and Waking My Mother. Hers are fierce, finely-wrought poems that embrace unlovely realities–the hard life of “Coal Town,” the families that labor beneath its ashen skies, the death of a father, the loves of a mother, spiritual hope dogged by spiritual despair.  O’Donnell’s superb, inspired language and forgiving imagination have somehow survived the “slag heaps” of home.  Her passionate performance offered public witness to the power of poetry to speak the unspeakable, to articulate for us all what we cannot, and to redeem our lives and losses through beauty.

Ceramic artist Sana Musasama began her compelling performance, which included a filmed photo-journey of her art and travels, stating that as a world traveler she seeks out the comfort and protection of women in traditional cultures She visits markets that are dominated by women who invite her into their lives, guide her and teach her; they feed her passion.   Sana’s work is about an experience that triggers an emotion , sometimes a place or a  time.  She then submerges herself with information that informs these ideas and concepts. As she said, “When I feel this overwhelming presence I poetically call my  extra heart beat.  I then pick up my clay and begin to build.”

Visiting Irish writer Alan McMonagle read from his newly published collection, Psychotic Episodes. In ten captive minutes he excerpted a story that manages to accommodate a six-hundred-year-old woman, a talking cat, a marijuana grower, a pair of deaf and blind philosophers, a notorious womanizer, and a Yoga Master become property developer.  We hope to see Alan back in the States soon. A most welcome addition to the AWoW lineup of talent. 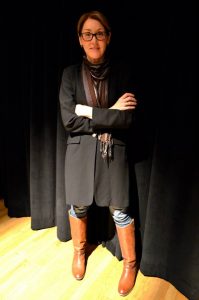 Singer/songwriter Diana Jones made a dazzling Showcase debut singing three songs. She opened with “Henry Russell’s Last Words,” a song she wrote, based on a letter a dying miner scratched on a piece of paper while trapped in a mine. Diana followed with “Pony” a song told from the viewpoint of a young Native American girl in the 1920s who is forced to assimilate to a life and culture that is not her own. She ended her set with a song from her brand new release Museum of Appalachia Recordings. Diana combines traditional mountain and old-time sounds with a literate, character-driven brand of storytelling. She will be appearing in NYC at Hill Country NY on Monday, November 4th. I highly recommend getting tickets to hear this great talent. Click here for ticket info

Fiddler Deni Bonet and singer and AWoW cofounder Niamh Hyland accompanied Ed Romanoff on four tunes.  Mixing humor and warmth with darker tones, aided by two very accomplished musicians, Ed’s songs,  stories of the human condition, captivated the audience. Niamh closed out the set with a touching, soulful tribute to her mother Margaret and grandmother Sarah by performing the old Irish ballad: “The Parish of Knockmore.” She followed it with a haunting and powerful version of Alanis Morissette’s tune “Uninvited”.  Beautiful singing and a voice that can go from zero-to-sixty in a heartbeat.

Ron Vazzano read from his books of poems Shots from a Passing Car, in a an exuberant and energetic manner, in the best tradition of spoken word performance. His satiric and cutting edge style was most evident in “Blue Sky Session At Morning,” which recounts moments in time from his previous life as an advertising executive. This piece especially elicited an hilarious response from an audience, obviously attuned to the “Mad Man” culture.

We were pleased to have Jenai Huff join us again last night.  Jenai played three songs from her new EP Grace and Elbow Grease.  The first song was the title track, followed by “Make This Be” and closing with with “Come Home.”  Jenai’s songs are about life, love and loss and she clearly has a reverence for them.  Her pure and soulful voice and big smile coax the listener to relax.

The evening concluded with a tour-de-force performance from a work written by the very talented actor D.J. Sharp. His portrayal of Tennessee Williams in his final three days of his life at New York’s Hotel Elysee was spellbinding and brought down the house. A brilliant end to a night filled with one great performance after another.