Long Ago and Far Away: Written by Jerome Kern and Ira Gershwin, recorded by Jo Stafford

Recently, my friend Richie Raskin posted a photo–third below–of his mother and father “nightclubbing” in New York City during WWII. I’ve spent a lot of time over the years enjoying the photos I have of my mother, father and my family that were taken during the war and shortly thereafter. The photos, the music and the stories evoke in me warm feelings of many whom have passéd on. Here are some “1940s’ photos of friends’ parents and grandparents, including some thoughts. (To see a full sized version of the photo, click on the photo. When it opens click again.) 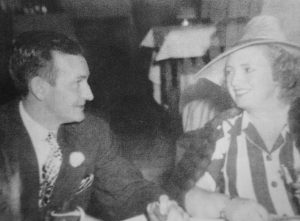 “This photo of my maternal grandparents, Peter and Helen Gallagher, was taken in NYC, but I’m not sure where.  I think some of Gallagher Brothers’ tugs and barges were used in the local war effort. My mother told me they were lean years and my grandfather would travel to DC to sign contracts. I think he was an officer in the National Guard. He never went anywhere. I think he just rode a horse in parades. My mother remembered when the fleet returned to NYC harbor there was a huge celebration and she got to ride a Gallagher tug with my grandfather and meet the fleet as the ships came in. She remembers the fire tugs spraying water in the air. She was thirteen.”  Jim Rodgers 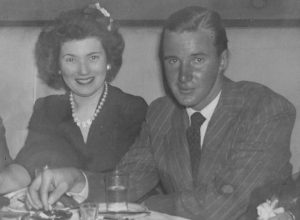 “These are my parents Beatrice (Psaki) and Thomas MacDonald on a date in a photo taken at New “51” Club in 1943. My mom was attending Misericordia Nursing School in the Bronx at the time. My father was an operating engineer so he’d come and go depending where his work would take him. He was in the SeaBees in the Navy during WWII. My mother grew up in Forest Hills, NY and my father was from Brockton, MA. They met at the 1939 World’s Fair.  My mom lived within walking distance to the fairgrounds and my father was working there. Mom was 17 and dad was 21. That was the start of their romance that spanned from 1939 through nursing school, my father working in Scotland and Cuba, and in the US Navy during World War II. They married in 1945.”         Maureen MacDonald 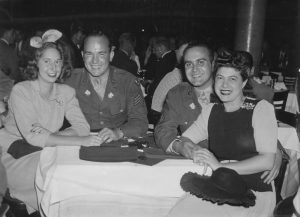 “I dont have much information on the nightclub photo as I just came across it a few days ago. It was taken before my parents (the couple on the right) were married, probably in 1941 or 1942. My mom looks very young and she is not wearing a ring. She and my dad married in 1943 on November 6th. I know they visited the Copacabana as we had ash trays with the Copa logo on them. Could be the Copa, but I’m not certain. Dad was a trumpet player and he traveled through Europe entertaining the troops. He even appeared with Bob Hope.  My dad would sometimes have his “army buddies” come over to our Glen Oaks’ apartment; I remember the lifelong camaraderie that existed between them. I think I’ll frame this photo. It’s so vibrant and alive.” Richie Raskin
—–

“My father, US Marine Staff Sargent Warren L. Keer, returned from WWII to NYC in 1946.  He found work as a union painter and was contracted to paint my mother’s Yorktown apartment.  They married 32 days later in the Little Church Around the Corner on October 26, 1946.  Though I was never able to confirm this with my mother, I believe this photo is their wedding “reception”, celebrated by just the two of them that evening in an Upper East Side bar.”   Karen Keer 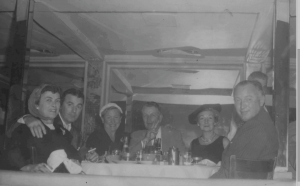 “I just went to my mom’s and we dug up this picture of her father, Harold (2nd from left) and her mother, Madeleine, (2nd from right). The picture has no date, but my mom was born in ’37 and she believes that this was taken in the 40’s. My grandmother, Madeleine Lowrie – Mimi to me, Maddie to her friends – was an interesting woman. I’m sure her husband chose her because she was fun, social, and quite intriguing. She was born in England in 1907, moved to Canada around 1913 and then to NYC where she started school at Parson’s School of Design. She was 17. She met my grandfather Harold Kelley there, where he was working as a stock broker on Wall Street. I always knew her as an artist. I remember watching her sketch and thinking, “I’d like to try that.” So, I did, much to her delight. Everything she touched was made elegant and special. She was probably my most influential mentor.” Betsy Cross 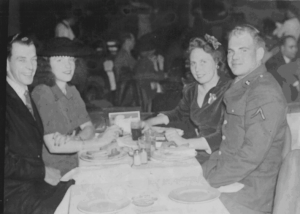 “My mom, Evelyn Gunn, is the second from the left.  The gentleman to her left, Bill, is not my Dad; she wasn’t married then. She would always tell us stories about going into Manhattan to meet the soldiers. The other woman, Marge, with a man named Joe, was a very good friend of my mom. I love seeing the pictures from the ‘40’s. It gives me a good insight as to who she was as a young woman.  My mom was very glamourous and took care as to how she looked.  Even when she was dying she put her “face on” as she called it, putting on make-up until she no longer could.” Denise Gunn

“This photo was taken in NYC at Tony Pastor’s.  The couple on the left were Gloria and Bernie Bronheim before they were married. She was Gloria Kamenkowitz at the time. Bernie passed away when he was quite young. That’s my father Jack Goldstein and my mother Renee Brenner on the right, on their first date.  My mother remembers there was a piano with live music. And she remembers that they could smoke in the clubs. Even cigars and pipes.  I remember my dad said they would drive to the club and before he passed he told me that this was “the club. Eventually my parents eloped in Reno, Nevada. They then combined business and pleasure and left for a meeting in California, traveling across the country by train in a “sleeper” car.” Diana Laatu

“My mother, Dorothy Gorman, (far left) and my father, Charles R. Hale, loved nightclubs. Any place with a piano. I have no doubt that Mom knew the words to every song written in the thirties, forties and fifties. I think this picture was taken in 1946–Mom would have been seventeen–after my father returned from the South Pacific where he was a pharmacist’s mate aboard the aircraft carrier, USS Antietam. The couple on the right are my mother’s sister Florence Gorman and my father’s cousin Jim Steproe. Within two years each couple married.” Charles R. Hale Jr.