“No question, if you weren’t there, you missed out on the wonderful and talented performances of a fine group of artists.” Vin Nauheimer

Kathleen Frazier opened the AWoW Showcase with a riveting reading from her memoir in progress, Somniloquies: The Mysterious Makings and Recovery of a Sleepwalker. Kathleen described how her somnambulism turned dangerous at adolescence when her oldest brother first attempted suicide – a sort of nighttime mirroring of his waking pain – and her failed efforts to self-medicate with alcohol. Kathleen’s proposal is currently being shopped to publishing houses… fingers crossed.

In the words of playwright Arthur Miller, “The audience sat in silence before the unwinding of All My Sons and gasped when they should have…” John Moran and Jason Kirk gave excellent performances as a father and son, bravely grabbing this American classic and wrestling it to the ground. John and Jason asked that we express their gratitude to Artists Without Walls for providing a forum for their development. They said they feel honored to be working with the group’s incredible talent.

Michele Cetera read from “Mickey’s Girl” a section from her monologue memoir. “Mickey’s Girl”  is the poignant story of the night Michele’s father was mugged and murdered in May 1975. Michele searches for closure, left with the feeling she did not have a chance to say a proper goodnight to her father. On Monday night she said it in a very special way, through dance, a gift she received from her mother and father. “Dancing celebrates life and the passion to live it.” Michele said, “On the dance floor, there is always a center and light and its one of the happiest  places to be.” With her dance partner, Harry Dominicci, Michele celebrated her father’s life and finally got to say “I love you and goodnight” to her father through the rhythms and energy of a salsa dance. 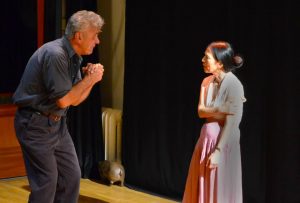 A few months ago, Nancy Oda was part of a scene study group conducted by veteran actor Jack O’Connell. On Monday night Nancy and Jack gave a reading from Eugene O’Neill’s Anna Christie, which they had worked on in the study group. In the scene they chose, Matt tells Anna he has signed onto another ship that will take him far from her, setting off a near deadly confrontation. A dynamic performance by two very talented actors.

First time performers MbiraNYC enlivened the Showcase and delighted the audience with their soulful harmonies, beautiful melodies and complex polyrhythms. The traditional songs of the shona people from Zimbabwe, played on the metallic prongs of mbira, accompanied by rocking percussion, brought people to their feet in dance. It was a wonderful taste of Zimbabwe in Chelsea.

Michele Cetera and Harry Dominicci dancing to the sounds of MribaNYC

Honor Molloy, author of Smarty Girl – Dublin Savage, and marvelous actor Caroline Winterson read “The Deadevens” in which Noleen O’Feeney waits in the Rotunda Maternity Hospital for her mammy to come out from a visit to the doctor. It’s there in the waiting room that a roadwoman shares an Aerobar and tells her an ancient tale Irish endurance. Wonderfully spirited performance by two great talents.

A scene from Joe Davidson’s play the Rekindling drew plenty of laughs as the foul mouthed Nancy Morris threatened to have her husband  Barney Morris incarcerated by exposing an old secret in a game of emotional ping pong. Nancy Morris was performed by Mary Tierney and her husband Barney Morris was played by actor Ron Ryan. Both actor’s performed brilliantly bringing an unmistakable chemistry and energy to this comical yet tragic marriage.

Ray Lindie followed with a stirring performance of the opening soliloquy of Richard III. Ray said,  “I think it was probably my best presentation of the piece and I credit the ambiance of the theatre, created by our members and friends, for allowing all presenters the latitude needed for their best performances.” Actress Mary Tierney said, “Best Richard I’ve seen, including some prime-time actors.” Great work.

Singers/songwriters Tara O’Grady and Sasha Papernik, who recently tourned together in Montana, closed the show.  Sasha, accompanying herself on the piano, sang “Kiss Me Faster” from her upcoming album.   Sasha and Tara then sang a beautiful duet, “Black is the Color” off of Tara’s Celt in the Cotton Club album. And thus, an evening filled with diverse and eclectic talent, ended on the perfect note.

The next Showcase will be at The Cell Theatre, 338 W 23rd St, October 22, 7pm. For more information about Artists Without Walls write to info@artistswithoutwalls.com