I am a screenwriter and playwright, 34 years old, born and raised in Israel. In December 2012 my wife ‘imported’ me to New York and since then I’ve been adjusting to my immigrant status.

In Hebrew my name means “One who gives shelter.” I am named after my late grandmother, a holocaust survivor who suffered the horrors of WWII, a time when many were desperately seeking shelter. More than all, I hope that in some way I’m embodying the meaning of my birth name. 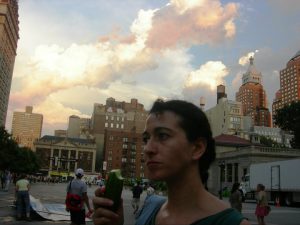 What are you currently working on?

I’m trying to raise money for my play “The Second Invasion of King George III,” a site-specific play to take place at Governors Island. The play begins with the resurrection of King George III, who returns to America in order to liberate its people from the flawed and faltering contemporary regime. Liberation, however, is not peacefully achieved. The King’s army takes the audience as prisoners of war and over the course of this hour-long military operation the audience members are forced to endure the physical and psychological realities of war.

I’m also writing a play commissioned by an Israeli director. It’s inspired by the latest Israeli government decision to change the portrait on the money bills to those of the greatest Hebrew poets. This decision is very ironic, since the current Israeli government is the most capitalistic government Israel has ever known, and those poets were extreme socialists. This irony gives me the opportunity to discuss on stage the gap between money and ideals, materialism and spiritualism. The discussion is facilitated by examining the poets’ works as well as their motives. 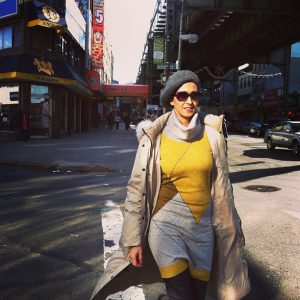 What honors have you received for your filmmaking?

“The Israeli Cinema Testimonial Database” a project I produced for several years, received The Art of Cinema Award, from the Israeli Ministry of Culture and Sport.

I was the winner of the Tel-Aviv University pitching contest in 2007, and was a finalist at the 2007 Tel-Aviv International Student Film Festival Screenplays Contest.

Who are the filmmakers you admire?

Christopher Nolan. He is a master at the craft of storytelling. All good stories are riddles, but the challenge is to present your audience with a riddle they hadn’t encountered yet. Nolan does this brilliantly.

I also admire the many anonymous screenwriters of the major film studios of Hollywood’s Golden Age, who gave us “Casablanca”, “Singing in The Rain”, “The Wizard of Oz” and so many other great films. These unknown screenwriters were employees of a complex industry; many times they wrote only a single draft and had no further influence on the final script. But in a miraculous way, this system worked and created some of the best movies known to this day.

Who or what is your greatest inspiration and why?

It is hard for me to choose one that is the greatest; I find that in different periods of life I have different inspirations. Throughout my film studies I was very inspired by the movie “Hedwig and The Angry Inch”, by John Cameron Mitchell. It had the perfect combination of great music, humor, sensitivity, clever storytelling and directing, but more than all boldness. It gave me the courage to set free crazy ideas I had and write them down. Until this day, my best pieces of writing are those in which I dare to be bold.

The current piece of work that inspires me is the show “Sleep No More.” As with this work, I wish to create a theatre that constitutes an experience for its audience, which is beyond the text and the dramatic principals. I still don’t have a thorough answer for how it’s done, but I’m exploring it and it fascinates me. 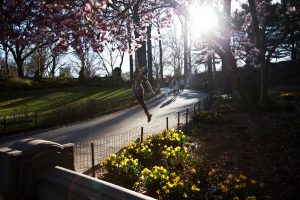 What have you learned from screenwriting that also applies to life in general?

Every change in life requires a metaphoric death in order to rebirth as a changed person; every protagonist in every story goes through this cycle. Once I realized this, it became easier for me to go through changes in life. I try to see difficulties not as a downhill slope, but rather as an episode in a cycle of change, in which I grieve for what I have lost, yet I anticipate the resurrection that follows. 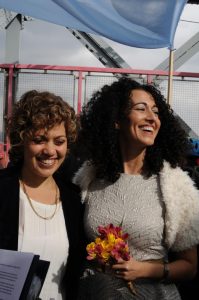 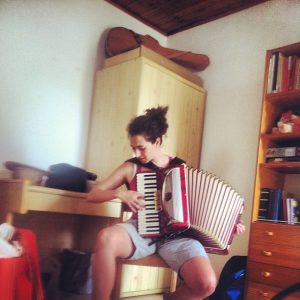 It wasn’t exactly a gift; it was a rented VHS cassette of “The Sound of Music” that my parents brought home when I was six. That is when I fell in love with the cinema, the character of Maria, the voice of Julie Andrews, the music and the landscapes of Salzburg sucked me into a fantasy world. I realized how exciting the cinematic experience could be and I looked for it everywhere. Looking back, that was when I started to develop my artistic taste