“I can’t stop rewinding last night in my mind! What an incredible cast of talent, surrounded by an audience in awe. A truly magical evening. Thanking you over and over.” Barbara O’Connell

With a brilliant sense of comedic timing and heart, Nadia Manzoor kicked off the evening with a hilarious segment from her one woman show, Dirty Little Paki. Nadia’s segment featured both the aspirations of a five year old and the cultural limitations faced as a woman.  Her story of a Pakistani girl facing the dichotomy of a strict Muslim upbringing in free-spirited London is both universal and intensely personal.  I first saw Nadia performing in Brendan Connellan’s Pompa Pompa earlier in the year and just as her humor, intelligence and charm shone through then, it did so again on Wednesday night. 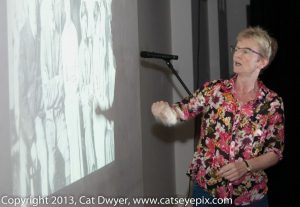 Dr. Eimear O’Connor followed Nadia and held the audience rapt with a slide presentation that featured the art of Irish born Sean Keating. The art teacher you always wanted, Eimear presented a picture of Keating, his projects, his expansive career and his overtly political paintings with an ease and wit that brought Keating’s work to life. Sean Keating: Art, Politics and Building the Irish Nation is a book that is richly illustrated with over 200 color paintings, sketches, and photographs, and the definitive work on this hugely respected, yet controversial Irish artist. 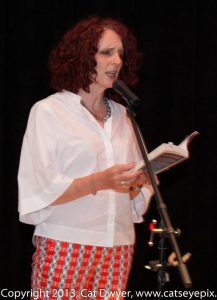 Best selling author and award winning novelist Maggie O’Farrell, whose most recent award was the Costa Novel Award in 2010 for The Hand That First Held Mine, gracefully read from her latest novel Instructions for a Heat Wave, the story of a family that is falling apart and coming together and the truths about who they really are. Earlier, Maggie said, “I’ve always been interested in how extreme weather affects behavior.” Maggie combined that interest with an interest in dyslexia and her own life long stammer to develop her novel’s main character, Aoife.

Incorporating humor and edginess, violinist Deni Bonet dazzled the audience with her breathtaking virtuosity. Beginning with “Last Girl on Earth” from the CD with the same title, Deni moved into a sizzling violin solo called the “Goddamn Violin Solo,” so called, as Deni laughingly said, “For lack of a better name.” Deni concluded with a foot stomping, rocking “Alone.” Deni will be playing every Tuesday in August at the Garcia’s Club at the Capitol Theater in Port Chester, NY.  The show is called “A Tribute to Old and in the Way”.

Pamela Herron began the second half of the evening with a dance, a very moving, untitled, Butoh solo that she performed with a grace and intensity that echoed throughout the space. She dedicated the piece to the healing of an artist she has been collaborating with since 2009, Jogyo (aka/ Dru Barnes) who recently suffered a brutal attack that took his left eye. Enthralling, heart wrenching, and spectacular. 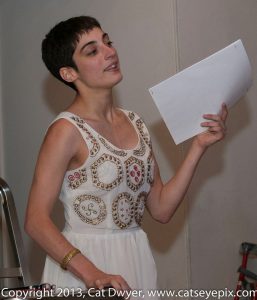 Poet Liv Mammone is a vivacious young voice that will be heard on the New York performance poetry circuit for years to come. Using her background as a novelist, she uses various characters, including Venus de Milo, a fictional gangster, and a certain part of her own anatomy, to provide insight into what she calls “all the million ways one must be moved; the changes we make on our migrations through the world.” Her poems were titled “Venus de Milo answers a Tumblr Feminist,” “Elegy for James Darmody,” and one of the funniest poems imaginable, the laugh out loud “Vagina Resigning.”

Playwright Brendan Connellan ended the evening dipping into crazed, frenetic prose, racing through some fresh and fun thoughts on his visit to Japan. Brendan touched on scraping away calf muscles, Perry blasting his cannons at Japan’s gates, foreigners being welcome but only if they leave quickly and Joseph Stalin turning out to be a friend with benefits.