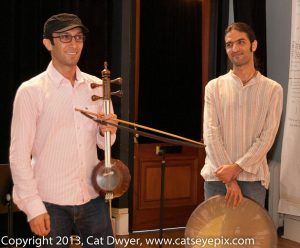 Iranians Navid Kandeousi and Mehdi Darvishi began the evening with a rhythmic improvisation. Navid wrote the work for an ensemble but for this performance it was arranged for the “kamancheh,” played by Navid, and the “daf,” a percussion instrument and the most common instrument in Iran, played by Mehdi.  The work, calling on traditional Persian folk tunes, included complex passages and difficult bowing techniques, which were perfomred by Navid with dazzling results.  Mehdi’s accompaniment was perfect, calling upon subtle forces to transmit great energy. A dynamic opening to the evening.

Carl Capotorto, “Little Paulie” Germani in the Sopranos, expressed his gratitude to the group for allowing him a few moments to honor and remember his friend and colleague, James Gandolfini. “Thank you so much for allowing me the opportunity.  And I was delighted to read a few pages from my book for the wonderfully diverse and highly sophisticated audience. It’s great work that AWoW is doing!” And thank you to Carl for sharing this thoughts on the Soparanos and James Gandolfini, and for his witty reading from his memoir Twisted Head.

The Leni Stern Trio, which includes bass player Mamadou Ba, percussionist Alioune Faye and jazz guitarist Leni Stern, has recently written a set of ten songs that are based on old traditional Senegalese rhythms, blended with sounds of blues and jazz from America.  The songs they played on Tuesday were from that project, one of them performed for the very first time in public.  The trio will soon be traveling to Senegal to record their next album with a group of local percussionists, but they can be heard next Tuesday night, July 2,10pm, at 55 Bar on Christopher Street in New York.  Commenting on the diverse mix of talent that was presented throughout the evening Leni said “I was especially moved by the two young poets, Koro and Ciara.  What spirit!”

Back from a trip to Ireland where she was awarded the Poetry Award at the prestigious Listowel Writer’s Week, Connie Roberts introduced the two young poets, Koro Koroye and Ciara Thompson. Connie, while a professor at Hofstra University, was instrumental in shaping the paths of each of these rising stars. Spoken word artist Koro Koroye, who has dazzled the Showcase audiences in the past, performed her poem “My Name,” with power and verve, while Ciara Thompson read five soulful poems, which reflected on her life and her experiences. Two great young talents. 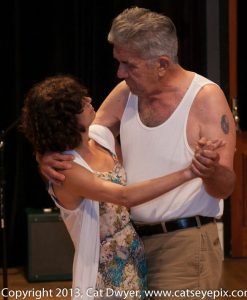 Michele Cetera and Jack O’Connell acted the closing scene of “Frankie and Johnny In The Clair DeLune. “ “What made this exercise very special was that it was the first time Michele had ever tried this off book,” Jack said.  “We practiced this scene many times outdoors in parks from Greenpoint to Central Park. Michele translated her personal life right into the shoes of her character “Frankie” with brilliant results.”  And, as always, Jack who played Johnny, was perfect in his role. Ray Lindie handled the music in this wonderful scene from Terrence McNally’s play.

Catahoula Cajun Band played rocking two steps and a sweet waltz, which enticed audience members to jump up and dance.  Catahoula is a New York-based group that plays Cajun dance music of Southern Louisiana. While all the band members hail from north of the Mason-Dixon line, their love of the rocking two-steps, sweet waltzes, and soulful blues of Acadiana inspired them to bring their Northern take on this Southern sound to the parks, streets, and subway platforms of New York. They delighted the audience with toe-tapping, infectious rhythms, perhaps inspiring a pop-up Louisiana dancehall on a street corner or two.  Great music. 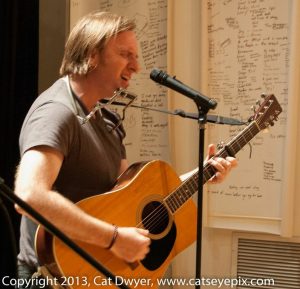 Matt Keating ended the evening with a few of what TimeOut London calls his “beautiful and honest songs of substance and melancholy”.  His first song, “Maker of Carousels,” from his most recent album, Wrong Way Home (Sojourn Records) was a moving tribute written after Matt read an obituary about the man who designed the Bryant Park carousel.  Matt followed “Carousels” with some amusing banter about nitrous oxide abuse as he finished the evening with his Willie Nelson-esque ode to summer jobs and un-requited love, “Between Customers.”  Time ran out on the evening–it felt like we were just getting warmed up–and Matt left the crowd wanting more. You can hear this outstanding musician and his band playing these tunes and others on July 10th, 8pm, at The Living Room in New York City.

The next “Showcase at The Cell” will be held on July 31, 7pm. For more information on becoming a member click on “Membership” above or write to info@artistswithoutwalls.com