Who is Don Creedon?

Due to recent overexposure to mystical readings (and Flan O’Brien), Don Creedon is beginning to suspect that he only exists as a product of his own imagination.  That imagination currently tells him he is a playwright, screenwriter, director, actor, and producer, originally from Dublin, Ireland and now living and working in New York.  His plays include The Lobby, Celtic Tiger Me Arse, Shackled, Divine Intervention, Dry Rot, and Guy Walks Into a Bar (winner Audience Award for Best Play 1st Irish Festival 2010).  Imagined screenplays include A Very Married Man, Mir Friends, and Work of God.  He also seems to have directed numerous other plays and is the president/founding member of Poor Mouth Theatre Company, which appears to be based in An Béal Bocht Café in Riverdale, the Bronx.

A reading of a new rewrite of my first play The Lobby, an Irish comedy farce.  This reading will be public, not just in my own head.  I think.  Date and venue TBD.

Guy Walks Into a Bar – with Bill Rutkoski and Walter Michael Deforest, written and directed by Don Creedon

The Misanthrope, Noises Off, Loot, Juno and the Paycock, The Beauty Queen of Leenane, Much Ado About Nothing, To Be or Not to Be, Bringing Up Baby, The Philadelphia Story, Father Ted, Nurse Jackie, Arrested Development, Fawlty Towers, any Laurel & Hardy.

Bob Dylan, for his timeless imagery, unique mode of expression, continuing relevance, complete disregard for public opinion, his “never-ending tour”, and the relentless pursuit of his vision.  I consider him today’s Shakespeare. 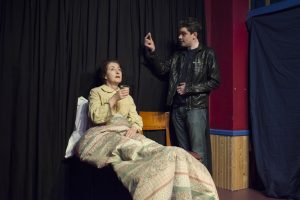 An A for an English essay in secondary school.  (In Ireland, A’s for anything are quite rare—they don’t like to over-encourage!).  Before that, I didn’t know I had a “voice”.

One thought on “"SPOTLIGHT ON" PLAYWRIGHT/DIRECTOR/ACTOR DON CREEDON”