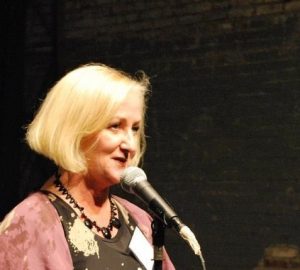 Who is Kate McLeod?

I grew up in a small town in southeastern Massachusetts and lost my father, who I adored, at age nine.  Post loss-of-parent, I spent considerable energy rebelling against my catholic/catholic boarding school life—shortening my uniform skirt to unacceptable lengths, smoking, running away from school, and drinking beer.  My other extra curricular activity involved being on stage whenever there was something dramatic or musical happening. Oh, yes, and I learned stuff.  I’m always trying to learn—that’s what so great about being a journalist.  You’re always finding out new things or looking at something from a new angle.  I saw New York when I was about 10.  It was the proverbial love at first sight.  So I grew up—up to a point.  I took a few wrong turns and finally got to New York and I’m not leaving.  Then, I did what I thought I couldn’t do—I became a writer.

A revision of a play I wrote last fall.  The play features two teenage girls who are best friends. Their relationship falls apart over their changing beliefs.

And a revision of a musical I wrote entitled, “I Heart My Car.”  I’m working with a fantastic composer, Rob Hartmann.

I just had a reading of my play Ice Floes or don’t stay, please go, no wait . . . on May 11th at the Hudson Opera House in Hudson, NY.  I will be having a reading of Darwin Day—the new play––but probably not until the fall. 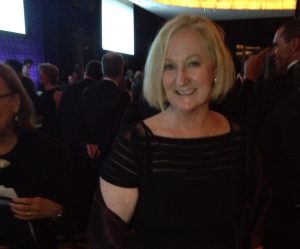 Who are the playwrights, past and present, you admire?

There are many.  Certainly Samuel Beckett has been a big influence. Tom Stoppard’s plays have always made me think. I love his ideas and constructions. When I went to see the revival of Awake and Sing on Broadway a few years ago Clifford Odets’ work really astonished me.  I went because “his plays were historically important.” But what I experienced was the work of a master of our craft who led me to feel deeply for his characters. Recently I loved the production of Golden Boy.  Others: Edward Albee, John Guare, Tony Kushner.  The Bard.  David Ives.  David Lindsay-Abaire. Playwright, Arthur Giron, who has mentored me from the start.  I love Annie Baker’s dialogue and the way she fills silence and understands how people talk about their personal disappointments.  She draws us in so that her characters problems directly connect to our own.  I recently read a great book by Frank Gilroy, “How to Write for Love and/or Money.”  Gilroy is a terrific playwright (The Subject Was Roses) but this book is something I’ll read again and again.  Just the way he lays it down on the page.

What are your three (more if you like) all-time favorite plays?

For different reasons and in no particular order:

Rosencrantz and Guildenstern are Dead

Who/what is your greatest inspiration and why?

John Kennedy when I was a kid because of the how he brought people together in pursuit idealism—ask not, etc.  He asked us to work for a better world. I was committed.

For the past 27 years, my husband, Jerry Flint, who died in 2010.  He was a great journalist, iconoclast, wonderful writer, and a fearless, relentless reporter and later, columnist.  And he believed in me.  That gave me the courage to keep working towards becoming a better writer. He was a wonderful editor—read all my stories when I’d finished them and gave me feedback.  He taught me so much about writing.  I miss him.  When Jerry died I founded a scholarship/internship in his name.  It was fully endowed within eight months and I have now three scholars who have been awarded the scholarship from the Overseas Press Club Foundation.

1. Get the musical produced.

3. Launch  a program I created called “What’s Your Story,” a week-long theatre workshop for disadvantaged kids.  It aims to tap their creativity to, not only tell their stories, but to help them understand that the stories are an important part of the fabric of our society.  We’ll do exercises and write in dramatic form. It culminates in a performance brunch open to friends and families. I hope to pay them each $50.  I’m doing the first one in July at the Hudson Opera House and then I want to create a guide and give it away to interested communities around the country.

4. Learn how to sing.  I’ve always sung, but I’m learning how to use the instrument now.

5. Get the 1961 VW Bug I bought, running.  I’m going to take it apart and put it back together.  And I’m thinking of turning the project into a reality show.  Seriously.

1. Okay, fantasy land? I’d like to work with Peter Brook and his group and improvise an entire play. (He’s 88 and lives in France so this is a dream.) I’d love to do the same with Mac Wellman.  And he lives in Brooklyn!  I get to have puppets, a live orchestra, and as many actors as I want.

I don’t think of time as spare (as in extra). Occasionally, I try to sit down and just sit down.  It never works out because I invariably come up with an idea.  Or I’m reading or writing. I love to cook and put great, interesting, different people together over a good meal.  It’s an act of love and it is very satisfying to create conversation and good energy.  Aside: My rhubarb pie just won second place in a Rhubarb Fest!

Some of my colleagues at Artists Without Walls know that my day job is being an auto writer.  You can—and should—join my blog Girl Driver USA. People who don’t care anything about cars say that they enjoy reading it.  You don’t have to read it.  Just join—become a follower.  I need the followers.  Also, the Overseas Press Club Foundation