Who is Maria Deasy?

Maria is an actress, singer, sometimes a writer, and always a lady. She’s performed Off-Broadway, on TV, and in award-winning independent film shorts around the world.  She’s been a swing dancer for Woody Allen, a Vietnam War widow for Barry Levinson, a stunt double for Julia Roberts and a stand-in for Courtney Love.

What’s In A Name by Timothy Nolan to be produced by Variations Theatre Group at The Chain Theatre in L.I.C. in April. I play a character loosely based on Katherine Ann Power, a middle class Irish Catholic girl from Denver who was part of the SDS and the anti-war movement in the late 60s. She became involved with the Black Panthers and robbed a National Guard Armory and a bank in Massachusetts in 1970, during which a guard was killed. Like her, my character Aileen has an idealism that has led her to violent choices. She’s been living as a fugitive for 20-plus years, and raised a child as a single mother under an assumed name.  At the opening of the play we find her at the point of unraveling. It’s very interesting to me to think about a time period in U.S. history, given the resurrection of class warfare with the Occupy Wall Street movement.  I’ve been watching a documentary called “Underground” that films faceless interviews with members of The Weather Underground (including Bill Ayers, if you remember him from the 2008 election) while they were living “underground.”  It’s amazing to listen to their spiritual and philosophical commitment, but also to have the hindsight of a 21st century vantage point.  We live in a far more cynical world in general. 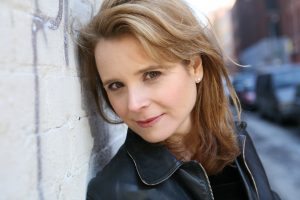 What are the top five things on your bucket list?

2.  I’d like to live half the year in Ireland and half in New York.  You can’t beat this city, but I crave nature and history and a certain sort of wildness.

3.  Have more animals in my life.  My apartment is a bit small for more than one pet, but it would be lovely to have a menagerie — and the free time to care for them!

4.  Initiate and/or produce more of my own creative projects.

5.  I’d like to create something based on, or about, my family.  They fascinate me.  My parents are from the West of Ireland. When my mom was in her 20s she came to the U.S. on a work Visa with her cousin.  They weren’t so happy in their jobs, so they ditched them and took a Greyhound bus across the country, stopping at Old Faithful and landing in Vegas — which they decided was Their Kind of Town.  They stayed for months working as change girls in the casinos — it was the 60s and they hobnobbed with Sammy Davis Jr., Dean Martin, et al. — and left not long after JFK’s assassination.  It was a pivotal time in America’s history experienced by two Irish girls from County Mayo.  When she returned home, she decided to marry my father (whom she’d known her whole life) and further decided that they must move to the U.S.  She comes from — to my mind — a very glamorous family.  Her seven brothers and sisters — my aunts and uncles on the Gallagher side — are gorgeous, funny and fun.  My father comes from a very academic and religious family — with their own quirks. My Great Aunty Annie lived in my father’s family house, and her sisters, my Aunties Bea and Katie lived across the street.  These ladies had a car before many did, but they could only go places together.  Katie knew how to drive forward, and Bea knew how to drive backward. Annie was a whiz at calculus. I’d like to give voice to their stories.

Joe Rubin and Monica Landry, my teachers.  They work with Sensory Feedback Technique, and we speak weekly.  They are immensely generous, wise and kind. They have taught me to listen to my own inner truth.

What picture do you like to stare at and why?

“Meeting At The Turret Stairs” by Robert Burton.  I have a postcard of the painting; the original is at The National Gallery in Dublin.  For years you had to make an appointment to see it, as it is a watercolor and protected under cover.  (I think they’ve recently put it in a special cabinet for limited viewing.)  I just love how romantic and passionate it is.  The colors are so vibrant.  And it was a favorite before I knew it was by an Irish painter!

If you could dream of trying something in the art you haven’t tried, but would like to, what would that be?

Rock n’ Roller.  Musicians are so much cooler than actors.  They don’t get all up in arms about how they’re coming off or how in shape they are, they just do their thing.  Bruce Springsteen makes me want to run away and join the rock n’ roll circus.  The way he and his band-mates relate and play with each other is on a level of spirit that leaves me in a awe.   Also, if Elvis Costello needs a backup…

What was the best gift that someone gave you that inspired or facilitated an interest in you art?

Whenever someone comes to see me in something I consider it a wonderful gift.  But I have to call to mind my mother.  When I was 14, I had an audition for the local church production of Damn Yankees (go figure).  We’d never heard of the show, but she figured out that Lincoln Center had a Performing Arts Library.  One day when I was in school, she hopped a bus into New York City and got the sheet music for me. She did a lot of stuff like that for me. I got the part!