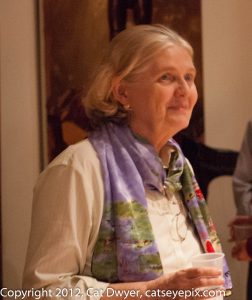 As befits the modesty of the multi-talented Martha Pinson, she recently wrote at the tag end of an email, “Not much else new. Oh, by the way, I’m making my big-screen directorial debut on a film called, Tomorrow. Scorcese is the executive producer.”

“You’re doing a film with Scorcese, Martha? Right, not much new!”

But it’s really not surprising.  In addition to her directorial skills Martha is an accomplished playwright, screenwriter and filmmaker. She has written a number of off Broadway plays in addition to several award winning shorts. Of one, Don’t Nobody Love The Game More Than Me, director Sidney Lumet said, ” I’ve just looked at Don’t Nobody….It’s wonderful. It’s so tender and funny and deeply touching, and because of the passions of the people in the movie, it’s somehow very romantic….It should be seen!”

Tender is a word that also can be used to describe Martha’s writing style. A number of months ago I read a touching tribute to a woman Martha loved and admired, her grandmother.  It is an exquisite piece of writing meant to be savored and read slowly. Grandmother from Dublin, Ireland

I asked Martha to comment about her latest success. As always, she deflected her well earn praise onto another, “I am extremely grateful for the support of Martin Scorsese, a great filmmaker and a great man who I have had the honor to work with.”