“A remarkable evening of front-line talent. Artists Without Walls encompasses the very best in music, dance and spoken-word. Entertainment in a thoughtful, respectful atmosphere devoid of posturing and ego. Quite refreshing. Bravo!”  Those were novelist Billy Barrett’s words at the close of Tuesday night’s Artists Without Walls’ Showcase. 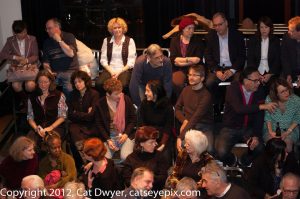 Earlier, before a standing room only crowd at The Cell in NYC, Billy led off the evening reading from his memoir in progress Highway Star. Slicing and dicing catch phrases and mixing his metaphors, as Billy might say, Billy brings each “reading” to a new level, a level of “performance art” filled with bravado and provocative prose. Highway Star is a vivid, poignant and gritty recollection of Billy’s youth. An edgy and entertaining start to the evening.

Chanteuse and accordionist Marni Rice and dancer choreographer Xio Evans combined to present a gripping short piece about gun violence called “Have You Seen My Son?” with original music written by Marni.  Costa Rican native, Xio, the director and founder of The Experimental Dance Theatre of Puerto Limon, and Marni, whose solo performance piece Tales from Paris has been performed all over the world, have also founded the the Xio Evans-Marni Rice Experimental Dance-Theatre, a performance project dedicated to issues of social injustice.

Honor Molloy followed, reading a brief clip of the concluding section from The Unnamable the third part of Samuel Beckett’s trilogy of novels, which also includes Molloy and Malone Dies. This is an example of Beckett’s drastic reimagining of the novel. He strips it down to pure voice, pure idiosyncratic voice, which Honor captures perfectly. Honor’s Smarty Girl-Dublin Savage, which was published in 2012 to great acclaim, will be appearing on the St. Paddy’s Day scene in March: Mike Farragher’s Rock n Read at Irish Rep on March 5th and the CraicFest at the Irish Arts Center on March 9th.

Award winning actress, Aedin Moloney, whose theatre company Fallen Angel Theatre Company is currently producing the highly praised play AirSwimming, now running at the Irish Repertory Theatre, stepped up next. Aedin read from “Molly Bloom’s Soliloquy,” the famous extract from James Joyce’s Ulysses. There are many who think Aedin is the finest performer in New York City of Joyce’s work and,  as we’ve come to expect, Aedin’s performance was thrilling, beginning slowly, picking up the pace and closing out in stirring and spellbinding fashion.

Intermission followed. “An audience-friendly intermission that could have lasted for hours,” actor Jack O’Connell said before he demonstrated his creative talents with a performance of Bob Dylan’s “Desolation Row” off of Dylan’s revolutionary album Highway 61 Revisited. Instead of reading Dylan’s words Jack became a bartender, sharing his observations with the imaginary Mr. Tumulty, a lone customer in the local saloon whose neighborhood has turned into Desolation Row. A moment of true creative genius.

Salina Sias, a Brooklyn based singer/songwriter, left her comfort zone by singing a cappella, mesmerizing the audience with verse and song.  She spoke of a disconnect with her own Mexican heritage, relating it to the unknown—a place where both beauty and fear exists—then sang “Meet Me in the Sun”, an original number off her upcoming second album. Salina closed with a song she wrote in Spanish, delivering a powerful voice reminiscent of an ancient soul, far older and perhaps wiser than her youthful visage would lead one to believe her capable of achieving.

Dancer/choreographer Darrah Carr, of whom Aedin Moloney said, “Before there was Riverdance there was Darrah,” followed Salina. Darrah, a professor of dance history at Hofstra University and respected scholar of Irish dance, combined film clips and observations to explain how she sourced from two genres, Irish step dance and contemporary modern dance, to create a new form of dance called ModErin.  Darrah spoke of how she feels two pulls, one toward tradition and another toward innovation, creating dance in the space between.  The video clips demonstrated both Darrah’s enormous skills as a dancer and the brilliance of her choreography.

Singers Tara O’Grady and Niamh Hyland, harpist Russell Brown and Charles R. Hale closed out the evening with an excerpt called “Who Am I?” from Charles’s work in progress, Breathing of an Ancestors’ Space and Time. The wonderful voices of Niamh, who sang “The Things We’ve Handed Down” and “Slumber My Darling,” and Tara, who sang “Summertime” and “Take Me Out to the Ballgame,” and Russell’s performance of Rodrigo’s Concierto de Aranjuez accompanied Charles’s memories of his ancestors, grandparents and father.  Niamh, Tara and Russell closed out the work with an evocative performance of “Fields of Gold.’

A grand evening. The next Artists Without Walls Showcase at The Cell will be on Tuesday night, February 26th.  There will, however, be announcements forthcoming regarding a number of AWoW events that are in the planning stage.